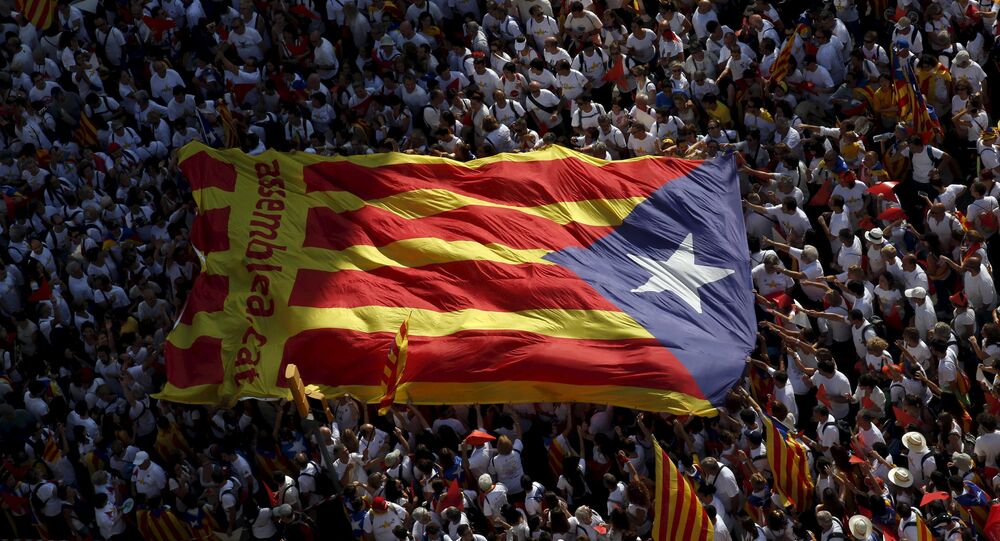 'We Can Do Better Than Spain:' Barcelona Calls for Catalan Independence

Following the UK's Brexit vote on June 23, Catalonians are asking themselves why they can't vote for independence too, Jordi Fabrega, mayor of the Sant Pere de Torello area of Catalonia, told Sputnik.

© AFP 2021 / Jorge Guerrero
Tensions Heat Up Between NATO Allies as Spain and UK Spat Over Gibraltar
On Wednesday Spain's Catalonia region became the latest region of Europe to push for independence, after lawmakers there approved a plan to secede from Spain.

Out of a total 135 Catalan MP's, 72 from the pro-independence Catalan Junts pel Si (Together for Yes) coalition and their allies from the left-wing Popular Unity Candidacy (CUP) approved the plan.

In elections in September 2015, Catalonia's pro-independence parties won an absolute majority in the regional parliament for the first time, and two months later the parliament put forward a resolution calling for a start of secession from Spain.

Pro-independence Catalan politicians are encouraged by the results of a non-binding referendum called by the Catalan government in November 2014, in which 80 percent of voters voted to secede from Spain.

More than two million people out of an estimated 5.4 million eligible voters took part in the ballot, which was nevertheless ruled illegal by Spain's Constitutional Court.

The national government, led by acting Prime Minister Mariano Rajoy, has also successfully appealed to the country's Constitutional Court to challenge the Catalan plan for secession.

According to a poll published last week by the Catalan government's Center for Opinion Research, the number of Catalan independence supporters has risen in recent months, and now outnumber opponents for the first time.

Jordi Fabrega, mayor of Sant Pere de Torello and spokesperson for the Esquerra Republicana de Catalunya (Republican Left of Catalonia) party, told Sputnik that the popularity of independence is a rejection of the government in Madrid.

© REUTERS / Andrea Comas
Podemos Threatens Spain's Unity By Backing Catalan Independence Referendum
Prime Minister Rajoy and his Partido Popular (People's Party), which has followed an economic austerity plan since 2011, have won the most parliamentary seats in two elections held in December and June. However, without an outright majority, the party has been unable to find enough parliamentary support to form a coalition government.

"Catalonians were really disappointed by the victory of Partido Popular in Spain's parliamentary elections. A lot of Catalonians voted for Podemos, which supports the right to autonomy and a referendum on the issue of Catalonia's status. However, those expectations were dashed after Partido Popular got even more votes (in the second election in June) than the first time," Fabrega explained.

"Brexit also played a part, a lot of Catalonians rightly asked themselves why some countries are allowed to decide issues with a referendum, and some are not. The majority of Catalonians want to decide the fate of the region by a democratic vote, and not a unilateral decision," Fabrega said.

"People want independence because the Spanish government is not listening, not reacting to their problems. There is a feeling that the lines of communication have been cut off. Economic problems are getting worse, recently Spain's national debt exceeded GDP, and nothing is being done to find a way out of this situation."

"In addition, corruption is getting worse. That's why the majority think that it is better to build a new independent country, to start from the beginning. Catalonia has great potential – it can become a much better country than Spain is," Fabrega said.