The International Monetary Fund (IMF) has released a damning report on the way its own staff failed to spot problems in the Eurozone, following the global credit crisis of 2007/8, and described the Greek bailouts a being ill-considered.

The report by the IMF's auditor said the organization "did not foresee the magnitude of the risks that would later become paramount" at the start of the sovereign debt crisis that saw several Eurozone countries — notably Greece, Ireland and Portugal — descend into financial crisis.

The IMF Independent Evaluation Office (IEO) just released an important report on the IMF's role in the euro area: https://t.co/sap2Mm2oAd

The report said that in May 2010, the IMF Executive Board approved a decision to provide exceptional access financing to Greece "without seeking preemptive debt restructuring, even though its sovereign debt was not deemed sustainable with a high probability.

"The risk of contagion was an important consideration in coming to this decision. The IMF's policy on exceptional access to Fund resources, which mandates early Board involvement, was followed only in a perfunctory manner."

© AFP 2020 / PHILIPPE HUGUEN
New Report Accuses IMF of EU Favoritism in Handling Euro Debt Crisis
During negotiations over the three Greek bailouts that followed the crisis, the report said that the IMF has become a "junior partner" to the European Commission and the European Central Bank — the other two members of the so-called Troika bailing out Greece.

It said the "IMF lost its characteristic agility as a crisis manager […and] supported programs in Greece and Portugal incorporated overly optimistic growth projections. More realistic projections would have made clear the likely impact of fiscal consolidation on growth and debt dynamics, and allowed the authorities to prepare accordingly or persuaded European partners to consider additional-and more concessional-financing while preserving the IMF's credibility as an independent, technocratic institution."

TIME FOR THE RESTORATION OF GREEK & EUROPEAN DEMOCRACY https://t.co/CoK0IM3vZC

​As the Eurozone crisis deepened, the report said: "Lack of analytical depth, rigor, or specificity and the failure to highlight sufficiently the need for stronger remedial action in a currency union were among the factors that undermined the quality and effectiveness of surveillance.

"At the euro area level, IMF staff's position was often too close to the official line of European officials, and the IMF lost effectiveness as an independent assessor."

Greece is currently negotiating its way through its third bailout agreement with its creditors. Having had to be rescued a third time, Greece is being given financial support in a series of tranches of money after meeting strict conditions on changes to its fiscal policy. 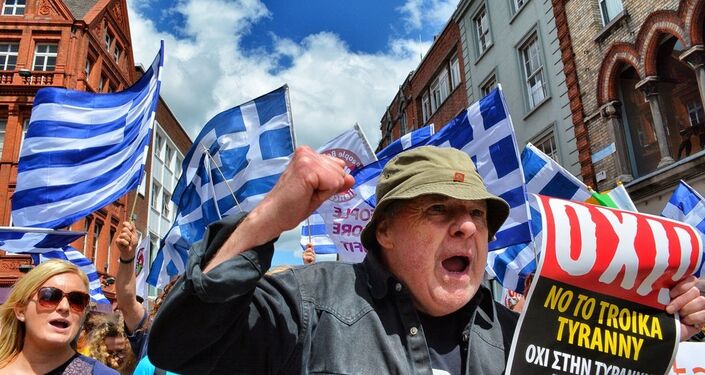 However, there have been disputes between the Troika members over the sustainability of what Greece is being asked to do, with the IMF not putting any money into the third bailout, which it says is "unsustainable".