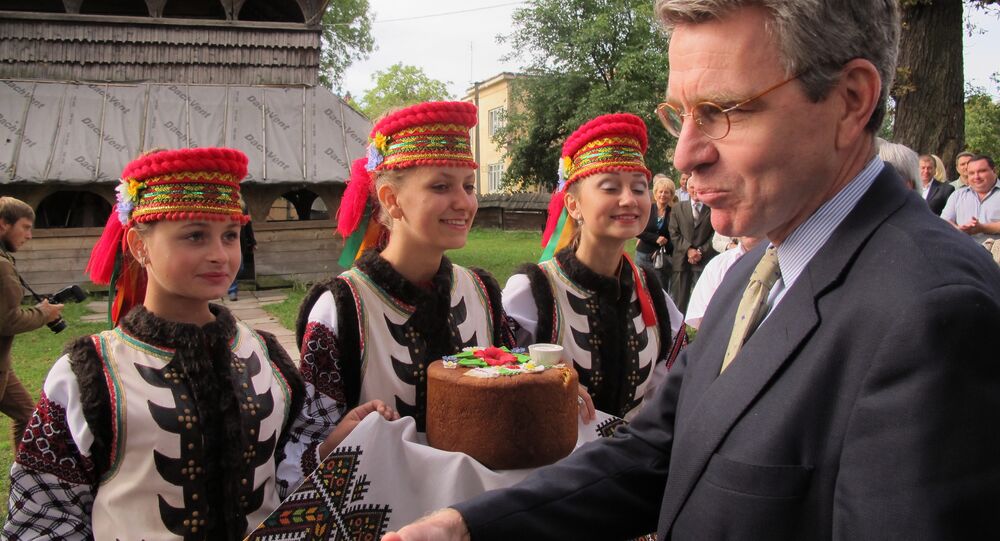 US Ambassador to Ukraine Geoffrey Pyatt is on his way out, having been confirmed as ambassador to Greece earlier this month. His parting words to Ukraine's leaders include comments on the country's great successes in achieving energy independence from Russia. Unfortunately, it seems that once again, it's what was left unsaid that really counts.

On Sunday, speaking in Odessa aboard the USS Ross, in town for scheduled US-Ukrainian naval exercises, Pyatt praised Ukrainian officials for their 'courage and resolve' in the struggle against Moscow.

"This is probably the last speech I will give in Odessa," the ambassador noted. "I was trying to think, what is the one message that I want to leave with our partners in this important part of Ukraine? And I think it's very simple: it's trust in yourselves and lean on the confidence you have earned through the courage and resolve you have demonstrated over the past two and a half years of conflict with Russia."

© Sputnik / Grigory Sisoev
What EU Gas Market Will Win From Nord Stream 2 Implementation
The diplomat emphasized that he was "enormously proud…as an American" for "the partnership that we have been able to forge with some very courageous and very resolved Ukrainian patriots. You have dealt with the worst Russia can throw at you and I know you are going to prevail."

Two days later, at a speech before the Open Ukraine Foundation, Pyatt dove into specifics of Ukraine's victories, saying that the country had effectively won its 'energy war' with Russia. "Ukrainians are not in a situation anymore where the Kremlin uses its energy resources as a weapon, as an instrument for manipulating Ukrainian politicians," the diplomat noted, according to the UNIAN news agency.

Pyatt pointed out that Ukraine had survived through the winter of 2016 without reliance on Russian gas supplies. At the same time, he noted, Naftogaz, Ukraine's national gas company, can now afford the luxury of purchasing Russian gas, but only if it finds the price acceptable.

Ambassador Pyatt is well known for giving his Ukrainian officials dubious compliments, from predicting Ukraine's status as a future 'agricultural superpower', to suggesting that the country could actually become 'a gas exporter'.

As to his latest comments regarding Ukraine's 'energy independence' from Russia, Svobodnaya Pressa columnist Svetlana Gomzikova suggested that Pyatt was either was either pulling Kiev's leg, or just patently misinformed. "Otherwise, he would have known that the reverse gas supplies Ukraine imports from Slovakia, Hungary and Poland also [originate in Russia]. Except it's being sold to Kiev by the Europeans, and costs more…"

"In principle, there are really no grounds for saying that Russia is waging an 'energy war' against Ukraine," the expert noted. "Just recall how many times Kiev has declared that it would never use Russian gas – that it would get by without it, that it was too expensive. And what has Russia's response been? Basically to calmly saying 'you don't want it? Ok, what's the problem here?"

"I don't understand where Pyatt sees this Russian 'war' against Ukraine. His conclusions are closer to the 'information warfare and ideological front' than the energy sector."

At the same time, Dudchak noted, the American ambassador is not entirely wrong, but not for the reasons he believes. "Ukraine's dependence on gas really has been reduced, regardless of where it comes from. The truth is that the country's economy needs less and less gas, since consumption has declined. Factories, facing a lack of demand for their products, are curtailing production. As a consequence, [at the current rate] we will soon be freed from any dependence on natural gas entirely."

© AP Photo / Efrem Lukatsky
Ukrainian Economy: From European Mega Power to Third World Backwater
Households have also cut down on gas consumption significantly after the government agreed to IMF demands to raise internal prices to market rates earlier this year. Some rural residents have even resorted to heating their homes, preparing meals and heating up water using wood stoves in place of gas.

"It was Pyatt who once said that Ukraine is a future agricultural superpower," the commentator noted. "In other words, it was once a great power that built airplanes and rockets. Now it has been grounded. But again, it's unlikely that the country will succeed in becoming a great power if it maintains its present course and its current leadership."

For his part, Eldar Kasaev, a member of the expert council of the Russian Union of Oil and Gas Producers, suggested that the American ambassador was perfectly aware of the real status of Ukraine's gas market, and its supposed 'independence' from the Russian gas market. "I think the American ambassador understands everything perfectly well. There's no way that he's out of the loop on the subject. Everything is being done on purpose," the analyst noted.

With the winter set to arrive regardless of Ukrainian or American officials' optimistic commentary, Kasaev noted that it's likely that Russia will be forced once again to intervene to provide regions of the country with subsidized or free energy supplies.

"In order to avoid a humanitarian disaster last winter, [President Putin] instructed Gazprom's management to provide fuel supplies for the freezing territories of Donbass, as well as Genichesk in Ukraine's Kherson region. We did not receive anything for this gas, but people's lives were saved. Now, the situation may be repeated, except this time on a larger scale," the analyst warned.