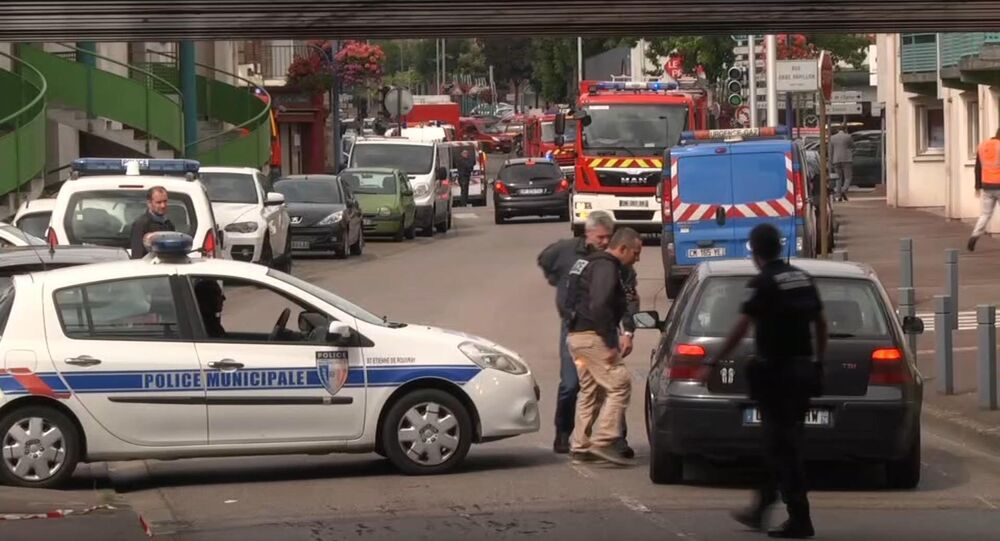 Turkey deported one of attackers in a church in Normandy from Ankara to Geneva and notified French authorities he had links with terrorism, according to a Turkish official.

MOSCOW (Sputnik) — Ankara deported one of the attackers in a church in Normandy and subsequently notified French authorities regarding the issue, a senior Turkish official told the Daily Sabah on Thursday.

On Tuesday, two armed men took five people hostage at the Saint-Etienne-du-Rouvray church in the Seine-Maritime commune. The attackers were later killed by law enforcement, while at least one hostage has died. The Islamic State (ISIL or Daesh) jihadist group claimed responsibility for the attack. Wuithin short time, the two were identified as Adel Kermiche and Abdel Malik Petitjean.

© REUTERS / Pascal Rossignol
Conference of European Churches Urges to Avoid Islamophobia After Normandy Attack
The official told the newspaper that Turkey was informed by France on May 12, 2015 that Adel Kermiche planned to travel from Geneva to Istanbul using the name Kevin Kermiche. Following the examination at the airport, the young man was banned from entry and deported to Geneva on May 14, 2015, immediately informing the French authorities.

"According to our records, he was sent from Switzerland to France on 21 May 2015," the source said.

Kemiche was identified shortly the attack, while Petitjean was identified earlier on Thursday. According to media reports, the police was notified of the latter four days earlier with a warning that he could be planning an attack.