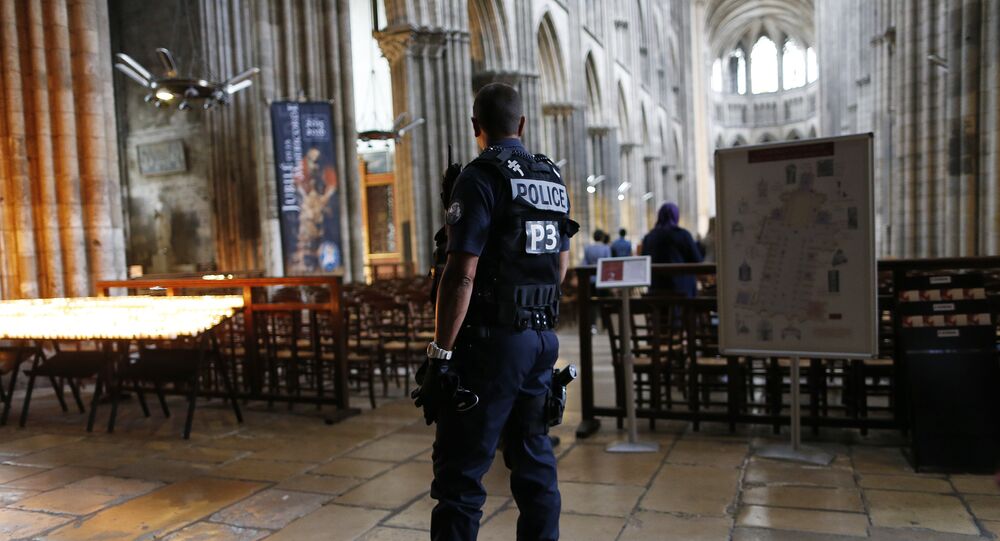 Ellen Fantini, executive director of Vienna-based Observatory on Intolerance and Discrimination against Christians in Europe said that churches that are sacred places, as well as historic and important symbols of Europe's heritage and civilization, may be attactive targets for terrorists.

© AFP 2021 / CHARLY TRIBALLEAU
French Prosecutors Identify 2nd Suspect in Normandy Church Attack
MOSCOW (Sputnik) — Following a series of terror attacks on the so-called soft targets all across Europe churches have also become vulnerable to attacks as they bear historic and sacred value for Europeans, the executive director of Vienna-based Observatory on Intolerance and Discrimination against Christians in Europe told Sputnik on Thursday.

"There is no question, given the recent targeting of ‘soft targets’ across Europe, that places of worship are indeed vulnerable. In fact, because many churches are both sacred places, as well as historic and important symbols of Europe's heritage and civilization, they may be more attractive targets for attack," Ellen Fantini said.

Fantini's statement comes against the backdrop of an attack on a church in northern France. On Tuesday, two armed men took five people hostage at the Saint-Etienne-du-Rouvray church in the French region Normandy, murdering the local priest Father Jacques Hamel. French President Francois Hollande said that the incident was a terrorist attack, adding that the attackers had pledged allegiance to the Islamic State militant group.

"Increased state funding of security for churches is certainly a response that each state should examine… Enhanced presence of police in public areas generally has, unfortunately, become necessary," Fantini admitted, adding that effective monitoring of those identified as radicalized was "equally important."

"The electronic surveillance bracelet Adel Kermiche [one of the attackers on the Saint-Etienne-du-Rouvray church] wore did nothing to save the life of Father Jacques Hamel," she said.

According to police, 19-year-old Kermiche was a local man who was known to intelligence services after failing to reach Syria.

Local Authorities in Netherlands to Decide on Church Safety Measures