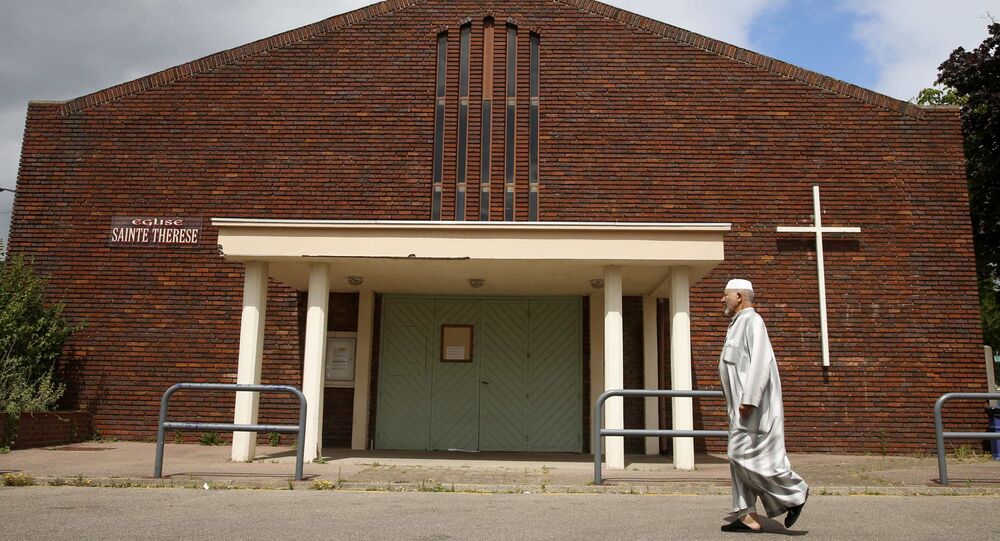 © AP Photo / Francois Mori
Austria in Touch With Religious Communities on Security After Normandy Attack
MOSCOW(Sputnik) — Inter-faith dialogue and unity among various churches across Europe is needed to overcome Islamophobia that is likely to rise after an attack on a church in the French region of Normandy, Erin Green, spokeswoman for Conference of European Churches (CEC), Europe's Christian churches union, told Sputnik Wednesday.

On Tuesday, two armed men took five people hostage at the Saint-Etienne-du-Rouvray church in Normandy. The attackers were later killed, while at least one hostage was murdered and three people were wounded, one severely. Soon after the incident, French media reported that one of the attackers tried to go to Syria via Turkey in 2015 but was detained and extradited to France, where he was put in prison.

"What we can do is to do more in the area of peaceful reconciliation and in the area of inter-faith dialogue. Because what you often see immediately after these attacks is a really impulsive increase in Islamophobia and xenophobia," Green said.

© REUTERS / Pascal Rossignol
US Stands Ready to Assist France in Investigation of Normandy Church Attack
She added that CEC "would encourage the support from the European community as a whole in order to create an opportunity for all people of good will to feel included and safe."

According to Green, the Normandy attack deeply affected all Christians and clergy of various churches.

"When these things happen, it’s an attack against all people of good will, all people of faith and all Europeans. Because certainly it is not only Catholics who will be affected by that. It will be every clergy person who works in every church… This touches all Christians quiet deeply," she stated.

French President Francois Hollande said following the attack that killing the priest and attacking the Church means to "defile the Republic."

The Islamic State terrorist group, which is outlawed in many countries, including Russia and the United States, claimed responsibility for the Normandy attack.