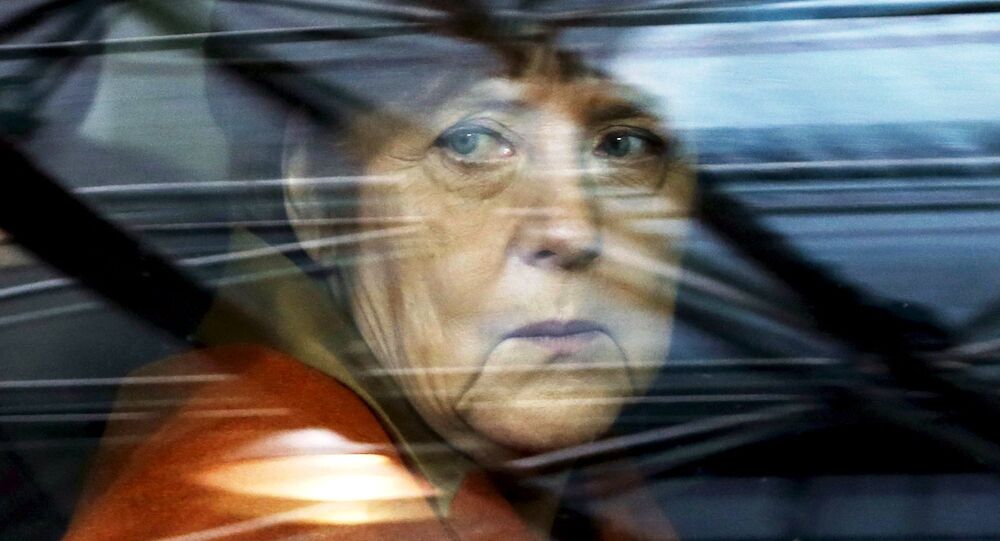 Following the recent wave of deadly attacks in Germany, German and foreign media speculate whether it could cost Chancellor Merkel her next term and her Christian Democratic Union (CDU) control of the country's parliament.

© REUTERS / Michael Dalder
Destabilization of Europe is ‘of Benefit to US, Turkey’
A number of German and foreign media sources have analyzed the political situation in Germany following the wave of recent deadly attacks in the country.

“Reutlingen, Ansbach and Wuerzburg were all refugee crimes,” Fabian von der Mark wrote in an article for the Deutsche Welle news website.

“The government rightly underscores the fact that the major terrorist attacks in Europe were all carried out by homegrown extremists, but now three shockingly violent crimes were committed by people who have come from Afghanistan and Syria in the past two years and had been warmly received in Germany.”

“The target of political attacks is the so-called 'welcome culture,' which Merkel stands for like no other,” he states.

“The public sees 'Merkel' and 'refugees' as linked. Now that refugees are making negative headlines once again, pressure on Merkel is on the rise,” reads a separate piece by Kay-Alexander Scholz.

The reporter then provides his analysis of what it could possibly mean for the Chancellor and her party in future.

“Germans go to the polls in national elections about a year from now. Merkel hasn't said whether she plans to run for another term in office. Her decision is likely to depend strongly on how the refugee situation unfolds. A major terrorist attack like those in Paris and Brussels would make a fourth term less likely,” he suggests.

The AfD has been a very strong critic of Angela Merkel’s “open borders’ policy, the outlet says.

What makes the situation worse is that the Chancellor herself is currently on holiday in eastern Germany, in the Uckermark region where she grew up.

The hashtag #Merkelsommer, or Merkel summer, has been trending since early Monday on Twitter, with users slamming the chancellor’s open-arms refugee policy and lambasting the country's migrants.

​“Where the AfD is concerned, things could get interesting this September. In state elections in Mecklenburg-Western Pomerania, Merkel's home state, the AfD could conceivably emerge as the strongest party. At this point, the CDU is still well ahead, but should there be more killing sprees or terrorist attacks, the distance could quickly decrease,” DW therefore suggests.

​Meanwhile, a recent poll conducted by Pew Research Center, the US-based think tank, revealed that “the refugee crisis and the threat of terrorism are very much related to one another in the minds of many Europeans. In eight of the 10 European nations surveyed, half or more believe incoming refugees increase the likelihood of terrorism in their country.”

Anatol Lieven, director of Research on Terrorism and International Relations at King’s College, London, believes that “the way things are going, Merkel is not going to last as the Chancellor of Germany for very much longer. Clearly, her decision over the refugees was extremely unpopular, and all of these events are making it still more unpopular.”

“What is going to happen soon is a much more radical, right-wing CDU in Germany, perhaps allied with Pegida and other new right-wing forces. At that point you’ll see Germany moving more in the direction of France. The first attack was not a terrorist attack, and the second one most likely was, but the German public will see both as terrorist attacks and react accordingly,” he told the Valdai Discussion Club.