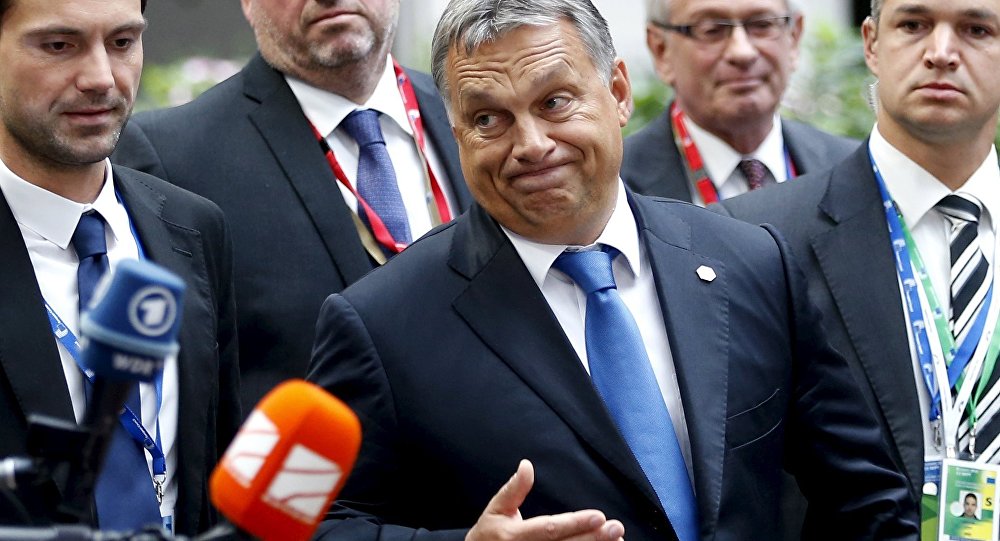 Hungary’s right-wing prime minister, Viktor Orban, who has taken a bold stand against unchecked migration, has claimed that he shares US Republican presidential nominee Donald Trump’s views on foreign affairs, remarking that the real-estate mogul’s approach would be beneficial for Europe.

"The migration and foreign policy, advocated by the Republican candidate Mr. Trump,” he said, “is good for Europe and vital for Hungary."

© REUTERS / David Becker/Nancy Wiechec
Race to the White House: Trump Wipes Out Clinton’s Lead
The Hungarian leader has become the first European politician to publicly articulate a preference for the Republican candidate over the Democratic one in the ongoing presidential race in the United States.

This is not the first time the Hungarian politician has spoken well of the US real-estate-speculator-turned-politician, calling him an “upstanding American presidential candidate.” In particular, Orban opined that Trump is the only one who knows how to fight terrorism in the Old World, adding, “I, myself, could not have drawn up better what Europe needs.”

Speaking about the Democratic platform and its candidate, Hillary Clinton, he criticized her party’s migration policies and what he termed its practice of "democracy export," which, he said, is “deadly for Hungary." Indeed, Orban has defied Brussels while gathering support elsewhere in Europe by erecting a fence along the country's southern border, which stretches from the Slovenian border to the Romanian border along the country's borders with Croatia and Serbia.

Clinton, who has won the Democratic nomination for the presidency, visited Hungary in 2011 as US Secretary of State. At the time she noted that Hungary suffered from a corrupt judicial system and a lack of free press.

Trump's approach to immigration is similar to Hungary's; he's called for the construction of a wall on the US border with Mexico, as well as a ban on Muslims from entering the country.

Both politicians have been criticized in the US and Europe for their open support of Russian President Vladimir Putin.

Most political analysts suggest, however, that their like-minded political sympathies are not evidence of collusion, but reflect commonly-held views which contradict those of Brussels.

"I don't think Putin is behind the budding relationship between Trump and Orban, but both are interested in improving Russian ties, so theirs is an alliance of interests," Political Capital analyst Peter Kreko said.