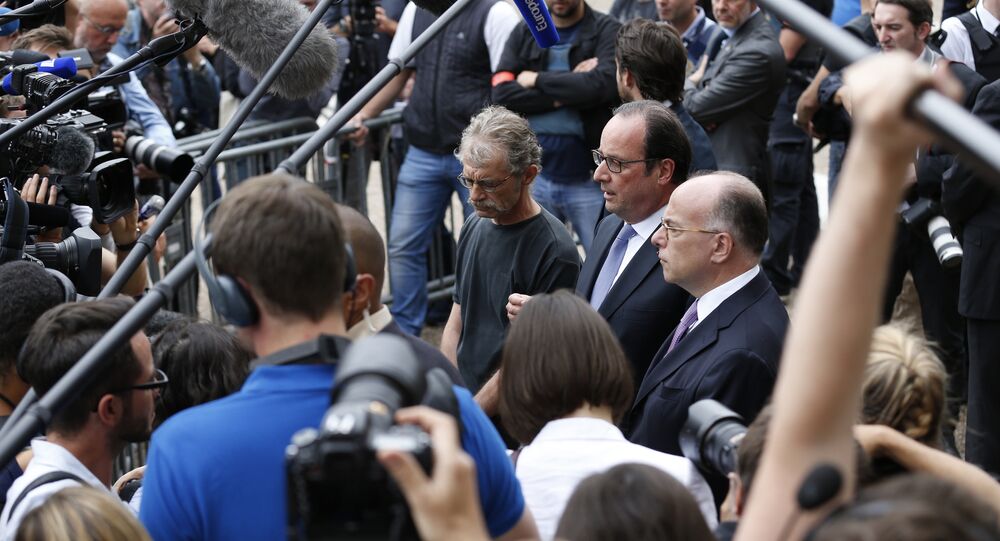 French President Francois Hollande rushed to the scene of the latest terror alert after two assailants were killed by police after taking hostages - including a priest and nuns - at a church in northern France.

A police source said that one of the hostages — an 84-year-old priest —had been killed with a blade in the attack which took place in the Normandy town of Saint-Etienne-du-Rouvray, south of Rouen. Police say both hostage-takers were killed.

Evil attacks the weakest, denies truth & love, is defeated through Jesus Christ. Pray for France, for victims, for their communities.

​Meanwhile, Hollande is facing growing pressure over alleged security failures that led to 84 people being killed in Nice, July 14, when Mohamed Lahouaiej Bouhlel ploughed a 19-ton truck into a crown gathered on the city's Promenade des Anglais.

The French president is under pressure to explain a series of security failures in Nice, with a local policewoman alleging that the interior ministry had harassed her into reporting that the national police had been deployed alongside local police in Nice on the night of the lorry attack.

Interior minister Bernard Cazeneuve, however, denied the allegation while Prime Minister Manuel Valls described the scandal as a "political polemic aimed at destabilizing the government." Valls was booed at a memorial service for the victims of the Nice attack.

There had been criticism that the national police were not actually deployed and that only a small force of local police were protecting the entrance to the pedestrianized zone, allowing the driver to plow straight into the crowd.

The driver of the 19-ton truck plowed into crowds along the promenade in Nice, despite heavy vehicles being banned on public holidays in France and those over 3.5 tons being barred from the promenade all year round.

© AFP 2020 / BORIS HORVAT
A man kneels and holds his head on July 15, 2016 in front of flowers placed near the site in Nice where a gunman smashed a truck into a crowd of revellers celebrating Bastille Day, killing at least 84 people.

The latest attack will pile pressure on Hollande, Valls and Cazeneuve to increase security on the streets of France and promote greater cooperation between its municipal and national police, as well as the security services.

Outside of the police, France has seven different intelligence agencies:  the DGSE [General Directorate for External Security] and the DGSI [General Directorate for Internal Security], as well as another five agencies that work in various technical and specialist fields. The separate organizations work in silos, meaning that intelligence on potential attackers is often not passed on.