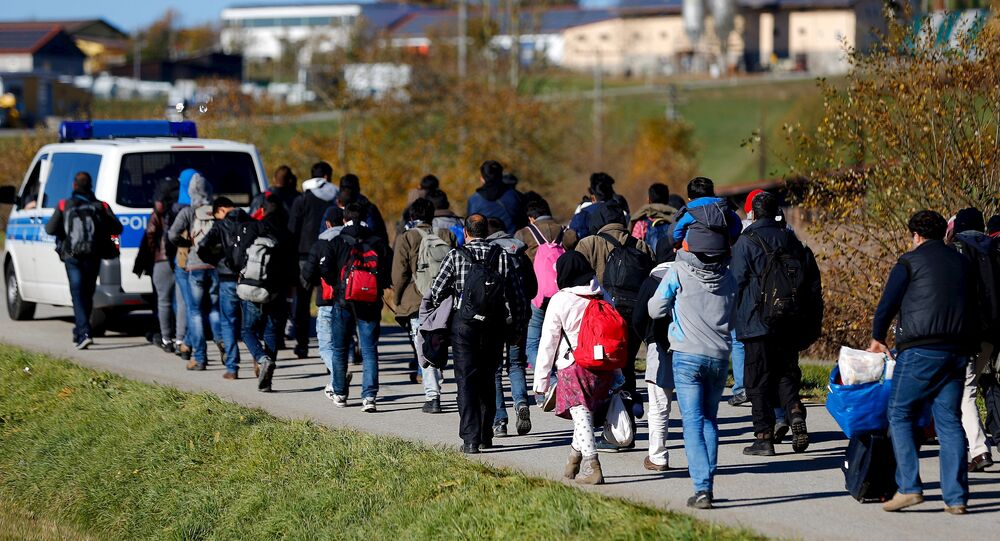 A poor level of integration is one of the main reasons behind the terrorist attacks that took place across Europe over the last few months, InoSmi.ru journalist Dmitry Dobrov wrote for RIA Novosti.

© REUTERS / Michaela Rehle
German Integration Bill to Prevent Migrants From 'Forming Ghettos'
For instance, the perpetrator of the recent attack in Munich was classified as a mentally unstable teenager who was born in a family of Muslim immigrants and felt himself as an outcast among German youth.

It turned out that the deadly Munich shooting, which claimed the lives of 10 people and left over 30 injured, was initiated by 18-year-old German citizen of Iranian origin Ali Sonboli.

"Classmates mocked Ali, because they thought he poses himself as a German, being a Persian. It is noteworthy that most of all he was teased by the Arabs and the Turks. As a result, he was unable to clearly define his identity and became insane," Dobrov wrote.

According to the journalist, the integration of representatives of the traditional Middle Eastern and African societies is very complicated, mainly because they live in a closed circle of their family and neighbors, keeping the customs and traditions of their historical homeland.

German newspaper Die Welt also added that the integration of Muslims is complicated not only in Germany, but also in other European countries.

"Muslims more often than other immigrants live among themselves. They gather in certain districts where then the ghettos are formed," Die Welt noted.

© REUTERS / Marko Djurica
Dutch Deputy PM Says 'Fewer Than Half' of Migrants Pass Integration Test
According to Dobrov, Muslims are especially sensitive to the modern European values ranging from the emancipation of women to gay culture and thus are willing to protest them and "punish" a decadent society.

"Perpetrators who commit punitive actions, are confident that they are not criminals, but fighters for justice. Therefore, it does not matter who they are — terrorists, maniacs or urban guerrillas. The main thing — they want to blow up the system from within," the journalist claimed.

There is a growing concern that the migrant crisis has left Germany open to attacks. More than a million migrants arrived in Germany in 2015, especially after German Chancellor Angela Merkel said her country's doors were open to Syrian refugees.

"We need a reformed Islam, so that Islam could belong to Germany," the Internet user under the nickname AUSSTEHEND-ENTFERNT wrote, commented on Die Welt newspaper's publication.

"In my perception Islam of in any form doesn't belong to us — not to Germany or Europe, because it is based on the Christian culture," posted another under nickname Bert.

A person under the nickname nomad wrote: "A decisive point would be the progressive introduction of training for imams in Germany, who could further spread linguistic and social skills. Unfortunately we failed to do it in the past. And of course, one can't do it now in the short run."