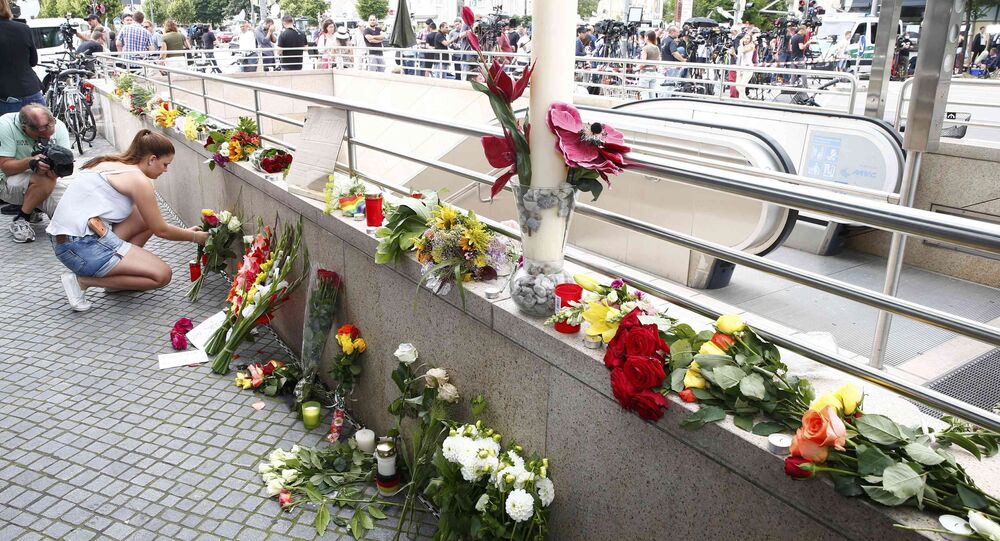 A day after the shooting in Munich Olympia Shopping Mall, which left nine people dead and over 30 injured, Sputnik's correspondent visited the scene and spoke with the city's residents who laid flowers to commemorate the victims of the deadly attack.

"I am shocked and have nothing to say," a local resident said.

On Friday evening, the woman was informed by her friends that she shouldn't go out because of the shooting that took place in the center of the city.

"And I really planned to go there with my little one," the woman said, adding that she got really scared when she heard the news. "Windows and doors are all closed. I was glad that my husband was at home," she added.

On Friday, the 18-year-old German-Iranian man opened fire in a crowded Munich shopping mall and a nearby McDonald's, killing nine and injuring over 30 others before committing suicide. The attack caused panic across the country as many people have repeatedly expressed their security concerns, especially amid the growing influx of migrants to Germany.

"Our kids spend their time here every day. They come here to eat ice cream or buy something," a local man told Sputnik. He was on his way home from work when he heard about the shooting. "Until today, I was still convinced that I live in a safe place. That shocked me," he said.

© REUTERS / Vincent Kessler
Hollande, Merkel Discuss 'Despicable Acts' Carried Out in Nice, Munich – Paris
German police believes that there was no political motive behind the Munich mall shooting, while it has been confirmed that the suspect was under psychiatric supervision, Munich Prosecutor's Office spokesman Thomas Steinkraus-Koch said Sunday. According to the spokesman, the attacker had spent two months in a hospital in 2015, after which he had been on outpatient check-up. He added that the attacker had been both on stationary and outpatient check-up with regard to his illness.

However, this explanation of the crime doesn't seem to be sufficient for the local residents. They demand more action from the German authorities to prevent similar attacks in the future.

"This is our home, our neighborhood, we come here every day," said another local resident and burst into tears. "We are very afraid for our children, because we can't protect them against such things."