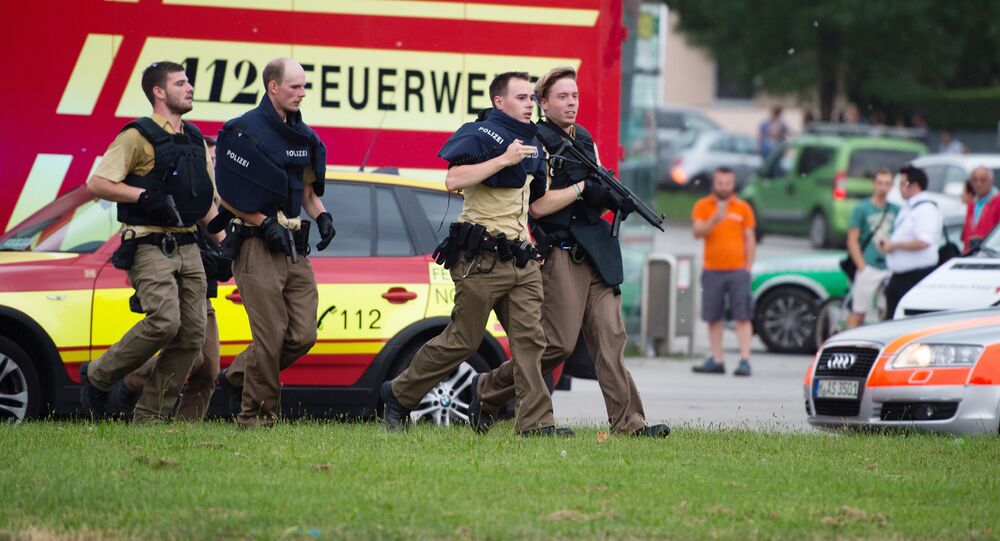 At least 10 people have been killed in a mall shooting in the city of Munich, Germany.

The shooting began at a McDonalds before the suspects continued across the street to the Olympia-Einkaufszentrum shopping mall in the Moosach district of Munich, Germany. Police have confirmed at least 10 deaths and at least 20 people are injured.

Authorities have determined with high probability that the shooter killed himself and acted alone. A red backpack, similar to one worn by McDonald's shooter, was found on a body roughly 1 km from the scene of the shooting. Earlier reports indicated that there were three gunman, but authorities appear to be dismissing that claim.

The shooter has been identified as being 18 years old, and a German citizen of Iranian origin. While a motive is not known at this time, police say there is no apparent link between the shooting and Islamic terrorism. He used a pistol, despite earlier reports of long rifles.

A spokesman for the Munich Police claims that at least 100 people witnessed the incident. Authorities have urged anyone with photos or videos from the scene to send them to the police.

There were also unconfirmed reports of shooting at a second location, those these have been deemed false by police. German TV channel ARD reported that the city's main train station was evacuated. The public transport agency announced that all subways, buses, and trams in the city were suspended, but have since been reopened.

A state of emergency has been declared in Munich, with special operations underway. The anti-terror special unit of the federal police has been deployed to the city. Border patrol helicopters have also been rerouted to join in the manhunt.

"The cabinet ministers concerned are on their way to Berlin," Merkel's chief of staff Peter Altmaier said.

German police warned residents to remain in doors as they conducted a citywide manhunt. According to Bavarian broadcaster BR, police also asked people to avoid highways near the city.

Police conducted a major operation near the shopping center.

Police were notified of the events at 15:52 GMT.

Earlier, police at Olympia Park Station in Munich told Sputnik they did not have any information on the victims.

"We are receiving calls confirming that there were shooting in the shopping mall but we don’t have information on victims," the police said.

"There are several shooters, it is not just one person. Shooting is still going on outside, but not inside the mall, they are gone, we are searching for them," Olympia Park Station police said.

As an act of precaution, the Tollwood Music Festival has been cancelled.

The attack occurs as German Interior Minister Thomas de Maiziere is on holiday in the United States. He has not yet commented on the incident.

Residents are tweeting #offenetur, German for "open door," for anyone seeking shelter. Facebook has activated its Safety Check feature. Flags will fly at half-mast in Bavaria on Saturday.

Germany authorities have been on high alert since the axe attack onboard a train in Bavaria on Monday.

The subway in diraction to #Munichs shoping mall #OEZ is not working because because of the #shots. pic.twitter.com/Mh5H2ioakt