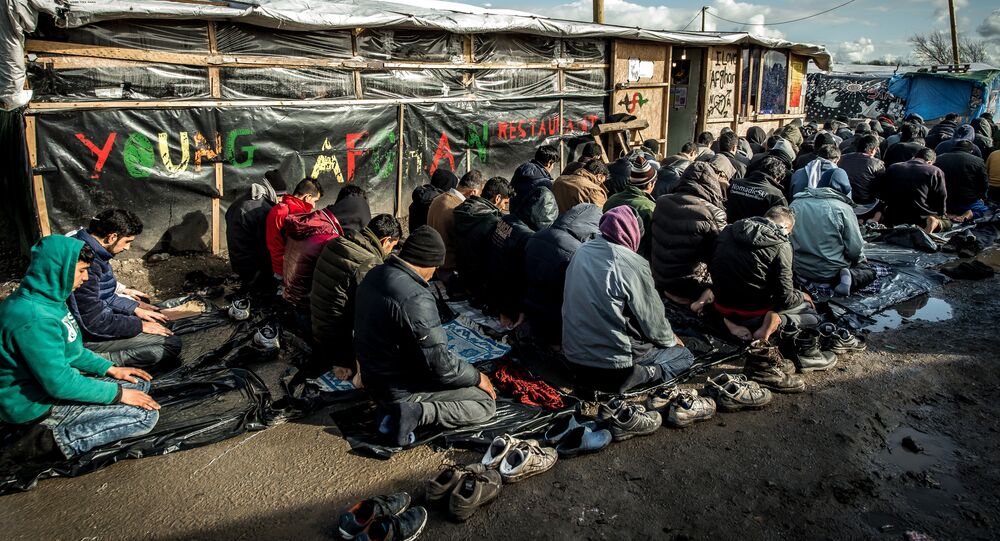 Francois Guennoc, the vice president of local charity L’Auberge des Migrants said that the population of a refugee camp in the French town of Calais increases by about a thousand people per month and it is expected to be 10,000 people in September.

© AFP 2020 / Philippe Huguen
May and Hollande Agree Calais Border Controls to Remain After Brexit
MOSCOW (Sputnik) — The number of migrants living in a refugee camp in the French town of Calais is expected to rise to 10,000 by September, the vice president of local charity L’Auberge des Migrants told Sputnik on Friday.

"About 50 to 70 people arrive daily, most after coming through the Mediterranean and Italy. In total, the camp population increases by about a thousand people per month. It is expected [there will be] 10,000 people in September," Francois Guennoc warned.

In Guennoc's words, the camp mainly consists of people aspiring to go to Britain. Other people come to Calais in order to claim asylum here as "the acceptance rate is a bit higher for 'Calaisiens' and processing time is shorter" there if compared to the same procedure in other regions of France

© AP Photo / Emilio Morenatti
Calais Mayor Urges to Reconsider Border Deal Between France, Britain
The Calais authorities intend to bulldoze what is left of the makeshift camp, after half of it was already dismantled in March. Now, according to the estimations of L’Auberge des Migrants, the camp hosts more than 7,300 people.

The camp, called "Jungle," is known for its squalid conditions, numerous attempts of its inhabitants to break into the Channel Tunnel in a desperate bid to reach the United Kingdom and multiple police raids. On Thursday, some 150 police officers raided the camp arresting 13 people for illegal trade.

"For now, we ask for better living conditions in Calais, stopping police violence and making obstacles to the work of associations that help refugees, stopping arbitrary arrests and detentions, and taking load of unaccompanied minors, numbering more than 500, and the schooling of children under 16 years, according to the law," Guennoc said.

© Sputnik / Viktoria Ivanova
Some 5,000 Refugees Still Living in Calais 'Jungle' Camp - MSF
Calais Mayor Natacha Bouchart repeatedly said she was hoping the migrants would leave the town as soon as possible and called for abandoning an agreement allowing UK border guards to check passports in Calais thus leaving migrants few chances to get to the British soil.

Those calls were echoed by many French politicians, including Economy Minister Emmanuel Macron, who suggested that following Brexit the deal between Paris and London, that allows to conduct border checks on the French side of the Channel, must be called into question.

On Thursday, UK Prime Minister Theresa May after talks with French President Francois Hollande said that Paris wanted the unique border agreement between the two sides to stay in place despite Brexit.

May and Hollande Agree Calais Border Controls to Remain After Brexit