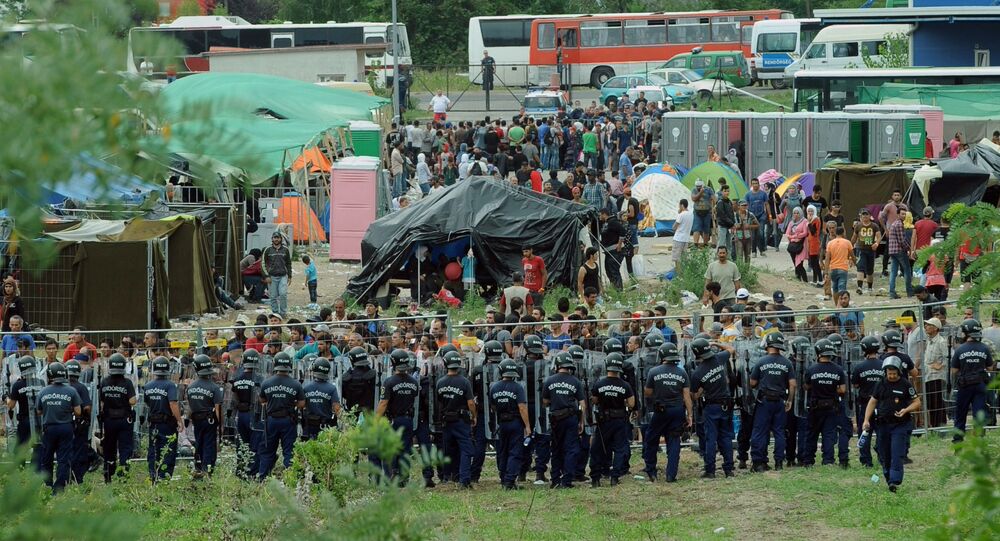 Billionaire George Soros is concerned about the situation in Turkey following Friday's failed coup attempt. Warning that Ankara could soon be moving closer to Moscow, the billionaire suggested that Ukraine may now be the EU's last line of defense against an array of threats.

Interviewed by the Italian daily Corriere della Sera, Soros, the billionaire philanthropist known in Eastern Europe for financing color revolutions, warned that the present waning of the migration crisis in Europe is temporary, and that the continent cannot hope to preserve the current situation indefinitely.

© AP Photo / Jacques Brinon
French Police Evacuate Over 1,500 Migrants From Paris Refugee Camp
The business magnate emphasized that the number of migrants from Muslim countries is set to rise, and that the ratio of migrants to Europeans will worsen accordingly. He noted that Europe's ongoing migration crisis is one of the reasons the European Union is in "mortal danger," and that this problem must be resolved as quickly as possible.

The failed coup attempt in Turkey also increases the level of uncertainty, according to Soros, and could affect Ankara's agreement with Brussels on keeping migrants out of Europe. In any case, Soros doesn't believe that the EU should build its refugee policy on the basis of this agreement.

"One thing is clear," Soros said. "Turkey's President Recep Tayyip Erdogan is now seeking some kind of reconciliation with Russia and Vladimir Putin. I do not know what his motives are. Perhaps he wants Turkey to become a balancing factor in relations between Russia and Europe. In any case, the agreement between the EU and Turkey is a very weak foundation on which to build the EU's refugee policy."

At the same time, commenting on the possible solutions to the threats facing the EU project, Soros reiterated that one of the countries that could help rescue the bloc is Ukraine. "The EU must defend itself from external enemies and recognize that Ukraine is the most important resource at its disposal for ensuring its security."

© CC0
Soros Issues Dire Promise: 'Brexit to Turn Into Regrexit'
Russian commentators didn't know quite what to make of Soros' remarks, except to say that what the billionaire was implying was using Ukraine as a pawn, perhaps all the way up to turning the country into a giant dumping ground for Middle Eastern refugees in Turkey's place. That country presently holds about 2.6 million refugees from Syria.

Svetlana Gomzikova, a columnist for Russia's Svobodnaya Pressa online newspaper, recalled that this wasn't the first time that Ukraine has been presented as Europe's 'last line of defense' from external threats.

"Generally, if Europe has no one else to defend it against Europe, it's not really in an enviable position," the journalist wrote. At the same time, she added, "Soros' commentary repeats almost word for word the declarations of Ukrainian politicians when they travel to the West to ask for money."

In late May, at a ceremony where the EU flag was raised over Ukraine's Presidential Administration, President Poroshenko declared that "today it is us, Ukrainians, who are defending Europe from barbarism, defending it against the tyranny, terrorism, aggression, and militarism which hangs over our continent."

"Soros," Gomzikova suggested, "likely understands the 'threat' to Europe to consist of migrants from the Middle East and North Africa. But how Ukraine will be able to save the Europeans from this phenomenon is completely incomprehensible."

© Photo : Pixabay
Swedish Bus Driver Beats Up Syrian Refugee in Shocking Attack (VIDEO)
Asked to comment on Soros' pseudo-proposal, political commentator Armen Gasparyan told the online newspaper that in a situation where Ukraine is overrun by armed ultranationalist volunteer battalions, many of them now officially integrated into the country's security services, it's unlikely that these forces will simply accept the idea of placing hundreds of thousands of non-European refugees in their country.

As for Soros' comments, Gasparyan suggested that the billionaire is simply protecting his business assets. "He has invested huge sums in Ukraine through his various [civil society] funds, going back all the way to the early 1990s. And the events of 2014 were a golden period for Soros – his Klondike."

"How can Soros protect his assets? Only through promotion. Because there is nothing else for Ukraine to offer Europe today; its industry is destroyed, the country is in a dire economic and political situation, and continues to be in a state of war…What's left? What's left, forgive me for being rude, is to create a reservation."

Still, Gasparyan noted, if that is what Soros was implying with his commentary, it's unlikely that his plan will succeed. "Because when Ukraine's population finds out that someone intends to move half a million Arabs into their country, it will result in an immediate social explosion. Integrating even ten people into a society with very different beliefs, a different religion, a different weltanschauung, is incredibly difficult. And here we're talking about hundreds of thousands of people."

Ultimately, the commentator recalled, Soros' main goal through all his initiatives is to preserve and grow his capital. "What happens in Ukraine – in Poltava, Sumy, or Kherson, is not his concern. He's not going to live there in twenty years, or have to sort through the ethnic clashes which would be guaranteed to take place there" if his plans materialized.

In any case, Gasparyan noted, European officials are unlikely to agree to such plans anyway. "Europe is already exhausted by Ukraine," and will not be willing to finance refugees' presence on Ukrainian territory. "If the EU has no money for Italy, Portugal, Greece and others, where is it going to find money for Ukraine?" the commentator concluded.

Coup Attempts & Sultanates: EU in Disarray Over What to Do Next in Turkey