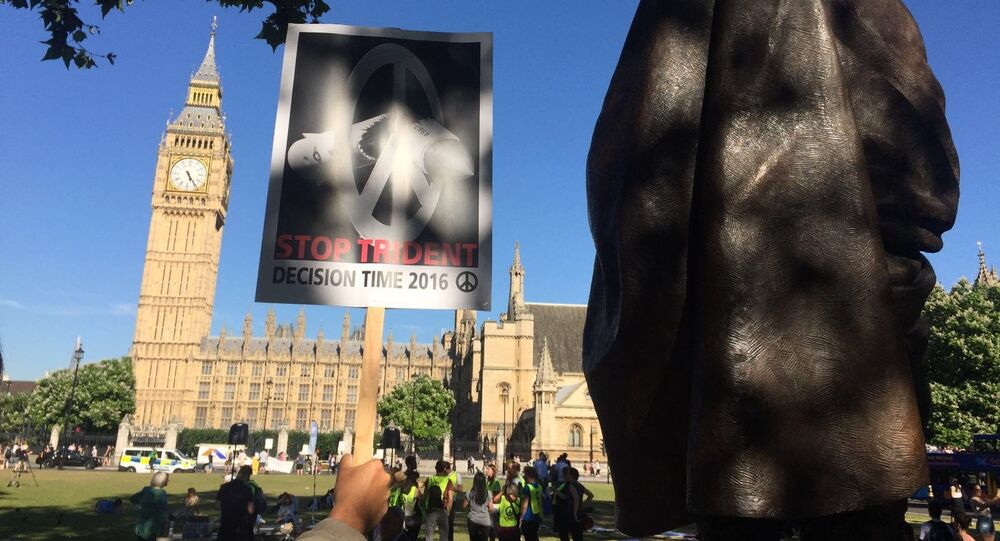 Trident is About 'Boys Demonstrating How Boyish They Are' - UK Activists

The changing mood towards nuclear weapons was demonstrated in London at a protest that shows people will not stay silent, despite MPs voting in favor of keeping UK's Trident nuclear weapons system.

The Trident vote went the way most people expected, by a majority of 355 parliament voting in favor of a Trident renewal. It was a motion backed by almost the entire Conservative party and more than half of the Labour patyuy's MPs.

MPs vote 472 to 117 to approve the motion on the UK's nuclear deterrent #Trident pic.twitter.com/br2RKRCRGX

​At the same time, Theresa May said that she would be happy to authorize a nuclear strike that could kill 100,000 people.

The cost of replacing #Trident has almost tripled since 2009. Let's #StopTrident — join us https://t.co/C7PdHHmBdE pic.twitter.com/QfYkIzWQbJ

​Monday (July 18), Britain's new Prime Minister confirmed she would press the button if necessary, as she opened a debate on whether the UK should spend around US$53 billion (£40bn) on replacing four submarines that carry nuclear warheads.

Theresa May says it's 'sheer madness' to give up #Trident. Here's what we think. Retweet if you agree. #StopTrident pic.twitter.com/SAULq7VcEl

Trident renewal was opposed by all Scottish National Party (SNP) MPs, the Lib Dems, as well as Labour leader Jeremy Corbyn, who spoke out against the plans during the debate in the House of Commons on July 18. He was joined by 47 other Labour MPs who joined him by voting against Trident.

Shadow defense secretary, Clive Lewis and the shadow foreign affairs secretary, Emily Thornberry abstained from the vote as they believed the government had turned an issue of national security into a political game.

What do CND members think about #Trident? We spoke to Shadow Chancellor @johnmcdonnellMP #StopTrident pic.twitter.com/g36DJeWkjG

​This however, didn't stop leadership challengers, Angela Eagle and Owen Smith voting in favor of renewing Trident. 41 Labor MPs were absent or decided to abstain.

Full list of Labour MPs who abstained or were absent in Trident vote pic.twitter.com/39OLZCCKPP

​Before the vote hundreds took to the streets outside Parliament to protest against what they saw as a blatant waste of money, especially when the NHS was in desperate need of a financial boost. Crowds gathered by Parliament Square, in London on the same day and chanted their discontent at the fact Trident was not necessary and that it would cause the deaths of millions of innocent people if ever used.

Headed by Campaign for Nuclear Disarmament (CND) leader, Kate Hudson, the protesters discussed why a Trident renewal would only lead to further war and destruction.

They were joined by Diane Abbott MP, who said that she had decided what her position was and would be voting against Trident.

"Nobody really believes that the Trident nuclear weapons system would protect us from threat that we face today," Diane Abbott said at the protest meeting.

‘UK needs to have nuclear weapons because it is a world power’ #TridentVote https://t.co/pWrEyKBlbz pic.twitter.com/YPbQj6Tb6r

"There's a phrase I would like to use about it but I won't, but it's just the boys demonstrating how boyish they are," Abbott added.

Abbott's comments were echoed by others, including Russell Whiting, the Parliamentary officer at the CND. Whiting said that Trident was costing way too much money and would not keep Britain safe from 21st century threats such as climate change.

"…What you see in Parliament Square now is that the mood on Trident is changing. We will stay here and keep campaigning. We will continue to talk to our MPs and push the governments to engage in international treaties in order to save the lives of millions," Whiting told Sputnik.