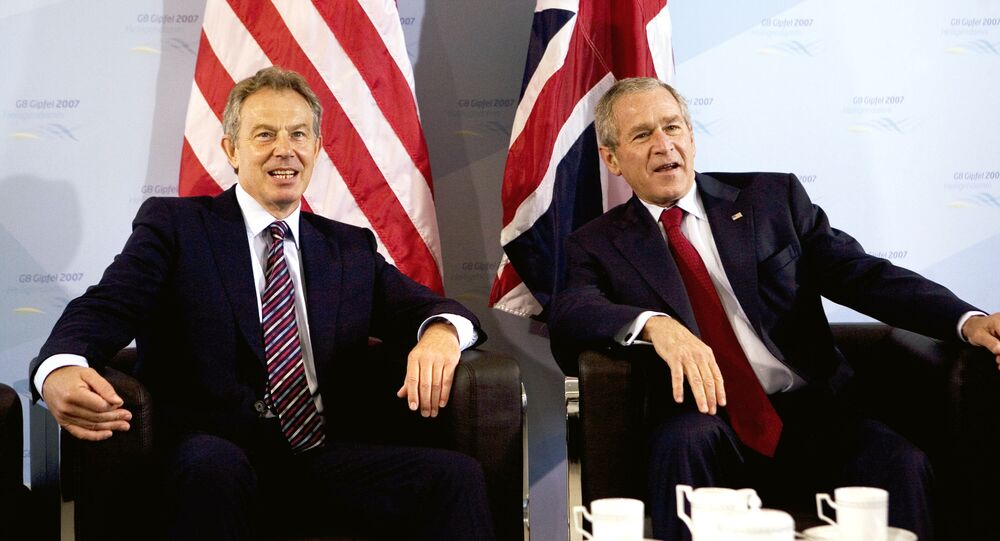 A report released in London earlier this month concluded that the 2003 decision by the US and Britain to invade Iraq was based on flawed intelligence data and assessments as Saddam Husseim posed no threat and did not possess any weapons of mass destruction.

© AFP 2020 / Dan Kitwood / POOL
Chilcot Report Reveals US, UK Invade Nations in Old Colonial Way - Ex-US Army Officer
The Chilcot report also said that the war Britain and the US waged against Saddam Hussein was unlawful and that chances of a peaceful resolution of the conflict existed even the moment the invasion began.

The report raised even more important questions, namely why were then US President George W. Bush and then UK Prime Minister Tony Blair so eager to attack Iraq? Was the so-called “Arab Spring” part of that very same geopolitical plan? Was Daesh born out of the 2003 invasion of Iraq, and did the US and Britain have a hand in the series of deadly terrorists attacks in Paris, Brussels and now in Nice?

In an interview with Sputnik, Serbian political analyst Alexandar Pavic described the 2003 invasion of Iraq and the 1999 NATO bombings of Yugoslavia as crimes against peace.

“Maybe after Chilcot’s report they will put Blair on trial, but this is essentially a case of “Western democracies” committing a crime against peace. And will Iran now be able to bring Britain and the US before an international court?” Pavic wondered.

The Chilcot report also raised the question of why the Americans and their British allies were so eager to make war on Iraq resorting to outright lies and violations of international law to make that invasion happening.

“During a 1999 meeting with the Pentagon’s then number three man, Paul Wolfowitz, General Wesley Clark said that after the 1991 Gulf War First Iraq War Wolfowitz told him that America had proved its ability to use military force in the region and that there was nothing the Soviet Union could do to stop that. He said that ‘we have 5 to 10 years to wipe out all this Soviet clientele – Syria, Iraq and Iran – before another superpower comes along.’” Alexandar Pavic continued.

He added that after the 9/11 attacks a senior US military officer told Clark that “within the next five years we are going to get rid of the government of seven countries. We’ll start with Iraq and Syria, Lebanon, Libya, Somalia, Sudan and Iran will follow suit.”

Dragomir Adnjelkovic, another Serbian political scientist, joined in saying that back in the 1990s The New York Times had learned about the Pentagon’s plans to control sources of oil and gas.

“Hence their move to the oil-rich Middle East and North Africa,” he said, adding that was exactly why the Americans needed to get rid of regimes which did not accommodate their interest and could someday join forces with America’s geopolitical enemies.

“Those were secular regimes that held the Islamic fundamentalists in check and knew how to prevent the spread of their ideas to Europe.  These regimes are gone now and we now have all these terrible things happening in the Old World,” Adnjelkovic emphasized.

He added that the West had opened Pandora’s Box, that what just happened in Nice will happen again. This process can’t be stopped even if the US and the EU agree to fight terrorism.  jointly with Russia.

“Without the big lie that sparked the war in Iraq and the West’s predilection for dealing with Radical Islamists there would have been no terrorist attacks in Europe,” Alexander Pavic joined in, mentioning the Western countries’ past cooperation with Islamists in Afghanistan, Bosnia-Herzegovina and now in Syria.