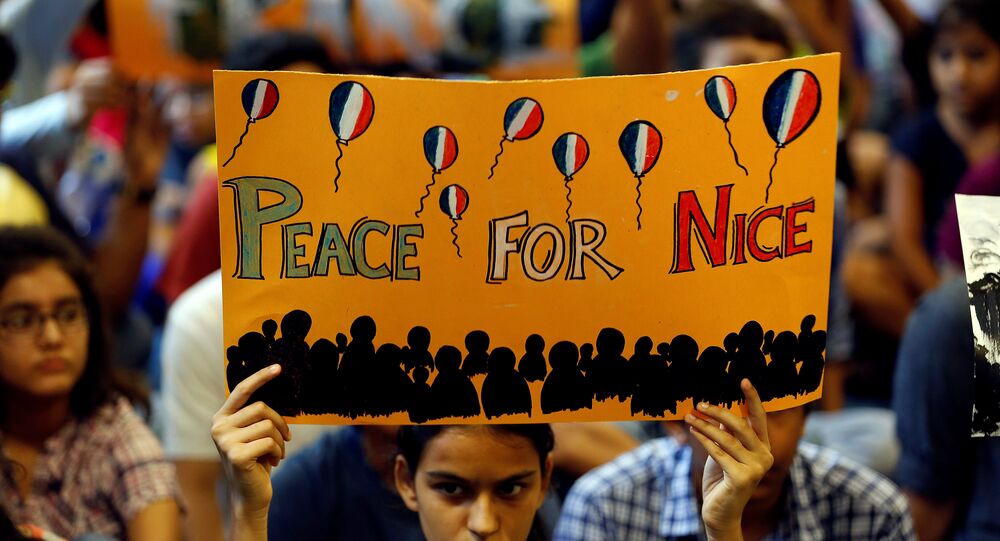 France is mourning for the victims of Nice truck attack. Hundreds of people have gathered at a memorial spot in Nice to honor the victims of a devastating terrorist attack that killed at least 84 people.

Grieving residents made their way to the area where the lorry rammed through celebrators, to lay down flowers in memory of the dead.

Sputnik spoke to some of the mourners, who came to pay respect to the victims of the Bastille Day attack.

“It’s a shame. They are not people who are doing this. I do not want to talk bad about what I want us to do, because I believe in God,” one elderly man said in grieve stricken mood.

© AFP 2020 / Valery HACHE
Nice Assailant Carefully Planned Carnage, Sent $110,000 to Family in Tunisia Before Attack
He further said that this is a complete scandal for the French government and it should not have happened.

“We are not on the right track and our president is worthless. He does not deserve to be president.”

The man further said that he doesn’t think it was just a matter of safety, according to him the government did not take proper precautions. The threat has been there for a long time.

“Daesh has threatened us more than once, but now they are saying that it was a mentally ill person driving this truck?”

Another person spoke to Sputnik saying that everyone must pray for peace, for all those families and children who have died.

“I want to say, all these people who kill other people, we know who they are, they must be watched constantly. We cannot let them kill children, whole families, this is outrageous!”

Others expressed shock over how a man who has children himself could kill so many innocent children and people. A woman close to tears expressed her shock by saying that, “I think it's just terrible. There are no appropriate words. There is nothing more dreadful, and painful.”

Another woman said that she is feeling very emotional due to the attack. She said that she has lived in Nice for 40 years and she will continue to do so no matter what.

“I came this morning, did not find the flowers but flowers are an important symbol. The Market far from my home has been closed for two days. But I brought a stuffed toy in the memory of the dead children. Then there are those children who have not found their parents, they are in Pasteur hospital and they are waiting for their parents.”

She spoke about how everyone must show support and solidarity with the victims and their families now.

© REUTERS / Christophe Petit Tesson/Pool
Perpetrator of Attack on Nice Quickly Radicalized by Daesh - French PM
In conversation with Sputnik a young woman said that she feels fortunate to be alive because she saw the truck coming towards her but her husband pushed her and saved her life.

“We saw the truck coming and my husband pushed us so we did not get run down. We were here to celebrate, to spend time with our children and then we just saw a truck that was going to crush us and we did not even have time to hide.”

“We just thought about the children, people started to run, push each other, we turned around, wanted to help, but it was too late. I keep thinking of all those children whom I saw then… it's just crazy.”

She further shared her thoughts saying that she had been hearing very radical statements in the streets and have seen very unpleasant situations but people were not doing anything.

“I felt the change a couple of months ago. I called my mother and said I want to leave Nice, I feel that everything was getting worse.”

She further said, “Even yesterday there was no police presence. I mean on July 14th and I said to myself they are very relaxed. I should learn from them.”

She added that she thinks this is madness. People need to understand that rage is good, but now it is time to act.

“It's in the hands of the French. The French should get together and understand what can be done. I don’t think we will go wrong,” the woman said.