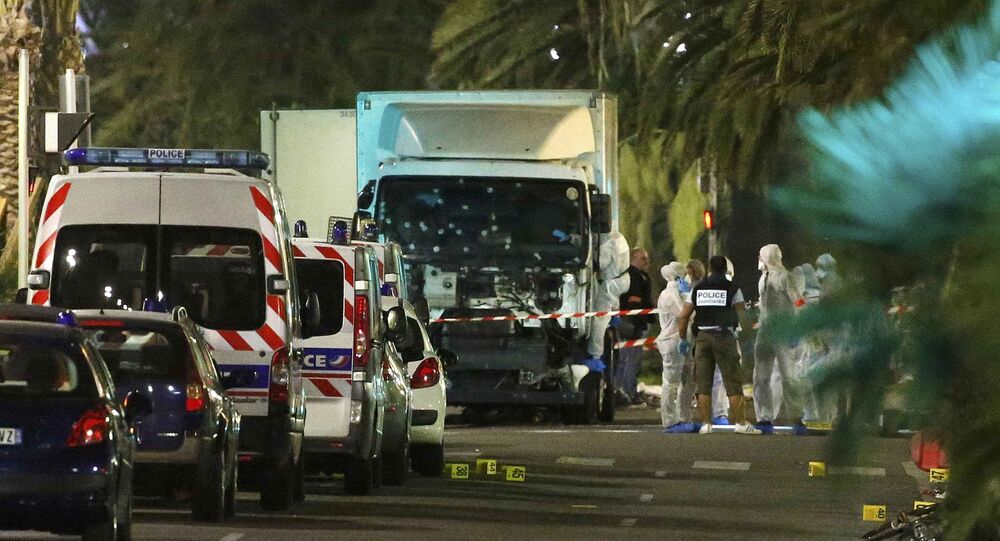 The radicalization of the terrorist, who was behind the deadly attack in the French city of Nice, occurred very quickly, which makes it extremely difficult to prevent attacks of this type, French Interior Minister Bernard Cazeneuve said Saturday.

© AFP 2021 / STEPHANE DE SAKUTIN
France Vows to Continue Fight Against Daesh Everywhere After Nice Attack
PARIS (Sputnik) — On Thursday night, a truck rammed into a large crowd that was celebrating Bastille Day in Nice. At least 84 people, including children, were killed and dozens of others were injured. The investigation found that the person behind the attack was 31-year-old resident of Nice of Tunisian origins Mohammed Lahouaiej Bouhlel.

"We are faced with a new type of attack. A person who committed it was in no way known to intelligence agencies — there were no signs of radicalization. It seems that he got radicalized very quickly," the minister said in reference to the testimonies by those in Bouhlel's environment, after an extraordinary Cabinet meeting headed by President Francois Hollande.

On Friday, Cazeneuve said that he was unable to confirm if the truck driver, who was behind the deadly attack in the French city of Nice, had links to radical Islam.

"The terrorists did not have any heavy weapon, he had only the gun. He was not involved in the fighting, he did not go to any special training. In such cases, it is very difficult to prevent the attack," Cazeneuve added.

Earlier in the day, the media reported that Daesh militant group claimed responsibility for a deadly terrorist attack in Nice.