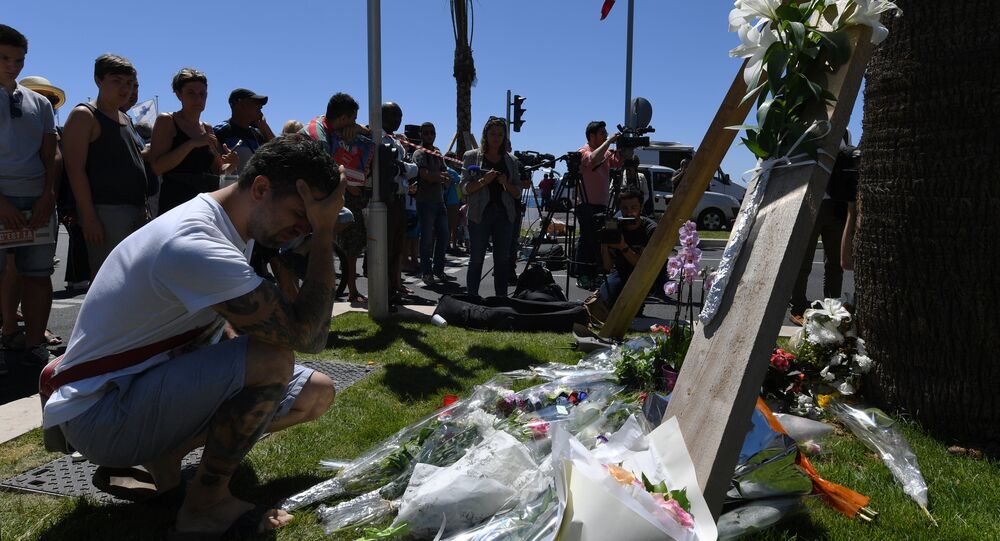 A witness in southern French city of Nice, who saw the attacker's truck roll past her a few feet away, told Sputnik it ripped right through the crowd at full speed, in what was clearly a cold-blooded murder.

MOSCOW (Sputnik) — At least 84 people died late Thursday when the heavy truck drove for more than a mile through a packed pedestrian zone in the French resort city. Thousands crowded on the famous Promenade des Anglais to admire Bastille Day fireworks on France’s national day.

Kira Kalinina, who was enjoying a family holiday in Nice, described to Sputnik the scenes of panic as the tragedy unfolded before her eyes.

"We pulled up the car at the traffic lights at the Boulevard Gambetta…when we heard people scream and run. And right at that moment a huge truck raced over them two meters away from us. I think it was going at 100-120km per hour, moving straight ahead like it meant to kill. It did not swerve," Kalinina said, adding the vehicle left a trail of dead bodies in its wake.

Alina Shabanova, who was vacationing in Nice, told RIA Novosti that the promenade was closed to traffic for the parade that took place earlier that day.

"As it went dark and the parade was over, the road stayed closed for strolls. That means the truck had broken through the cordons. Only there were no cordons in place – just light metal barriers," she said.

Shabanova and her husband were dining near a stage that was set up in the middle of the promenade. She said the attack happened minutes after the fireworks ended.

© Photo : Vangelis Antonakos
'It Could Have Been Us' - Newlyweds on Honeymoon Escape Nice Terror
"My husband had the road in sight, he saw the truck tear through the barriers and race on. It all happened in a split second. He yelled, ‘A truck!’ Everyone was soon on their feet and I saw a huge panicked mob coming at me."

Police shouted at people, telling them to evacuate and run for cover. Shabanova said they had holed up inside the restaurants. People who left their dear ones behind tried to get back in the street but were held in place.

Rita Davletova, a tour guide in Nice, told Sputnik she was with a French friend working for security authorities at the Nice administration, when the carnage began. She was told to hide in a casino. Doors were locked behind her and other people taking refuge inside, but they could spy on the hall through a crack in the doors.

"They were bringing the wounded in. There were lots of them. People did not know what was going on because phones were dead."

"We were let out around 1p.m. local time. There were bodies covered by blankets in the hall. More bodies were strewn along the road," Davletova said.

RIA Novosti spoke with Vagelis Antonakos and Amalia Kolovou, a newly-wed couple from Greece who left the scene of tragedy minutes before the attack.

"We were in the exact spot where the attack took place five minutes before it happened. It could have been us. We were waiting for a table in the restaurant when we saw people running panic-stricken along the street."

They said diners started getting up and throwing over tables as they ran to basements and toilets.

"People were just running and screaming and panicking for about 30 or 40 minutes and that when the police started to evacuate the Promenade des Anglais."

The couple said they were not going to France any time soon. "France will be destination that I will have second thoughts returning to. I mean, it’s not the first time something has happened is it? France is a no-go for me from now on."