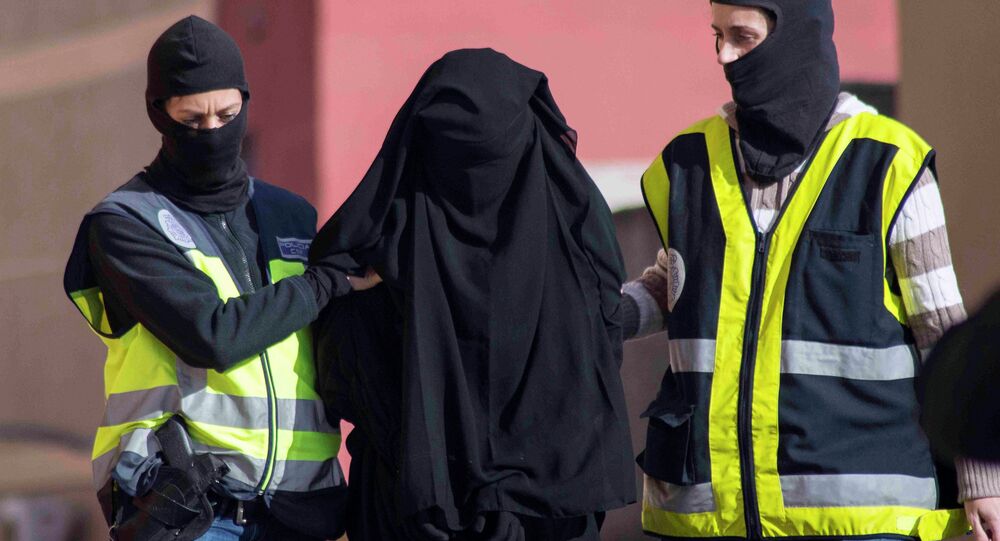 One in Three Islamists Detained in Spain Prepared Terror Attacks

Spanish police have detained more than 150 Islamists over the last four years, of whom 35.4 percent had prepared terrorist attacks in Spain the study found, adding that most of them had links to other extremists.

© AP Photo /
Spain Prevented at Least 10 'Serious' Terror Plots Since 2011
MADRID (Sputnik) – One in three Islamists detained in Spain had prepared terror attacks in the country, a study conducted by the Spanish Royal Institute Elcano showed.

Spanish police have detained more than 150 Islamists over the last four years, of whom 35.4 percent had prepared terrorist attacks in Spain the study found, adding that most of them had links to other extremists.

About 82 percent (124 people) of those detained had linked to the Islamic State (ISIL or Daesh, outlawed in Russia) terrorist group and were in contact with Islamists in Morocco, Belgium, France and Turkey. Around 20 percent had links to the militant organizations Al-Qaeda in the Islamic Maghreb and the Movement for Unity and Jihad in West Africa, as well as their cells, the study revealed.

Almost a half of the detained Islamists (45 percent) were Spanish, while 41 percent were Moroccan. In total 52 percent of the suspects were first generation migrants, compared to the 42 percent who were second generation migrants — most of whom were born in the Spanish exclaves of Ceuta and Melilla, according to the research.

Almost 90 percent of the Islamist suspects were born into Muslim families yet only 11 percent of them showed a deep knowledge of the religion.

© AFP 2020 / CRISTINA QUICLER
US Army Base in Spain Will Be Terrorism Target – United Left Coalition
The youngest Islamist detained was 16 years old, the oldest – 58 years old. Some 85 percent of the extremists were 44 years old or younger, the study found.

At least 160 Spanish Islamists are believed to have left for Syria, of whom 29 have been reportedly killed there and 20 have returned to Spain.

The research shows that 28 percent of the Islamists lived in or around Barcelona and a significant number of arrests were also carried out in Madrid, Ceuta and Melilla.

According to study, the most common vehicles for the dissemination of radical ideas are religious facilities, Muslim cultural centers, private homes and prisons, and not the Internet or social networks.