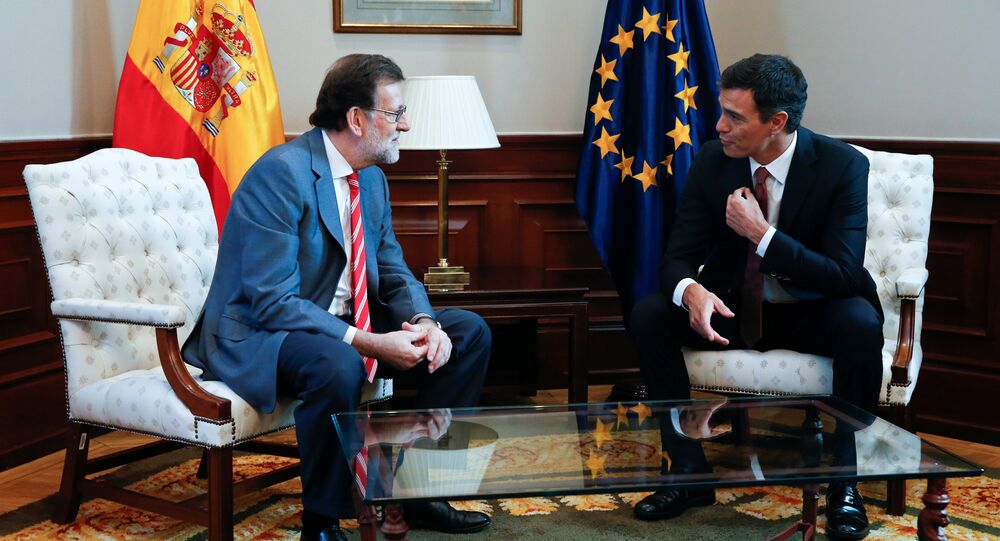 Spanish Socialist Workers' Party (PSOE) leader Pedro Sanchez said that his party will vote against the candidacy of Mariano Rajoy from the Popular Party (PP) for prime minister.

"The Spanish Socialist Workers' Party is not in the ranks of Rajoy's potential allies. If there are non-aligned politicians, who can support the approval of prime minister, it is necessary to use it. But Rajoy does not have any votes to add them to 137 mandates of the PP. He can not rely on the socialist party for the support. We will vote against [him]," Sanchez said, following negotiations with Rajoy.

© AP Photo / Daniel Ochoa de Olza
Spain’s Rajoy Declines Offer to Run for Prime Minister - Reports
He added that Rajoy should look for the required votes to form the coalition among his potential rivals, but not among the PSOE members.

The 2016 Spanish general election was held on June 26, the PP received 33 percent of all votes counted, followed by the PSOE with 23 percent and the left-wing Podemos with 21.1 percent. The liberal Citizens finished with 13 percent.

Rajoy needs at least 176 votes in the 350-seat Congress of Deputies, the lower house of Spanish legislature, to be elected as country's prime minister in the first round, or just a simple majority in the second one.