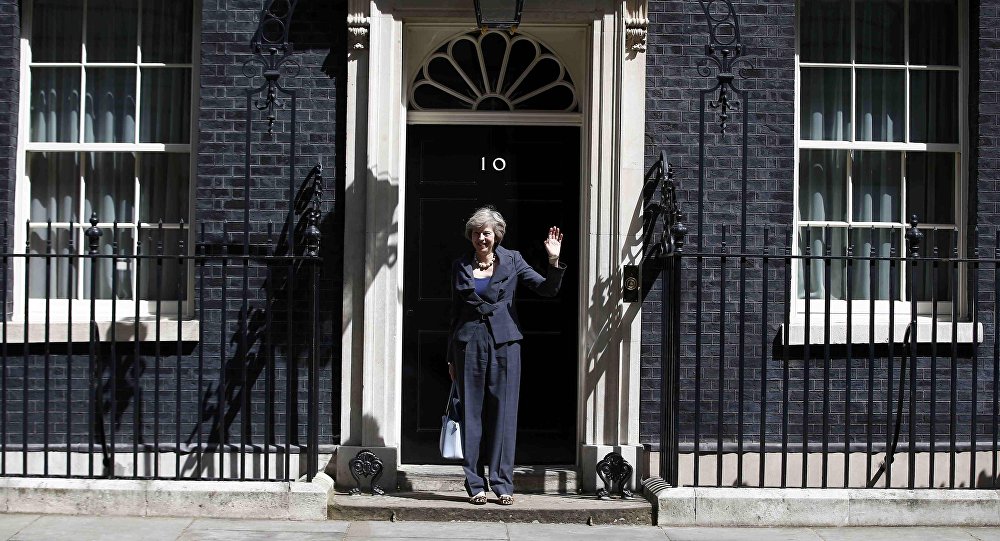 As Britain’s Home Secretary and the new leader of the Conservative Party, Theresa May is preparing to move into the Prime Minister's residence at 10 Downing Street later on Wednesday; the long-time chief English interpreter for Mikhail Gorbachev says she takes up office “in the shadow of Thatcher” and lacks an explicit program.

“There are no doubts that Margaret Thatcher’s shadow will hover over her for quite a time,” Pavel Palazhchenko, the long-time chief English interpreter for the last Soviet leader Mikhail Gorbachev, told RIA Novosti.

“However, Theresa May is in a far more difficult situation right now, and it is hard for me to imagine how she is going to deal with it,” added Palazhchenko, who used to interpret for Gorbachev during negotiations with Margaret Thatcher, among others.

The former interpreter, who also served as a diplomat for the then-Soviet Foreign Ministry, also noted that, unlike Thatcher, May does not have any explicit program.

© REUTERS / Paul Hackett
Britain's Home Secretary Theresa May, who is due to take over as prime minister on Wednesday, arrives for a cabinet meeting at number 10 Downing Street, in central London, Britain July 12, 2016

“Upon taking up office, Thatcher had a very clear ideological and tactical program for further achievements and targets. Thatcher pursued an ideology of a certain type of capitalism," he explained, adding that she deeply believed in her system's inherent advantages.

However, Palazhchenko noted that the nature of Britain’s internal policy has already been shaped, and there is no need for any revision.

As for the country’s foreign policy, instead of implementing any of her own programs, the new Prime Minister will instead have to manage the decision the British voters made by choosing to leave the European Union in the Brexit referendum.

Britain's Home Secretary is responsible for the Home Office, which manages the internal affairs of England and Wales, as well as immigration and citizenship for the United Kingdom. It oversees security-related issues such as drugs, counter-terrorism, and ID cards. It is analogous to the interior ministries of many countries and shares characteristics with the US Department of Homeland Security.

Palazhchenko added that negotiations on Britain’s exit from the EU might take over 2.5 years and that the final decision might not be even taken during May’s premiership.

Nevertheless, the former interpreter said that Theresa May, as the second woman to serve as Prime Minister in British history, will be inevitably compared with Margaret Thatcher, who earned the nickname “Iron Lady.”

At the same time, he said, in her foreign policy Thatcher was a realist who clearly understood that the UK couldn’t play a leading and dominant role on the world arena. Thus, in the negotiations with Gorbachev, she never stuck to her image of an “Iron Lady” as it would have simply been unrealistic.

© AFP 2019 / Leon Neal
How May's Appointment as British PM Will Change UK-Russian Relations
The former diplomat said that so far it is too early to predict the same political longevity and similar achievements for Theresa May, especially in an environment where the political careers of leading politicians can be undone by a referendum.

The vote, he noted, left many politicians "out in the cold”, including former mayor of London Boris Johnson. However, Theresa May was able to “outlive” a number of more famous and more successful rivals in the political arena.

He compared the “political landscape” of Great Britain after the referendum with the final act of some of Shakespeare’s tragedies: “a scene full of dead bodies.” He added that such a “landscape” will stimulate May to take more cautious and measured steps in the international political arena.

Meanwhile, a large blue moving van was noticed pulling up on Downing Street on Tuesday to retrieve the belongings of the former British Prime Minister.

According to reports, David Cameron’s home in the North Kensington area of west London has been rented out, and their farmhouse in the hamlet of Dean, Oxfordshire, about 73 miles (117 km) northwest of London, is probably too far for daily commuting.

The arrival of the moving van at the rear entrance on Downing Street might suggest that the Camerons have at least found temporary lodgings.

The only member of the household to remain in place is the chief mouser of the cabinet office, Larry the Cat, yet another challenge for the incoming Prime Minister.

The cat has already tweeted some funny posts, like the one that read “you’re only getting a new Prime Minister. I’m getting a new owner. Hold me.”

​So far, it only remains to be seen what changes Number 10's new resident will make to the political atmosphere, and whether her tenure there will be as long-lived as Lady Thatcher's in the so-called “post-Brexit era”.