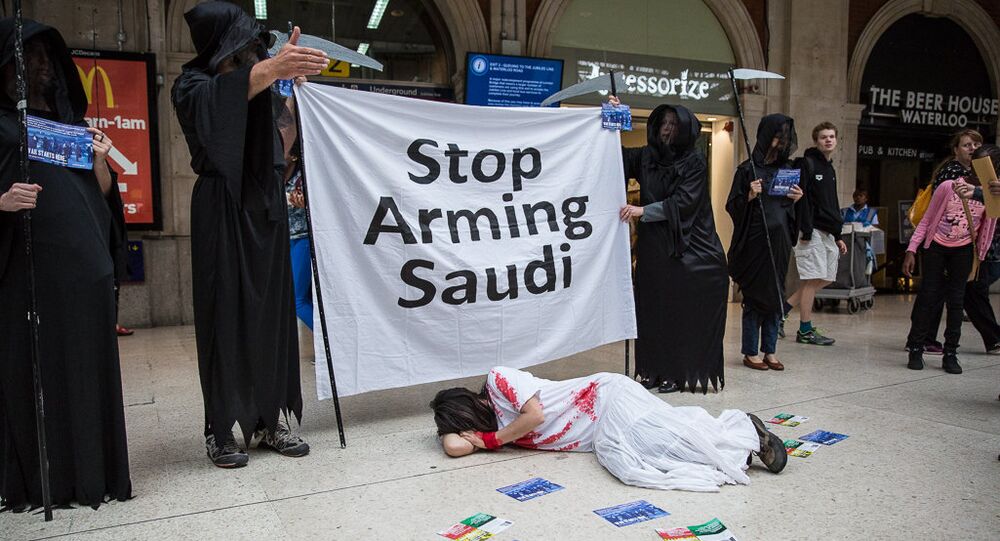 Arm dealers are gathering in the UK for the Farnborough International Airshow - a biennial high-profile defense trade event that has attracted 81 military delegations from 50 countries, including some of the most oppressive regimes in the world.

Ministers and government bigwigs are participating in the gathering, which takes place in Hampshire but was opened on Monday (July 11) during an exclusive reception held at the London Science Museum.

Charity organization Campaign Against Arms Trade (CAAT), took exception with a globally renowned symbol of British science being turned into a venue for discussing the sales of weapons, and other deadly gear. On Monday night, CAAT organized a protest outside the museum.

"Science and education are key to our society and far too important to be sacrificed on the altar of arms trade," CAAT Spokesman Andrew Smith told Sputnik.

"They cannot put science on one side while welcoming arms dealers and human rights abusers to one of the most visited museums in Britain. And arms dealers are using the Science Museum exactly because of its prestige: it's exactly the sort of place that is going to help them do business tonight."

The trade show has opened just days after the UK High Court — prompted by a CAAT's campaigns — ruled that the British government's decision to keep arming Saudi Arabia should be taken to a Judicial Review. Since last year, the Gulf kingdom has been involved in a prolonged airstrike campaign in Yemen — against the Houthis — which according to Human Rights Watch has often resulted in civilian deaths. A disproportionate amount of non-combatant victims has also been confirmed by the UN.

According to CAAT, Saudi forces have used UK-made weapons and military vehicles to commit human rights abuses. In its review, the High Court will have to ascertain if UK arms sales to Riyadh should be considered as a breach of British and European arms export laws.

"We are calling for an end to arm sales to Saudi Arabia based on extensive evidence that UK weapons are being used to violate international humanitarian law by Saudi Arabia in Yemen," Smith told Sputnik.

At the main doors of science museum, which is trying to host an arms trade dinner tonight pic.twitter.com/XjZxFAf5Rn

"In fact, Human Rights Watch managed to link specific British weapons to specific attacks on civilian targets in Yemen. It's clear that as long as the UK is arming Saudi Arabia, it is not only providing military support, but also political support to what is a humanitarian catastrophe."

As the UK is still reeling after the shocking result of the EU referendum, and Theresa May is set to take over Downing Street on Wednesday (July 13), CAAT expressed little hope that the new Prime Minister could change the UK's policy towards the Saudi regime.

If anything, May could be even less sensitive to the topic of human rights violation than his outgoing predecessor David Cameron: as Home Secretary, she has repeatedly proposed that the UK leave the European Convention on Human Rights.