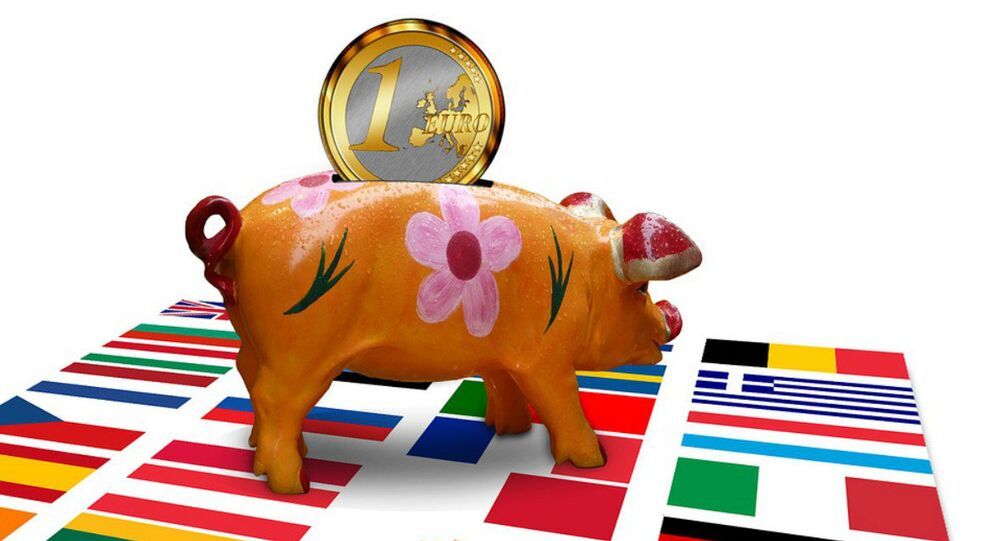 "Europe is seriously ill," according to Deutsche Bank, and while Italy's problems have been well-documented recently, analysts told Sputnik that a closer look at German banks reveals that even Europe's economic powerhouse could find itself financial difficulties.

© AFP 2021 / EMMANUEL DUNAND
Poland Leaks French-German Plan for EU Superstate Amid Brexit Chaos
While Brexit seems to have served as a catalyst for Europe's political crisis, financial experts are warning that a crisis also appears to be brewing on the European financial front.

The structural weaknesses that became apparent during the 2008 financial crisis have not been tackled sufficiently, and analysts are worried that Europe's banks are facing more financial pressure than they can cope with.

"Europe is seriously ill, and it must urgently address its problems, otherwise something bad will happen," he warned, and recommended a multibillion euro program of recapitalization for flailing European banks.

According to Folkerts-Landau, Europe needs a recapitalization program similar to Troubled Asset Relief Program carried out in the US after the subprime mortgage crisis hit there in 2008. That program authorized the US Treasury to spend $475 billion on toxic assets and equity from struggling financial institutions.

"In Europe the program doesn't have to be so big. European banks can recapitalize themselves with 150 billion euros ($167 billion)," Folkerts-Landau said.

Economics professor Guillaume Vuillemey from the Ecole des Hautes Etudes Commerciales de Paris (HEC Paris) told Radio Sputnik France that the problems in Europe's banking sector are not confined to the more stagnant economies on the south of the continent.

Who will pay the price for Italy's banking debts?

© Sputnik / Alexander Vilf
'A Bomb Waiting to Explode': Crisis in This EU Country May be Bigger Problem Than Brexit
Last week reports emerged that Italy is facing a banking crisis, as its GDP grew by just 0.8 percent in 2015 and is predicted to grow by 1.1 percent this year. This has made it harder for businesses there to keep up loan repayments with banks, which are in possession of €360bn in non-performing loans, by far the largest amount in the Eurozone.

The large national debt of the Italian government, 133 percent of GDP, compounds the problem because the government has less scope to cuts taxes or increase public spending to try and boost growth.

"The European banking sector does not have much capital at the moment … Italian banks are in a relatively poor position in comparison with banks of other countries," said Vuillemey, who traces back European banks' instability to Europe's failure to adequately tackle its debt crisis.

"It is clear that all these banks are still paying for the sovereign debt crisis. Only a few of them have managed to reach a level of capitalization sufficient to ensure long-term stability," Vuillemey said.

Are the ECB's asset purchases delaying a new crisis?

Vuillemey said there are several issues facing banks in Italy and other areas of the Eurozone.

"It is clear that banks need funding, but the second question is a different one. Who is supposed to give it to them? Here there are two possibilities: either the EU, or the (national) government), or the markets themselves. It is clear that today capitalization from the market is preferred, not from the government. There have to be stimulatory measures so that shareholders buy more securities and they, not taxpayers, take on the risks of banking assets."

© AFP 2021 / ARIS MESSINIS
Secret ECB Docs Point to More Financial Mayhem on the Horizon
The economist said that the asset purchase program of the European Central Bank, which aims to increase inflation and stimulate economic growth in the Eurozone by increasing the demand and price of public and private sector bonds, is not a solution to the financial issue because it fails to reduce sovereign debt, and has led to negative yields on sovereign bonds.

"The ECB through its quantitative easing program is buying large amounts of sovereign debt. They are buying these bonds and so the price goes up, which lowers their rate of interest. So we find ourselves with loans for which the interest rates are becoming more and more negative."

"So, these figures (the price of Eurozone debt) are true in part, because a large part of the German debt is supporting negative interest rates at the moment."

Not just a Mediterranean problem

While Italy's problems, and the lack of a comprehensive solution for the debt issue, have become well documented,  Vuillemey explained that Germany's banks also face instability because of the large amount of debt that exporters there have taken on.

"In terms of the real economy, Germany is doing well, at the level of industrial production and suchlike. At the level of the German financial system, particularly regarding very large banks, the sector is very unstable," he warned.

"In particular (this is a problem) with regard to the credit of exporters, which is bringing down the balance sheets of German banks, and some of them are in great need of recapitalization."

"So it's possible that there are things in the German financial sector which are reason to worry for the future."