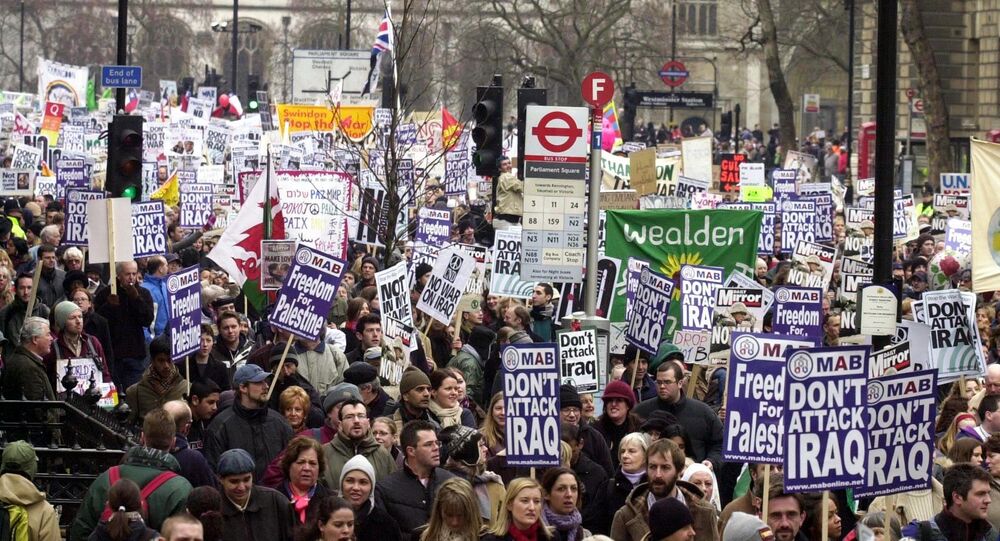 A Million Marched Against a War That 'Damaged Britain's Reputation'

On February 15 2003, more than a million people marched through central London in protest of the imminent invasion of Iraq by US and British forces.

Police at the time said it was the biggest ever demonstration in the UK with anti-war marches also taking place in Glasgow and Scotland and contingents arriving in London from 250 cities and towns across the Britain.

© AFP 2020 / Nicholas Asfouri
Opponents of the US-led war on Iraq demonstrate en masse in central London 15 February 2003 as tens of thousands of anti-war demonstrators around the world took the streets.

It still remains the biggest political demonstration in British history.

The anti-war march, which passed peacefully, was organized by Stop the War Coalition, the Campaign for Nuclear Disarmament (CND) and the Muslim Association of Britain.

Playwright Harold Pinter spoke to demonstrators and said: "America was a country run by a bunch of criminal lunatics with Tony Blair as a hired Christian thug."

"A hired Christian thug!" ~ How playwright Harold Pinter called British PM Tony Blair in 2003 prior to the inversion of Iraq.

​The late Labour politician Mo Molam, told protesters at the gathering in Hyde Park that the Iraq invasion would be, "the best recruiting agent that the terrorists could hope for."

​But it was clear that there was very little public appetite for a war without evidence of the existence of weapons of mass destruction, not only on the streets of London, but results from an Ipsos Mori poll four years later, in 2007, revealed that 83 percent of those asked opposed the war in Iraq.

Thirteen years later and over half of the British public believe Britain's involvement in Iraq damaged the UK's reputation around the world.

Back in 2007, only 11 percent of people said they supported the Iraq war, on the tenth anniversary of the invasion of Iraq in 2013, a poll by Ipsos Mori showed that 70 percent of people thought Britain was wrong to get involved, with over half of all those surveyed saying they opposed the war all along.

According to Ipsos Mori, opposition to the war was driven by a feeling of being lied to, particularly by Tony Blair and especially on the existence of weapons of mass destruction — and events in Iraq was "none of our business."

Four in ten people polled think the war has made the world a more dangerous place — over half (52 percent) think that the UK invasion of Iraq in 2003 has damaged Britain's reputation in the world.

Managing Director of Ipsos Mori, Bobby Duffy said: "Over the ten years since the start of the Iraq war, we've seen public opinion shift significantly from initial support to clear opposition. There appears to have been some softening of this view among a minority, but there is still clear anger driven by a perception that the public were misled.

"People are also clear that this damaged our reputation around the world, more so than they believe that it improved ordinary Iraqis lives."

The decision to invade Iraq rests on Tony Blair's shoulders, who remains accused of having blood on his hands, having ignored more than a million people who marched in London in the biggest ever public demonstration in British history.