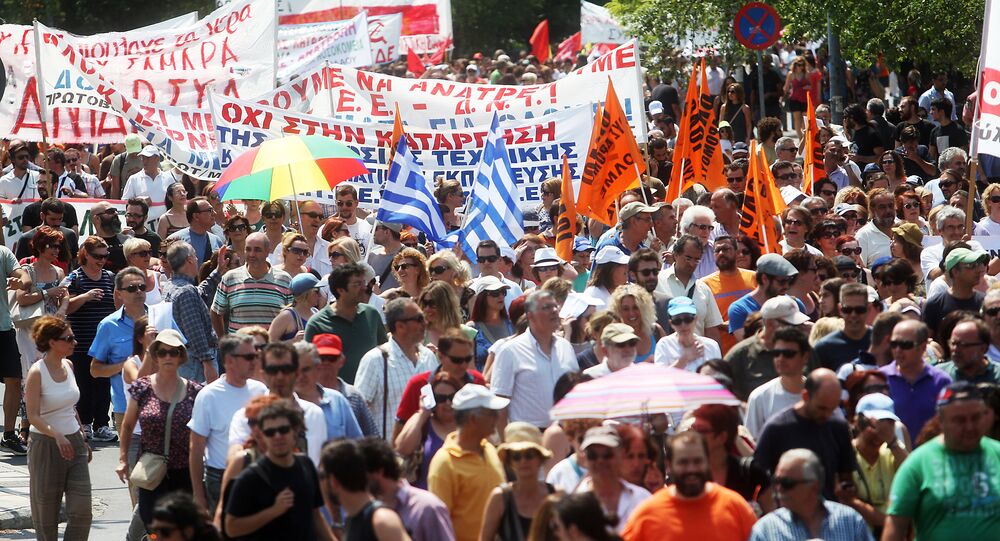 The Panhellenic Federation of Rail Workers (POS) said it will hold a 24-hour strike on Wednesday in protest against the government's plans to privatize national rail transport.

ATHENS (Sputnik) — The Greek TrainOSE railway company, which operates nearly all of the country's railway lines, as well as the ROSCO rail rolling stock servicing and maintenance company, are set to be privatized as part of the Tsipras government deal with international creditors to unlock further funds under the indebted country's third bailout package. The companies will put up for a tender sale on Wednesday.

"The catastrophic infrastructural sell-off is continuing. After the Port of Piraeus, the Ellinikon airport and regional airports, they are targeting public transport starting with the privatization of TrainOSE and the ROSCO rolling stock servicing company. Urban transport is next," POS said in a statement.

© AP Photo / SAKIS MITROLIDIS
Civil Servants to Rally Against Bailout Deal in Athens Despite Public Disapproval
The privatization will hurt ordinary Greeks, the union said, stressing that rail fares will rise and safety will decline.

The strike was previously planned for June 22, with the date later changed alongside the date of the tender for the two companies. The Athens metro will also come to a stop, making travel to and from the Athens International Airport difficult.

The walkout follows a series of short daily strikes that has taken place each morning and evening since June 28.

Athens signed a deal with its creditors, which include the International Monetary Fund (IMF), the European Central Bank (ECB) and Eurozone nations, in 2015 for a third bailout package worth about 86 billion euros ($96 billion) in exchange for highly unpopular austerity reforms such as pension cuts, tax hikes and public assets privatization.

On April 8, Greece signed an agreement to sell a 67-percent share in Port of Piraeus, one of the largest ports in the world, to the Chinese shipping company COSCO Group (Hong Kong) Limited.