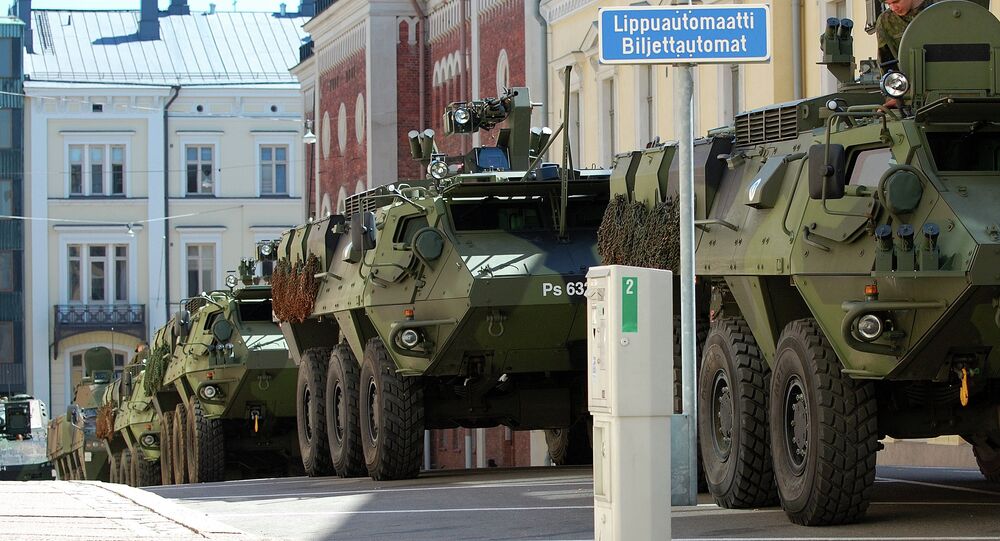 Last week, during a meeting with Finnish counterpart Sauli Niinisto, Russian President Vladimir Putin warned Finnish authorities about the possible consequences of that country joining the NATO alliance. Commenting on the president's words, Russian geopolitical analyst Boris Stepnov fleshed out exactly what those consequences might be.

Pointing out that Finland's entry into NATO would necessitate a Russian response, including moving Russian forces closer to the Nordic country's borders, the Russian leader added that Finland's military would find itself in danger of a conflict with Russia.

"To paraphrase the words of one of my Finnish friends, I could tell you that NATO perhaps would gladly fight with Russia to the last Finn. Do you want this? We do not. But decide for yourselves what you want," Putin said.

© Sputnik / Alexei Druzhinin
Putin Warns Finland Against Joining NATO, Says Moscow Would Shift Troops
Earlier this year, commenting on the possibility of fellow Nordic country Sweden entering the alliance, Russian Foreign Ministry Sergei Lavrov also hinted, perhaps less bluntly, that NATO membership would not benefit anyone in the region. "It is one thing when one's northern neighbors are neutral states, and something else entirely when they are members of the North Atlantic Alliance…which in the recent period has unambiguously declared deterrence of Russia as its objective and called Russia a 'major threat'."

"And really," Stepnov asked, in a punchy analysis for PolitRussia, "why would Finland want to become a NATO dependency?"

As recently as May, the journalist recalled, President Niinisto came out against his country's entry into the alliance. "My position is that we do not have any need to alter our current policy," he said, adding that "in Finland, many people understand that if Russia saw Finland as a threat, then Russia would [station] military materials close to the border with Finland."

A month later, the Finnish president shifted his tone, stating that Finland "can't exclude the possibility of applying for NATO membership. It would be a serious mistake [not to do so], because it's a tool of national security policy, and Russia knows that we have this tool. At this stage, we are developing our partnership and cooperation with NATO. If we see a significant deterioration of the security situation, we can apply for NATO membership," Niinisto noted.

© AP Photo / RONI LEHTI / Lehtikuva via AP, FILE
Finland Referendum on Joining NATO Possible
Recalling the complex and difficult history between Moscow and Helsinki, from the period of broad Finnish autonomy in the Russian Empire to the several wars which followed the Bolshevik Revolution and the run-up to the Second World War, Stepnov pointed out that by 1948, with the signing of the 'Treaty of Friendship, Cooperation and Mutual Assistance', the two countries entered a long period of peace and cooperation.

The Treaty, which contained a clause on military assistance in the event of "aggression from Germany or any other state allied with the latter," was renewed in 1955, 1970 and 1983, and obliged both sides "not to enter into any alliance or participate in any coalition directed against the other side." Following the collapse of the USSR, the agreement was terminated, and replaced by a new 'Agreement Between Russia and Finland on the Basis for Relations'.

That document, Stepnov recalled, did not contain an article on entry into alliances and coalitions; "Article 4 contained only a vague phrase to the effect that 'the parties shall not use or allow the use of their territory for armed aggression against the other party'. Essentially, the NATO alliance can stack bases in Finland on top of one another if they wanted to, and this can be interpreted as defensive!"

With regard to NATO's peaceful intentions toward Moscow, the journalist suggested that "the extent to which this can be believed has been illustrated by recent history. In the 1990s, NATO functionaries promised not to expand the organization eastward. A contemporary map reveals just how much their promises were worth."

​Commenting on the alliance's continued march to the east, and the regular attempts by local governments to provoke Russia, from the installation of bases and regular large-scale exercises near the country's borders in Poland and Romania to parades of Waffen-SS veterans in the Baltic countries, Stepnov bluntly suggested that maybe "the populations of these countries are purposely designated to incite a war against Russia, if need be." As for the horrendous consequences this would entail for ordinary East Europeans, "no one cares about them, but imagine the propaganda effect!" seems to be the NATO logic.

Ultimately, recalling that President Putin's comment on NATO's desire to fight Russia "to the last Finn" is very similar to the phrase popularized in the aftermath of the Maidan coup in 2014 that "the United States will fight Russia to the last Ukrainian," Stepnov suggested that the sentiment accurately reflects the fate of all countries whose territory might be used to start military aggression against Russia.