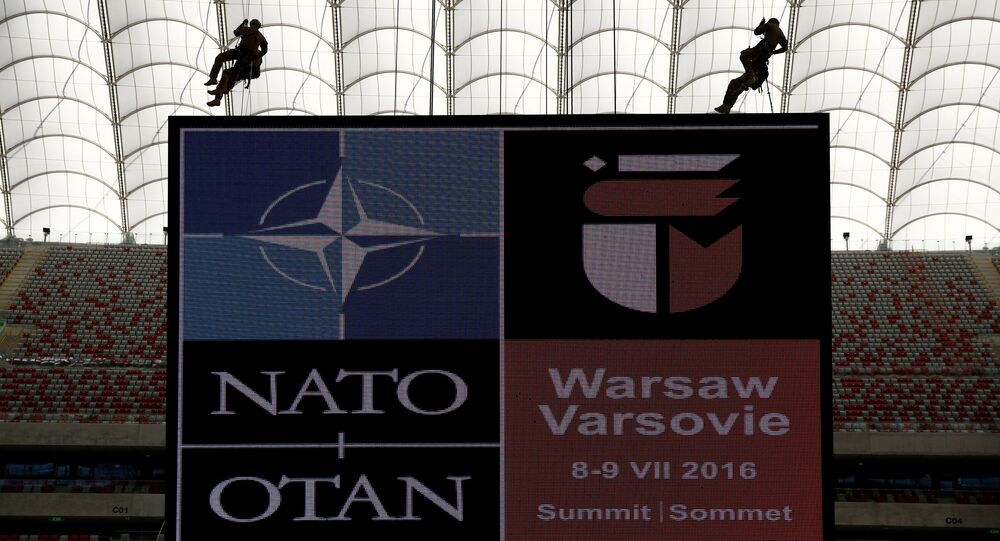 The Czech Peace Forum has written an open letter to the country's Prime Minister, telling him that the NATO does not serve the interests of the Czech people.

© Wikipedia / ŠJů
No Diving (Fully Clothed): Czech Spa Town Makes Pamphlet for Arab Guests
Members of the Czech Peace Forum have sent an open letter to the country's Prime Minister Bohuslav Sobotka ahead of their participation in NATO's summit in Warsaw later this week.

The organization's President Vladimira Vitova told Sputnik Czech Republic that they were moved to do so because of a range of problems faced by the Czech people, which are not being addressed by those in power.

"We are upset about migrants and upset about EU bureaucracy, but not one political party in the Czech Republic has commented on the NATO summit in Warsaw on July 8-9," Vitova explained.

Vitova described the Warsaw meeting as "key, because NATO is finding ever more pretexts for war."

She said that her organization is worried about NATO's increasingly belligerence and detrimental effect on world peace, and the reluctance of the Czech government to represent the interests of the Czech people.

"The agenda of the NATO conference that has been announced in the media violates international laws, which the Czech Republic is obliged to fulfil," Vitova said.

© AFP 2020 / DOMINIQUE FAGET
Czech Government Rules Out EU, NATO Membership Referendums
She explained that the group has send a request to the Czech Prime Minister and Defense Minister, asking them whether participation in the conference is in accordance with their obligations as international representatives of the Czech Republic.

"Basically, the letter is asking whether the government delegation will act in accordance with the Constitution of the Czech Republic, will observe the UN Charter and principles of relations between the Member States of the Organization for Security and Co-operation in Europe (OSCE), and also the North Atlantic Treaty signed April 4 1949."

Vitova said that NATO's activities are in violation of Article One of the Treaty, in which the parties undertake to settle international disputes by peaceful means, and refrain from the threat or use of force in any manner inconsistent with the purposes of the United Nations.

Vitova added that her organization hopes the letter will also serve to provide information about the summit for Czech citizens, whose interests deserve to be better represented at the conference.

"The Constitution of the Czech Republic states the following: the people are the source of any state power, which is exercised by means of legislative, executive and judicial power. That means that the executive authority headed by Bohuslav Sobotka is not the master of the people, but their instrument. That is what gives (him) powers in negotiations at the NATO summit in Warsaw."

© AP Photo / Jonathan Ernst
In Wake of Brexit NATO Summit Turns Into 'Crucial Test of Coherence'
It remains to be seen whether Prague will heed the calls from the pressure group to defend Czech national interests in the face of NATO pressure to increase military operations and spending.

On Monday NATO Secretary General Jens Stoltenberg stated the agenda for the alliance's Warsaw summit, acknowledging in the process that its outcome is a foregone conclusion.

"At our Summit in Warsaw, we will agree to further enhance our military presence in the eastern part of the Alliance," said Stoltenberg.

He said the NATO agenda for the week includes an finalizing agreement between the defense ministries to participate in the deployment of multinational NATO battalions to Estonia, Latvia, Lithuania and Poland, and a multinational brigade in Romania.

Stoltenberg also said that NATO wants members to further increase their defense spending, which has risen by three percent ($8 billion) in 2016.

Czech FM Urges to Speed Up UK's Exit From EU