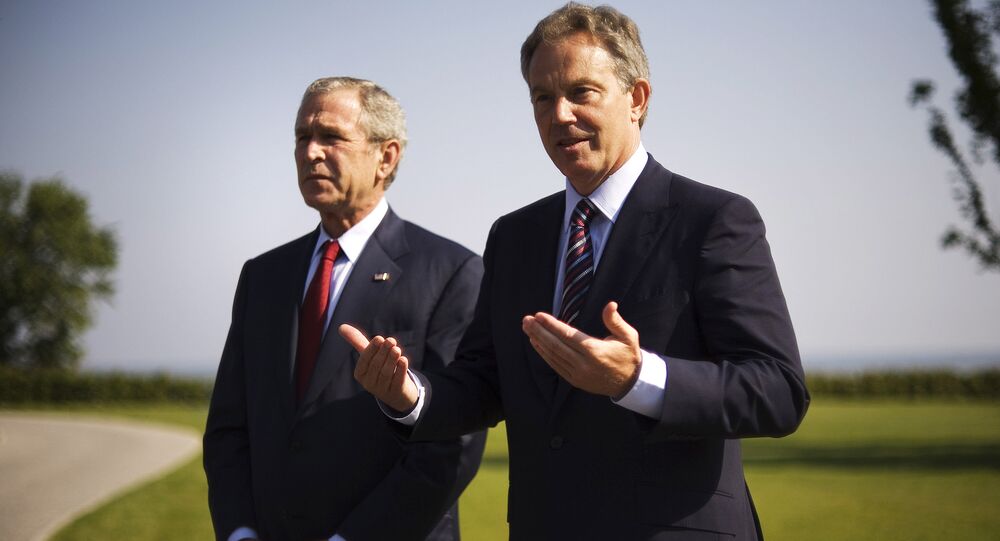 Whatever the conclusions of the official inquiry into Britain's decision to invade Iraq in 2003 and topple Saddam Hussein, former UK Prime Minister Tony Blair - who took the controversial decision - will forever be linked with the "disaster" that has ensued, Sputnik has been told.

Having failed to secure a definitive resolution for an invasion from the United Nations, the US and UK — led by George W Bush and Blair — began a campaign against Hussein, who they said had weapons of mass destruction, in order to topple his dictatorship.

Blair has always denied he made a secret pact to join Bush in the invasion, without seeking the prior approval of the UK Parliament. He also denies misleading parliament as to the military capabilities of Hussein.

The report on the decision to go to war in Iraq and its consequences — chaired by Sir John Chilcot — is due to be published on July 6, having been sitting since 2009. It follows a previous report — the Butler Review — which found that intelligence reports of Hussein's weapons of mass destruction had been unreliable.

Chris Nineham, a founding member and National Officer of the Stop the War Coalition in the UK, told Sputnik:

"The truth is, however frustrating all these endless delays have been and the whitewashes of the previous reports, the fact remains that Tony Blair's name is forever linked to the disaster of that war."

"That's a testimony to the strength of feeling that people have on this issue and to the campaigning that's been done inside parliament, outside parliament, on the streets and so forth. And that's not unimportant because it makes leaders think twice before they take us into these adventures again and that's really the most important thing about this."

Nineham told Sputnik the Chilcot report will not accuse Blair of outright lying, but it will suggest Blair manipulated the way evidence was presented when making the case for war.

"It's never been admitted by the establishment that Tony Blair undoubtedly lied to parliament and the people in the process of trying to take us to war in Iraq. And secondly, I think there's a very strong feeling that this was an illegal war and no matter what position they have in society, people who break the law, should be held accountable for it," Nineham told Sputnik.

"It won't say specifically that Tony Blair lied. Having said that, I think there will be enough information in the report — because that information is already in the public domain — to prove beyond reasonable doubt that that's exactly what happened: that Tony Blair deliberately falsified the evidence to parliament; that he knowingly made an agreement with George Bush to take us into an illegal war of regime change without reporting that to cabinet or to parliament."

​"And those two things in themselves are — or should be enough — in any sensible judicial system to lead to an impeachment.

© REUTERS / Kevin Coombs
Chilcot Report: Tony Blair Could Face UK Legal Action Over Iraq Invasion
"I think crucially — I mean I'm not saying this is going to happen — but it does sound like there will be calls for that in parliament and I think, as I say, those calls will find a very, very strong echo around the country. And that in itself is important. I mean, whether or not, at this precise moment, legal proceedings begin, the call for them will be louder and stronger than ever before."

However, the International Criminal Court has said that, although it will consider the Chilcot report, "the specific question of the legality of the decision to resort to the use of force in Iraq in 2003 — or elsewhere — does not fall within the legal mandate of the Court, and hence, is not within the scope of its preliminary examination."