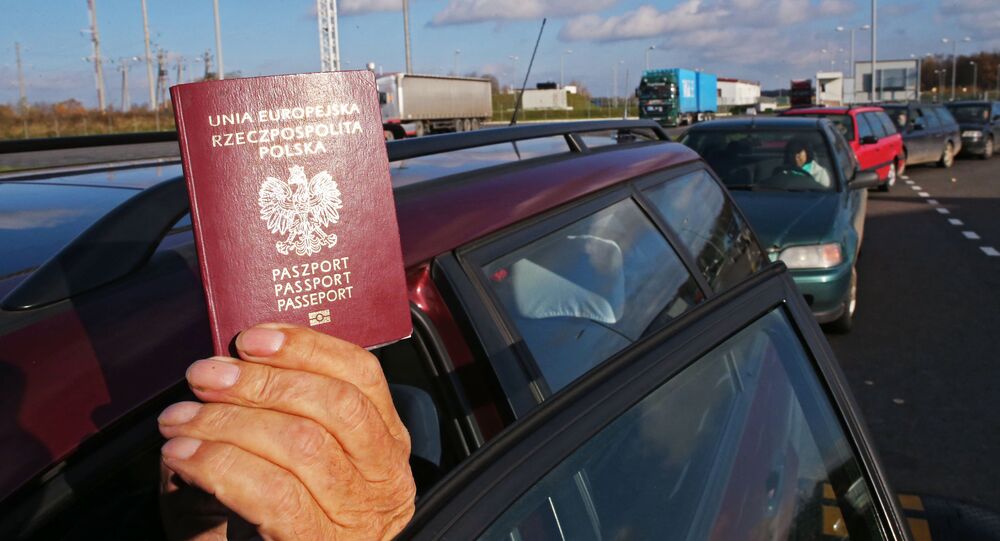 Poles Stuck in Russia After Warsaw's Introduction of Border Restrictions

"We are stuck. People are constantly calling the embassy in Warsaw. There are no facilities here for us to stand here for so long," a truck driver stuck in a traffic jam at the border told the channel.

According to TVN24, a line of vehicles 1.5 kilometers long has accumulated at one border crossing between Kaliningrad and Poland, with waiting times of up to 20 hours.

© AFP 2020 / YURIY DYACHYSHYN
Ukraine Protesters Disrupt Traffic to Poland Over Border Controls
The restrictions were introduced by the Polish Foreign Ministry in connection with the forthcoming NATO Summit in Warsaw on July 8-9, and the Catholic World Youth Day festivities, to be held July 26-31 in Krakow.

Earlier, Poland's Rzeczpospolita newspaper explained that Polish authorities had enhanced controls on the country's border with Russia, Ukraine and Belarus. A Russian-Polish agreement on local border area traffic between Poland and the Russian exclave of Kaliningrad was also temporarily suspended as of July 4. Mobile, random border checks operating in 285 spots have also been established on the country's borders with the Czech Republic, Germany, Lithuania, and Slovakia, and at ports and airports.

The Russian-Polish agreement on local border movement stepped into force in July 2012. The agreement covers the entire Kaliningrad region, and parts of Poland's Warmia, Mazury and Pomerania regions. The bilateral agreement involves a simplified procedure for crossing the border, under which residents of the Kaliningrad region and the bordering Polish regions can cross the border with a valid passport and permit card, granting them the right to stay in the other country for up to 30 days at a time, and 90 days within a six month period.

© REUTERS / Kacper Pempel
Poland Introduces Temporary Border Control Amid NATO Summit in Warsaw
According to the Polish Defense Ministry, the upcoming NATO summit will be the largest in the history of the Alliance, and will be attended by some 2,500 officials from both NATO countries and non-member states. The delegations of 58 countries, plus representatives of NATO headquarters, the World Bank, the UN and the EU are expected to attend.

Polish and international protest organizers have vowed to hold a series of events, including conferences and protests in the streets of Warsaw, bringing together anti-NATO, anti-war activists to discuss and debate alternatives to militarism and war.