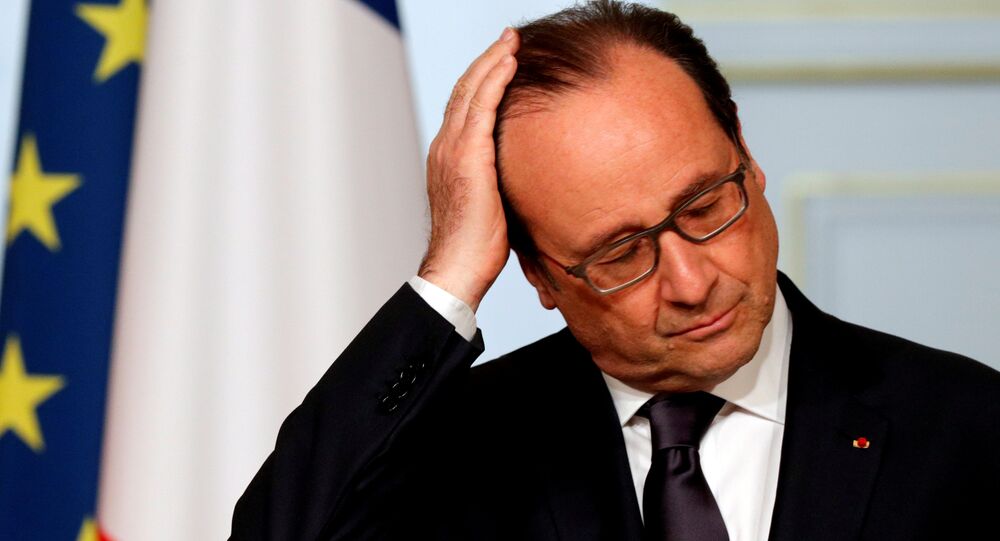 With the next presidential elections less than a year away now, French President Francois Hollande has seen his popular support plummet down to just 12 percent, Le Figaro wrote citing a recent survey by TNS Sofres-One Point pollsters.

© AFP 2021 / DENIS CHARLET
Hollande in PR Disaster as Euro 2016 Kicks Off Amid Garbage Sacks, Strikes
Twelve percent of respondents said they trusted the President, while 86 percent said they did not like the way Hollande was tackling the country’s problems.

According to Le Figaro the President’s rating has never been so low. Prime Minister Manuel Valls was supported by 20 percent of those polled.

The survey of 1,000 adults was conducted between June 23 and  27. The next presidential elections in France will take place in June 2017.

Radio Sputnik conducted its own survey of how people in France feel about their President’s performance.

“If you want my opinion, I’m not happy. Maybe there are those who are, but no one I know of,” said one respondent.

“I must admit that I voted for him, but I’m greatly disappointed by what he’s done during his presidency,” said another.

“I think that neither left nor right will be able to do much, because they are all doing the same thing. This is all the result of globalization we have to live with, that’s all.”

“This is a man who is so good at cheating us all. Because with these new taxes and pre-election kickbacks I don’t see how these 12 percent are possible.”

“I can’t say that I’m happy, but I understand the problems the President has to deal with given the situation now existing in the world. To run a country you’ve got to be a real leader. I don’t think he is a leader, rather a party general secretary, not President of the Republic.”

“Is there anyone who is happy about Francois Hollande? He never did what he promised us!”

“How can you be happy about someone who lives inside an ivory tower?  Someone who acts before he thinks? Looks like our leaders are savoring their powers and are not really listening to the people. This President does not deserve our support.”