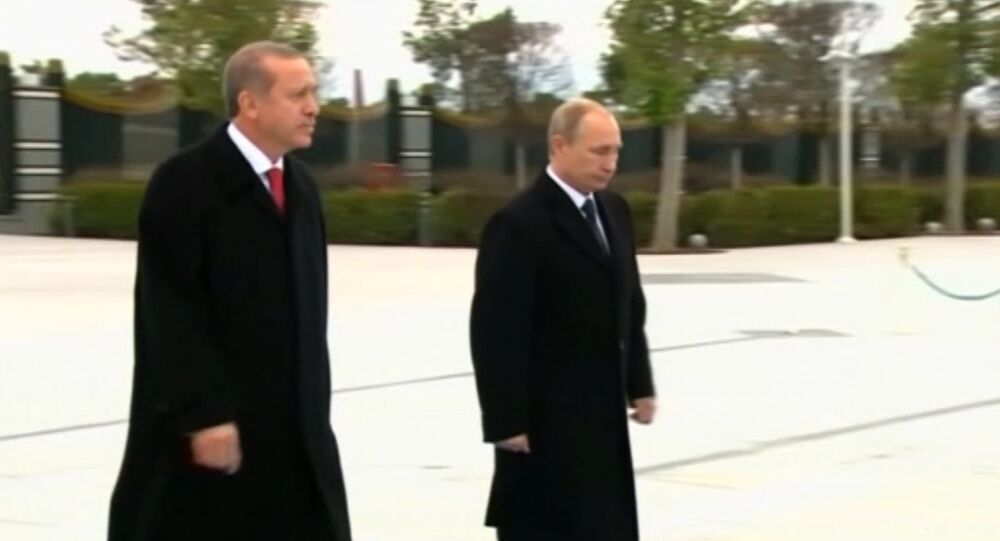 With Russian and Turkish presidents scheduled to have a phone conversation on Wednesday in a bid to improve strained relations between the two countries, Radio Sputnik asked Hasan Ozertem, Director of the International Strategic Research Organization's Center for Security and Energy Studies, to comment on this.

“President Erdogan said he was sorry about the downing of the Sukhoi Su-24 jet in November, and I suppose that it is now up to President Putin to decide whether this is enough and can be accepted as an apology. If so, then we can see an improvement of the Turkish-Russian relationship,” Hasan Ozertem said.

But why has President Erdogan decided to say he is sorry now seven months after the deadly incident when a Turkish F-16 jet shot down a Russian Su-24 warplane in a Syrian province?  Hasan Ozertem supposed that "there are certain issues, including regional security and economic interests” of the Turkish administration.

© Sputnik / Ekaterina Chesnokova
Erdogan's Letter May Facilitate Thaw in Russia-Turkey Relations - Matvienko
After his appointment as Turkish Prime Minister, Binali Yildirim said that his policy would be more about making friends, rather than enemies.

“We are already witnessing the results of this policy with the Israeli-Turkish rapprochement and this letter of apology to Russia. I suppose there are certain issues to be tackled here, including regional security and the economic interests of the Turkish administration.”

With relations between Russia and Turkey severely damaged by the November 24 incident with the Russian bomber, mending fences between Moscow and Ankara will hardly happen overnight.

Hasan Ozertem acknowledged this, but noted that with a resumed dialogue the two countries could talk about ongoing issues in the region and move forward on how to deal with the problems at hand.

“I believe that we will have some widows of opportunity opening this autumn, but regarding business relations, these could take more time to restore. There are so many institutional things that have been damaged by the downing of the Russian jet.”

With traditional Turkish fruit and vegetable imports now being replaced by food coming from other places, including Africa, Hasan Ozertem said that Turkey had big advantages here including its proximity to Russia, resulting in lower transportation costs, and that the existence of a long-term relationship between Turkish exporters and Russian importers made it easier for them to go back and restore their mutually-beneficial cooperation.

“The construction sector is another important area of Russian-Turkish cooperation, and the big Turkish companies are very closely following this process of normalization,” Mr. Ozertem said.

When asked about whether the Syrian issue would be high on the agenda of Thursday’s telephone linkup between Presidents Putin and Erdogan, he said that hardcore issues like Syria will certainly be discussed, but not as much as the proposed normalization of between Russia and Turkey.

“The sides may agree or disagree on certain issues, but some of these issues will be tackled easier than before.”
Apart from its attempts to mend relations with Russia, Turkey has recently signed a reconciliation deal with Israel.

“Turkey was talking about having zero problems with its neighbors  already a couple of years ago and Turkey is now trying to take down the current challenges [posed by Daesh and other terrorist groups]. The primary issue that needs to be solved is to restore normal relations with neighbors, primarily with Russia and Israel.”

“I suppose that Turkey and Russia are now trying to go back to normal because the ongoing situation in Europe and the Middle East is bringing so many challenges for both parties,” Hasan Ozertem said in conclusion.