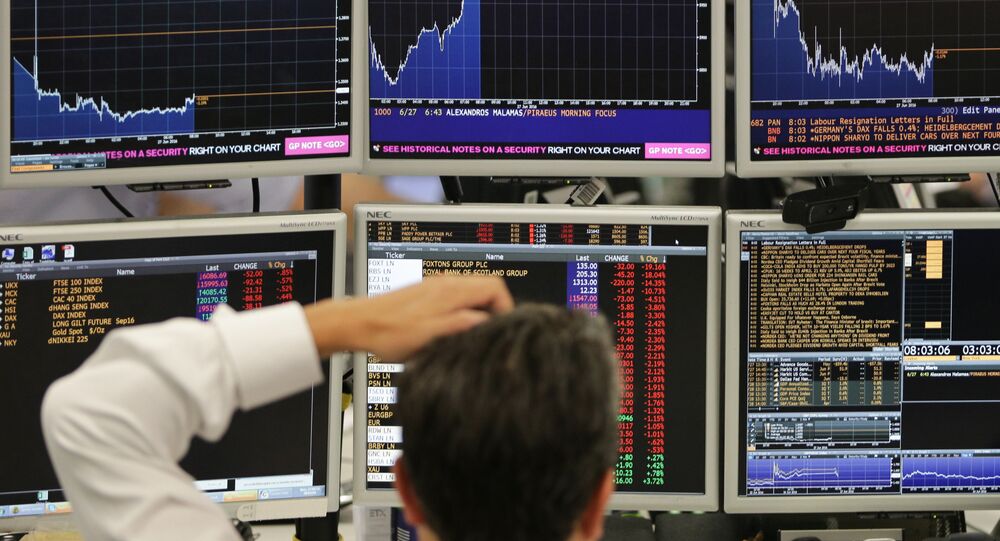 Dismal forecasts for the UK’s economy in the aftermath of Brexit are only valid in the nearest term due to panicking investors; meanwhile, macroeconomic fundamentals appear to be solid, and arguments for the investment appeal of the UK are likely to prevail over the negativity that has set in amid the shock of its separation from the EU.

© AP Photo / Richard Drew
Brexit Hits US Business Investment, Making Recession Likelier
Kristian Rouz – After the markets’ chaotic reaction to Brexit, dire predictions that the UK’s economy will slide into contraction in the near-to-mid-term have emerged, stemming from the anticipated disruption in trade and financial ties between Britain and mainland Europe. However, billionaire investor George Soros, who predicted and capitalized on the 1992 sterling crash devaluation, as well as a top Chinese banker and the British financial minister have vouched for the long-term strength of the UK’s economy and financial sector. The post-Brexit anxiety might be limited to the short term, as its depth has turned out to be more modest than previously anticipated, owing more to the global uncertainty rather than domestic UK factors.

The UK’s Chancellor of the Exchequer George Osborne reassured investors and markets participants of the economy’s resilience to domestic and foreign shocks in the aftermath of the ‘Out’ vote in the referendum to leave the EU. While the volatility in international finance is bound to increase, not least due to Brexit, the finance minister said, the British economy is nonetheless sustainable, and able to weather the implied disruptions in trade and investment disruptions due to the country's capacity for growth. He argues that  the long-term prospects for the UK would hardly reflect the effects of Brexit.

"Our economy is about as strong as it could be to confront the challenge our country now faces," Osborne said, speaking at a press conference on Monday for the first time after the referendum results were announced on Thursday.

Indeed, while many observers have cited post-Brexit risks as opening the prospect of a recession in the UK, possibly forcing the Bank of England (BOE) to cut its base interest rates, the weaker pound, now trading at $1.34 compared to its regular trading gauge of $1.41-1.60, is a  major upside factor for British manufacturers and exporters. The BOE's current level of borrowing costs is at 0.5%, and if the non-financial sector gains momentum, the regulator could be prompted to raise its rates in order to boost the nation’s safe-haven appeal, erasing post-Brexit fears.

The BOE has already announced its package of £250 bln, which it is ready to pour into the economy in order to provide sources of short-term growth.

Meanwhile, George Soros, who predicted the pound’s devaluation in 1992 in a move that earned him billions, didn't bet against the pound before Brexit. It seems like he was right again: while global financial institutions, including Deutsche Bank, were expecting the sterling to plunge to as low as $1.25-1.29 in the event of Brexit, that never happened. Brexit, however, remains a major risk, Soros said – that is, for economies outside the UK.

“Now the catastrophic scenario that many feared has materialized, making the disintegration of the EU practically irreversible,” Soros wrote in the aftermath of the vote.
Soros did not close his “long” sterling positions before Brexit, meaning he might be anticipating upward dynamics in the currency’s FX rate. That will only happen if the economy gains momentum regardless of financial turmoil, allowing higher BOE rates.

In China, one of UBS Group’s top bankers, Eugene Qian, said markets have “overreacted” to Brexit posting losses in stocks and FX trading, even though the event was not as dramatic as previously expected. Longer-term investment planning, Qian said, won't be subject to a correction in the wake of Brexit as the UK’s vote won't have any major long-term effects.

“Economically, a lot of Chinese companies still see the UK as a market where it does have a lot of potential to collaborate,” Qian said.

In the Brexit’s aftermath, roughly $2.5 trillion in capital evaporated from global equity markets; hoowever, in the longer-term, the UK is still an appealing investment destination for capital originating in emerging markets.

“It pays to pause a little bit” to think, Qian noted. “It’s wise to pause.”