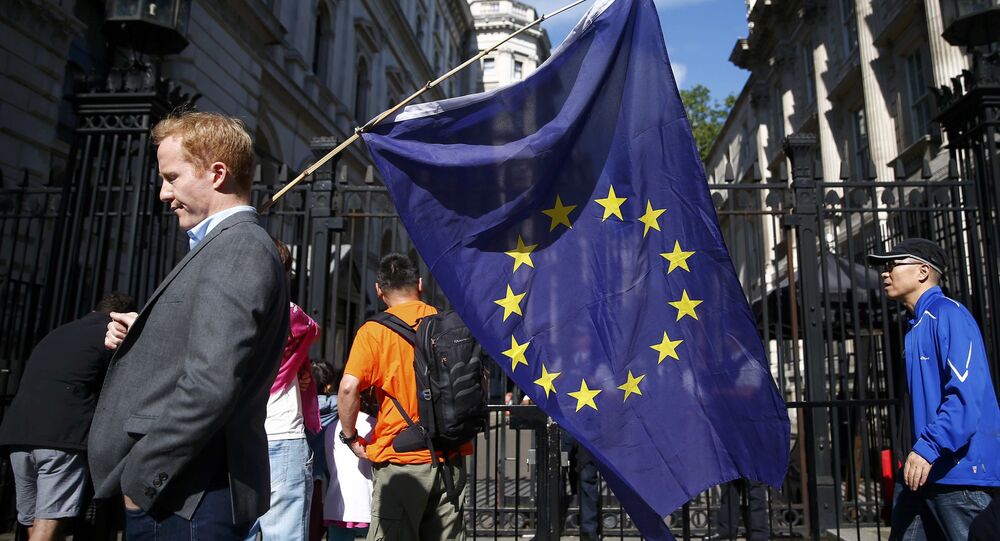 Prime Minister David Cameron is to step down by October after the UK voted to leave the European Union. Radio Sputnik discussed Brexit and the future of Britain with Ian Dunt, editor of politics.co.uk.

David Cameron said he would attempt to "steady the ship" over the coming weeks and months but noted that the country needs “fresh leadership.”

The “leave” camp has accumulated support from almost 17 million voters, while the “remain” campaign got about 15.8 million votes. UKIP leader Nigel Farage hailed it as the UK's “independence day”.

In an interview with Sputnik, Ian Dunt said, “Even yesterday the poll came out showing that there is a massive lead for remain, it’s really not at the top of the feed of priorities right now but this is total crisis for the polling companies. Now we can really not prevent any political events in this country.”

© AFP 2020 / GLYN KIRK
Brexit Gives Europeans Their Voice Back, Exposes EU As Undemocratic Venture – Die Linke
He further said that he was certainly not expecting this as it was a tight result. Talking about what will have to be renegotiated in the next couple of years; Dunt said that Britain will try to prolong the two year time period in order to renegotiate the multiple trade deals.

If Britain does not manage to renegotiate all these deals within the given time span, there would be an economic catastrophe. The fact is that the European leader that Britain will negotiate with, first of all overshadows Britain and they know what will happen after two years, as they realize the consequences, it puts them in a very advantageous negotiating position.

According to the editor, Britain may end up with some really bad trade deals. He further spoke about the economic consequences of the Brexit and how France has taken over Britain economically.

Talking about what makes the British economy work; Dunt said it is primarily stability. “When things go completely frenzied in Spain, for example, you can always deposit money here and be certain that it would be okay whether it’s in banking or in property. That is not the case anymore. That reputation of stability right now seems like a nostalgic dream of a long lost era,” the editor said.

According to him it is difficult to build a positive and upbeat image of how this would proceed.

Talking about how it would affect the EU and what would be the consequences there, Dunt said that he would be cautious to predict anything right now because of a few factors.

“Britain is a large economy so it is more viable to consider these sorts of things than a smaller economy which tends to benefit more from the EU. Britain never really told a story about itself which was about being tangled up in Europe it was always this thing about being an outsider,” the editor further said.

Chaos Over UK Markets, Currency and Jobs Due to Brexit