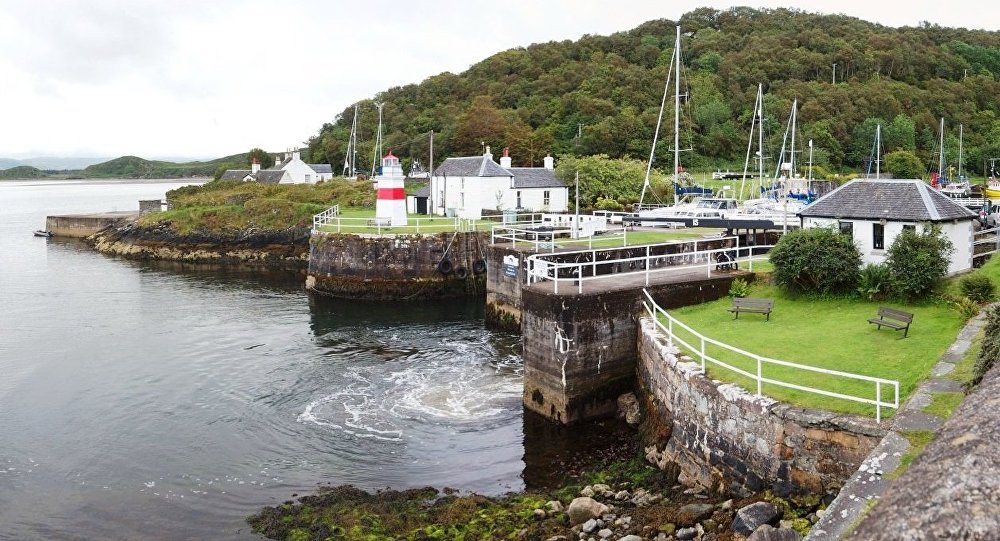 With property prices in central London higher than they've ever been - US$740,000 (£500,000) might get you a central 400sq ft studio apartment, maybe a separate bedroom if you move out of the city center, but you'd be hard-pressed to find a 3 bedroom cottage.

But North of the border, off the West coast of Scotland, your US$740,000 could secure you a 3-bedroom cottage, with a 1-bedroom guest outhouse, boathouse and pier, on your own exclusive island.

Set amid the stunning scenery of Scotland's West Coast, Harbour Island sits just opposite Crinan Harbour — a well-known landmark situated at the point where Crinan Canal meets the Sound of Jura.

Andrew Perratt, the head of Scottish residential sales at Savills, the agency managing the sale of the island, told Sputnik that selling an island is not an unusual event.

"The West coast of Scotland has many islands of which we will typically see maybe three or four coming to the market each year — this one is quite unique because it's so close to the mainland."

While it may be close to the mainland, it still does require a short boat ride, but prospective buyers can rest assured that they need not charter their own boat, a Savills agent will sail you over, no doubt to the envy of all their colleagues stuck in the office.

"Part of our offering as an agent is that if clients want to have a look at the island, we will take them to the island and show them around — in the right weather, there's no place I'd rather be," Parratt told Sputnik.

@hansmollman if we Brexit I want to run away to a remote island, somewhere near Tahiti & hope you come with me

House prices in rural Scotland are, understandably, much-much lower than city center trends, but this island comes with a price tag that has turned many heads. Parratt was hopeful that the unique opportunity could attract interest from around the globe.

"Typically islands appeal to very busy people, people that have very hectic working lives in a city and they want to escape that lifestyle for something completely different — the polar opposite to their busy midweek lives, and the island offers that. It's not unusual in the previous islands that we've sold we've had interest from America, from the far East, from Australasia, we are expecting we will see some international interest in this as well."

Perhaps the island will attract interest from those upset with Thursday's (23 June) EU referendum vote, looking to create their very own island utopia.

EU Referendum: Scots Say 'Stay In' - in the Most Scottish Way Possible