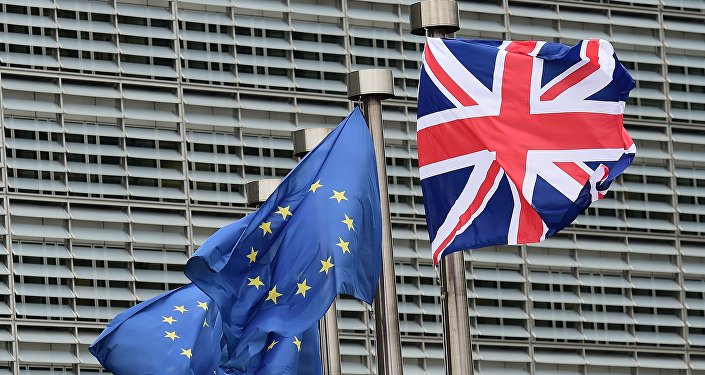 © AFP 2019 / EMMANUEL DUNAND
Sinn Fein Party Claims Brexit 'Bad for Ireland'
EDINBURGH (Sputnik) – President of the main Irish republican party Sinn Fein Gerry Adams called on UK voters on Monday to support a Remain vote ahead of the EU membership referendum despite what he described as the "democratic deficit" at the heart of the bloc.

UK citizens are set to vote in the referendum on the United Kingdom's EU membership on Thursday.

"Sinn Fein is very critical about the democratic deficit in the EU. But Brexit will be bad for the economy on this island, bad for business and investment, bad for farmers, bad for the environment, bad for workers’ and human rights," Adams said in a statement.

He added that Ireland did not want to see the return of border checkpoints between "the north and south" or restrictions on trade.

The Anglo-Irish conflict, known as The Troubles, which ran from 1969 until 1998 with the signing of the Good Friday peace agreement claimed over 3,500 lives and left over 47,500 people injured. Despite the agreement, the conflict still remains unresolved. Protestant and Catholic militarized organizations still persist in Northern Ireland.