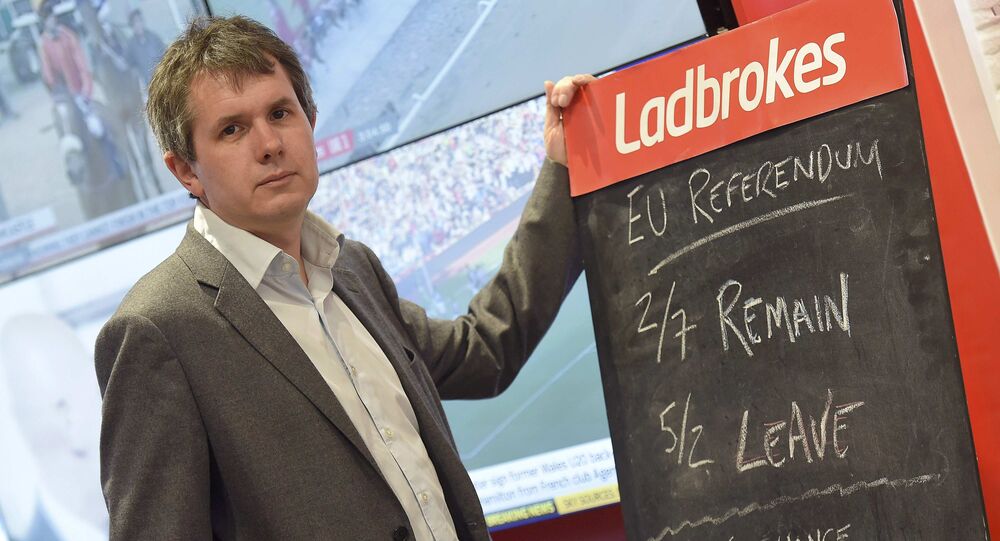 Place Your Bets: The Smart Money Is on Remain, Bookmakers Tell Sputnik

Polls can ebb and flow, they fluctuate with the tide of public opinion, but bookmakers have far too much riding on events to call them wrong. As political betting has grown in popularity, bookmakers have earned a reputation in predicting elections.

Ladbrokes: 95% of money staked today has been for REMAIN #EUref pic.twitter.com/lkiIg0en5G

Sputnik spoke with Ladbrokes' head of PR, Alex Donohue, who said that political betting has grown massively in recent years, especially since the Scottish independence referendum in 2014.

"We think [the EU] referendum will be the biggest political betting event of all time, we think across the industry there could be anything up to USD$146 million (£100 million) riding on the outcome of the vote on Thursday, so it's a pretty big deal for us."

"Polling and betting are two very separate things — a poll is a snapshot of voter intention on any given day, or given moment, it represents the opinion of a very small sample size at a given point on how they intend to vote. Betting is all about predictions — it's about people taking money out of their pockets and placing a bet on a prediction about what they think will happen in the future," he added.

BREAKING: Shop customer has just placed the biggest #EUref bet yet, £35,000. Remain backers are coming out to play! pic.twitter.com/JxeQN7aMQQ

According to Alex, the best time to have placed a bet on the EU referendum would have been about a week ago — as the closer we get to the vote, the narrower the odds have become.

Today I've offered @Nigel_Farage a €I million charity bet on the result of the #EUReferendum https://t.co/t0bZhUIDYj pic.twitter.com/PgjJ2rV2dU

Close though the odds might be, Alex Donohue told Sputnik that the smart money is on a Remain vote — which he says looks around 75% likely, compared to a 25% likelihood of a Leave:

Brexit Vote: It's 'Provincial England vs London and Celts'