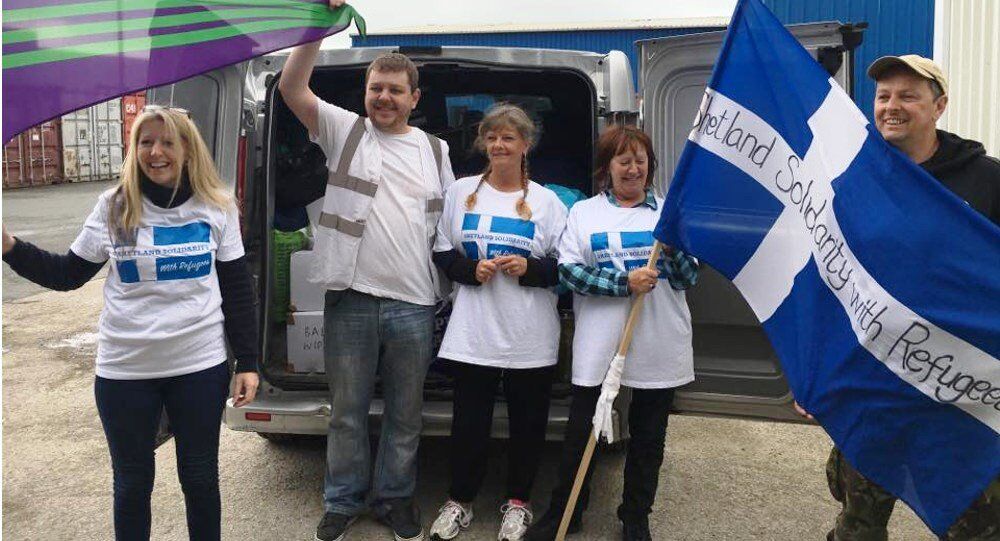 With the tag line "wir aa wan tribe" ("we are all one tribe") activists from the UK's most Northerly islands defied the French authorities ban on aid vehicles, taking a 'covert mission' through Belgium to deliver aid packages to refugee camps in Calais.

Organizers of the nationwide convoy, which had been planned for months, received a letter just two days before the event, stating that entry would not be allowed due to concerns over football hooliganism, terrorism and trouble caused by demonstrations at the camp.

While 250 vans from across the UK were turned away at Dover, the group from Shetland embarked on a lengthy journey encompassing 44 hours at sea and a 1200 mile drive, entering France via Belgium, to successfully deliver the aid packages to the camps in Calais.

Kaila McCulloch was one of the four Shetlanders that took part in the trip, and told Sputnik of the sheer determination the group had to deliver the collections they had taken in from across the Shetland Islands.

"We were on a mission, we had gathered in all the food and toiletries, a couple of tents and some sleeping bags. We felt that if we hadn't of made it to Calais we'd have failed — so we were going, and we were getting there at all cost."

On hearing the news, just before boarding the Shetland ferry, that the French authorities would be refusing the aid convoy passage to France, the group were concerned that authorities at the Channel Tunnel would have the names of all those planning to take part in the convoy. They decided to head to Hull to find an alternative route to mainland Europe.

"We took another 14 hour ferry from Hull to Zeebrugge (Belgium), and then took a relatively short drive to Calais."

"We weren't so worried on the ferry, we were more worried about entering France and Calais. We didn't want to get lost or pulled aside as obviously our van was full of food and supplies for the refugees. We did feel a bit nervous heading towards the Care for Calais warehouse in case we got stopped, and there was a police presence, certainly, in Calais."

When the group from Shetland arrived they were the first ones that had managed to get passed the French authorities, an achievement which clearly meant a lot to the Shetlanders.

"In Shetland, people are really, really kind and if there's ever a crisis or need for people to rally together Shetland is renowned for being super-good at doing that," McCulloch said, speaking of a community that had come together to provide support, and pointing to all the people who had made their journey possible. "The local hire group Star Rent-A-Car gave us a van for free, NorthLink ferries gave us free passage, Unison Scotland and Unison Shetland gave us money towards our fuel costs and Artmachine provided us with T-shirts."

Alongside clothing, toiletries and non-perishable food items, the group took letters of solidarity from school children in Yell, saying "we care" and "hopefully you'll [sic] life will get better. Love from someone who cares."

After 2 overnight ferries, and driving the length of the UK, the team arrived back in Shetland this morning, being able to use their original return tickets from Calais, giving a slightly shorter and less stressful final leg. "We arrived back home this morning as we all had to get back to work," though spirits are still high following their 3 day voyage.

After 44 hours at sea, 1,200 miles on the road to Calais, and defying the convoy ban, the Shetlanders are home. pic.twitter.com/CyHc94cq2o