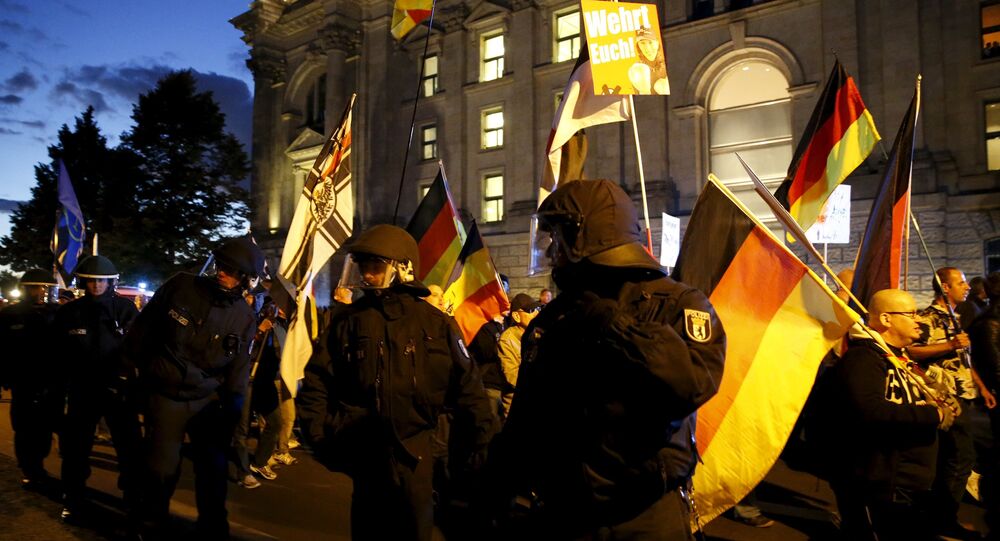 The residents of major German cities took to the streets on Sunday to express their protest against racism.

UN Adopts Russia-Proposed Resolution Against Nazism Glorification
MOSCOW (Sputnik) — All of them were marching under the common motto "Hand in Hand Against Racism," forming miles-long human chains, according to social media and local municipal press.

In Berlin, some 9,000 people took part in the demonstrations, in Munich they brought together from 3,500 to 5,000 participants, according to various estimates, while in Hamburg at least 7,200 people were involved in the protest action.

The city of Bochum literally witnessed "almost four kilometers" of human chain holding each other's hands in support of equality and human diversity.

© AFP 2021 / OZAN KOSE
How to Lose Friends: Ankara Losing its 'Last Ally in Europe'
According to live social media posts, the weather was rainy in some of the cities, but it did not stop the activists who brought with them bright umbrellas.

Germany has become a key destination for hundreds of thousands of migrants coming to Europe. According to German Interior Minister Thomas de Maiziere, the country received around 1.1 million registered migrants last year alone.

The rallies across Germany were held ahead of the June 20 Word Refugee Day, which is dedicated to raising awareness of the situation of refugees throughout the world.

How to Lose Friends: Ankara Losing its 'Last Ally in Europe'