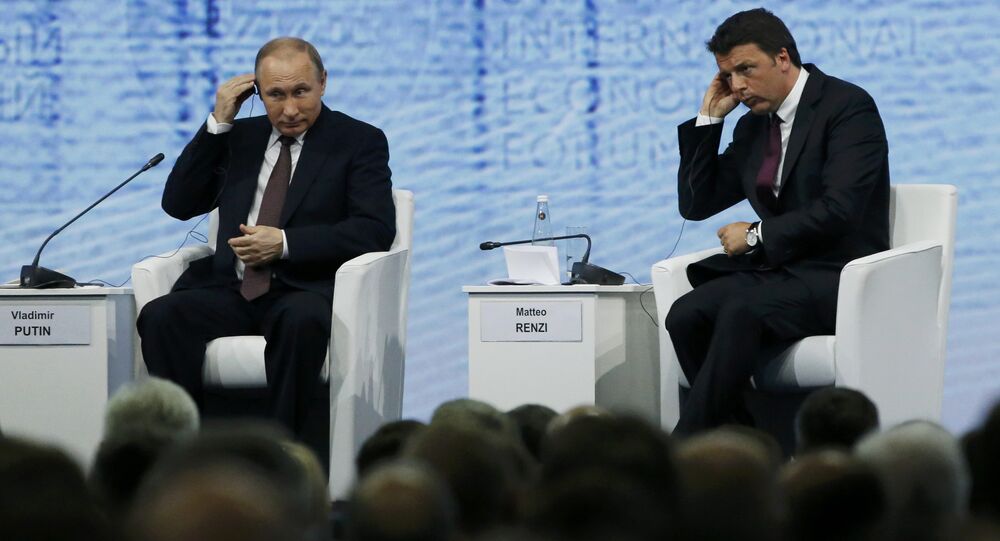 At a plenary session at the St. Petersburg forum on Friday, President Putin and Prime Minister Renzi offered visions for Eurasia that are in many ways complementary, Italian newspapers reported.

The session was focused on the theme, "Capitalizing on the New Global Economic Reality," and afterwards Italian newspaper Corriere Della Sera reported on the similarity of views expressed by Putin and Renzi about the future of Europe and its relationship with Russia.

"In the monumental city that Peter the Great built to force Russia's gaze to the West, Matteo Renzi staked out in grand style a revival of economic cooperation between Italy and Russia, and confirmed Moscow's role as a strategic partner in finding a solution to economic crisis, and in the fight against terrorism, extremism and intolerance," the newspaper wrote.

"'We must make every effort to turn the page," Renzi said regarding sanctions, and explained that Italy does not want their automatic renewal, but wants to discuss the issue at the European Council instead.

For his part, the Russian President also expressed a wish to end sanctions politics, explaining that Russia would end its counter-sanctions first, if it were sure that the EU would respond in kind.

© Sputnik / Aleksey Nikolskyi
Russia, Italy Sign Contracts Worth Some $1.5Bln at SPIEF - Putin
"He invites us to look forward, indicating common ground in the economy and business as demonstrated by the flood of agreements and memorandums of understanding signed with Italian and European firms at the forum. 'We are ready to take a step towards our European partners,'" the Italian newspaper reported Putin said.

"In his speech at the plenary, Putin, flanked by Renzi and Nazarbayev, offers a flexible, bi-continental vision of his country. The Kremlin wants to remind us that there is not only Europe in the Russian destiny. Russia wants to propose its Eurasian Economic Community make free trade areas, common industrial standards and enhanced cooperation with China, India, Pakistan and Iran."

"There were also a few jabs. Putin reminded that sanctions particularly affect European companies, while costing American ones very little. 'The US asks its allies to be patient. Why should they be patient?' he asks," Corriere della Sera reported.

"He addressed the Prime Minister, 'Matteo, why should you be patient?' Renzi laughs onstage. He also knows sanctions are expensive," the newspaper concluded its report of the session.

In another report, Italian newspaper La Stampa remarked on the personal relationship between Putin and Renzi.

"Bilateral relations, business, jokes, football. Matteo Renzi and Vladimir Putin seem to have found a 'chemistry' after their sixth private meeting – at the count of the Italian Prime Minister," La Stampa wrote.

"'We are here to build bridges,'" the newspaper quoted Renzi.

"That does not mean relations are devoid of friction," La Stampa continued.

"For Renzi, for example, the phrase 'Cold War' – mentioned by Putin – has no place in the 21st century, and the US is a 'great democracy' from which you can only learn. But there is no doubt that on the delicate issue of sanctions, Rome and Moscow are playing the same tune."

"The Russian President wanted to emphasize that Moscow is interested in a 'strong Europe' because a 'strong partner' is less influenced by 'external' pressure.' The allusions are crystal clear," La Stampa wrote.

"On the other hand, Putin used the forum to illustrate his great project to create an area of 'Eurasian integration,' involving China, India, Iran and the CIS countries, using the Eurasian Economic Union as the cornerstone. An ambitious vision that would ultimately create a free trade zone of over three billion people, and the EU, according to Putin, should be a part of it," La Stampa concluded.

Putin: Countries Should Accept as Many Migrants as They Could Afford