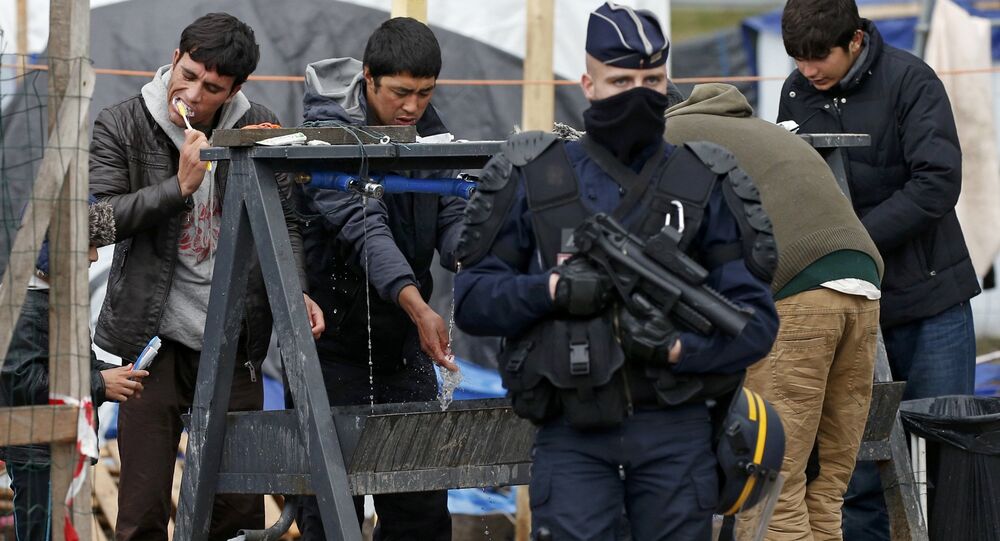 UK left-wing activists are wrangling with French authorities after Paris imposed a ban on a Calais-bound humanitarian expedition.

© Sputnik / Viktoria Ivanova
Some 5,000 Refugees Still Living in Calais 'Jungle' Camp - MSF
Radical organizations — including Stop the War, Stand Up to Racism and pro-Labour grassroot movement Momentum — rallied dozens of volunteers to take part  in the "Convoy to Calais" initiative, aimed at bringing humanitarian aid to refugees in the French camp. This included clothes, sanitary equipment and toiletries, to be transported in a caravan of 250 vehicles, including 45 trucks, scheduled to set out on Saturday.

​But 36 hours before the volunteers' departure, French authorities informed the Metropolitan police that the convoy would be blocked at the border.

"The Met has told us that because of French border control on this side of the Channel, inside of the Dover port, they'd stop us get on the ferry that we've booked and paid for," John Rees, a chief organizer and a member of Stop the War, told Sputnik.

"As for the reason, the letter from the French authorities is quite remarkable: it says that demonstrations have caused troubles at the camp — but we weren't even planning having a demonstration at the camp. It says there's a lot of football hooliganism in France — we're obviously not involved. It mentions terrorist threats — and again we have nothing to do with that."

​Rees said the real motive behind the prohibition was France's intention to stem the flow of refugees coming from Syria, Eritrea, Somalia and other countries. Calais camp is plagued by overcrowding, poor sanitary conditions, and a lack of basic goods.

"The French government is pretty hostile to refugees, as a matter of fact," Rees said. "They are trying to stop supply to refugees, exactly at a time when this aid is essential."

Still, in a rally held in central London on Friday, Rees and other organizers announced that if France were to really block them, they would throw an impromptu demonstration in the Dover port itself, and possibly launch a separate protest in front of the French embassy in London.

​During the rally, several speakers took on French and British authorities alike, denouncing the treatment of refugees and what they believe to be a general climate of hatred and racism currently gripping Britain and the West.

"Many Britons are now indulging in comments, racist comments they would have never thought making just weeks ago," Unison's trade unionist Roger McKenzie said. "Now they feel they can make it because they're encouraged by people like Farage, like some right-wing tories, by Trump in the US."

Joint secretary of Stand Up to Racism Sabby Dhalu underlined how, in her opinion, the "negative discourse about refugees" provided the essential context for the assassination of pro-refugee, pro-EU Labour MP Jo Cox killed yesterday in Yorkshire, presumably by a man with right-wing sympathies. The 42-year politician was commemorated with a moment of silence at the beginning of the rally.

Agony in the 'Jungle': French People Rally Against Migrants in Calais