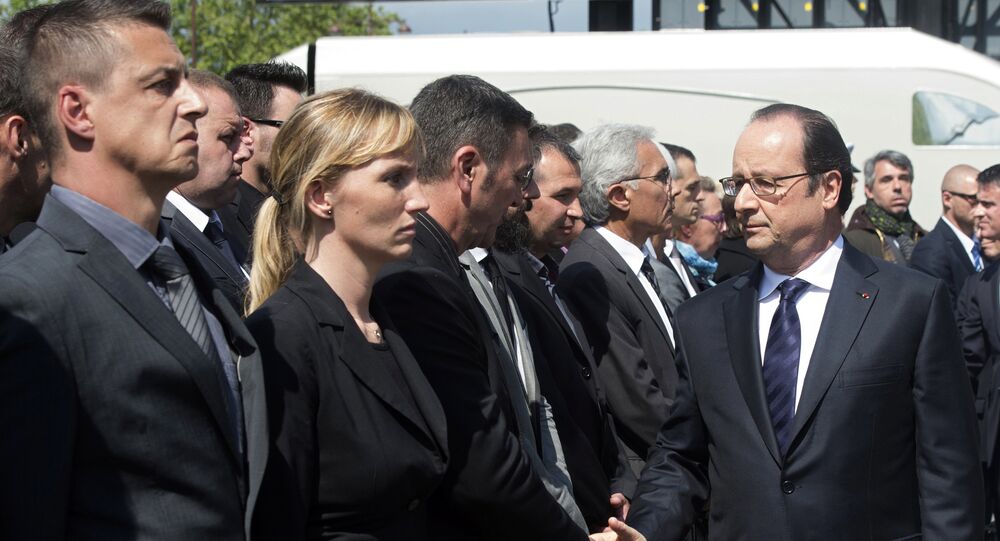 A French police officer refused to shake hands with the country's President Francois Hollande and Prime Minister Manuel Valls during a homage ceremony, according to the radio station RTL.

The incident occurred after a ceremonial speech honoring two policemen who had been killed by a gunman.

President Hollande passed along a row of police officers who were present at the ceremony, shaking hands with them. One of them suddenly refused to offer his hand to the president, and continued to stand still.

According to RTL, the policeman also refused to shake hands with Prime Minister Valls, who then approached the policeman and allegedly remarked on the incident. RTL did not elaborate.

French attacker live-streamed the killing of a policeman and his partner on #Facebook https://t.co/pbALODlZvM https://t.co/wI6wpotIMW

On Tuesday, France's Interior Minister Bernard Cazeneuve confirmed that Monday's attack on a police commander and his family near Paris had been an act of terrorism.

On Monday evening, a jihadist assailant stabbed 42-year-old police commander Jean–Baptiste Salvaing to death in the northwestern Paris suburb of Magnanville, and took the victim's three-year-old son and the boy's mother Jessica Schneider hostage in their home.

The murderer, who had recently been placed under investigation for alleged involvement in a jihadist recruiting cell, according to CNN, was identified as Larossi Abballa. After invading the couple's home, he declared his allegiance to the terrorist group Daesh (ISIS) before he was killed by riot police.

The commander's wife was also reportedly stabbed to death, but the child was rescued.

France to Boost Intelligence Activity in Fight Against Terrorism