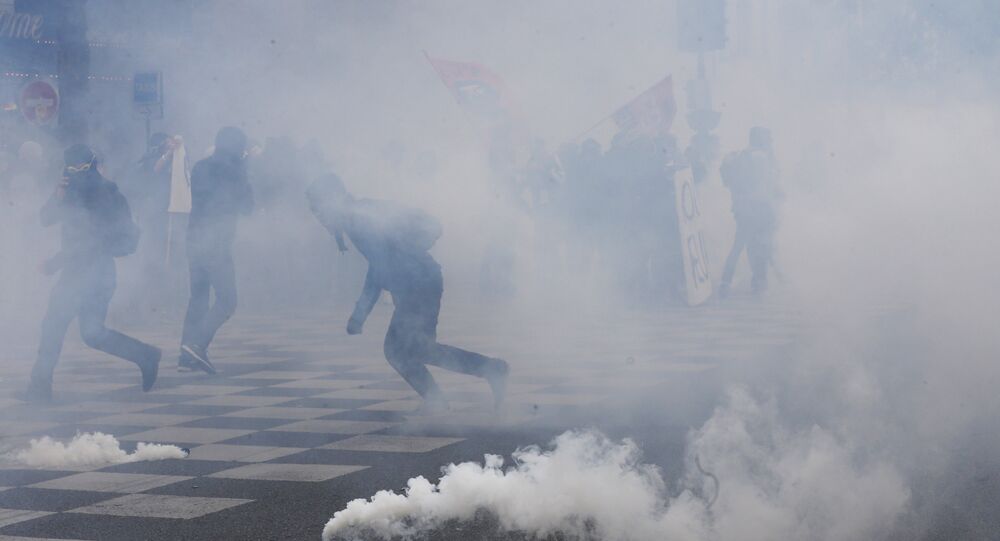 © AFP 2021 / Georges Gobet
Tear Gas, Smoke Fills Paris Streets as Trade Union Protest Turns Violent (VIDEO)
MOSCOW (Sputnik) – One of the producers was stricken down to the ground and hit by police officers.

"Police began to hit protesters and journalists – they hit my camera and threw me to the floor. Once I was down, they took off my gas mask and helmet, and carried on brutalizing me, while another officer smashed my camera. Finally, I wrestled free of them and escaped, though someone else got me on the chest, as I ran," one of the RT producers told the channel.

Another journalist was hit by a tear gas grenade in her face. Protesters, who were near the wounded journalist, helped the woman to stop the bleeding.

In a different part of the French capital, during a live broadcast protesters poured black paint over the camera lens of RT correspondent Harry Fear, who continued his work despite the incident.

A total of 40 people, mostly police officers, were injured on Tuesday during clashes between protesters and police in Paris.

In recent months, France has been hit by nationwide protests and sporadic strikes over a controversial labor reform bill. Among the reforms proposed by Prime Minister Manuel Valls’ government are highly unpopular attempts to increase daily working hours and simplify firing procedures.