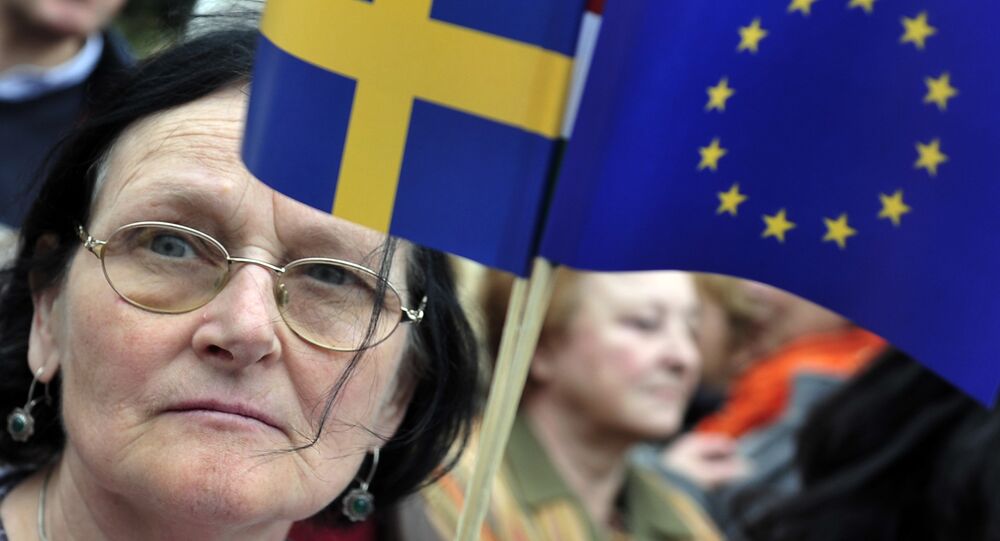 The whole of Europe is eagerly watching the recent developments in the UK, as a British exodus from the EU could establish a dangerous precedent. It could trigger a mass flight of member states, causing the Union to crumble like a house of cards. However improbable it may seem, Swexit, or Sweden's departure, may become a reality, too.

© Flickr / jeaneeem
Brexit Fever Proves Contagious: More Danes Want to Leave EU
On the surface, Sweden may seem a loyal supporter of the European Union, with its political establishment repeatedly lauding the union's comforting sense of togetherness and stressing the need for solidarity between the European states. However, ordinary Swedes do not necessarily share their government's affection for the European Union, polls show.

A survey, carried out by pollster Ipsos on behalf of the newspaper Dagens Nyheter in May, showed that Swedes are rather pessimistic about the future of the EU, with 51 percent thinking it is headed in the wrong direction. The survey mirrored the Swedish public's dissatisfaction with the EU's ham-handed treatment of the refugee crisis and frustration with too much power is being transferred from member states and vested in Brussels.

© Flickr / John Carkeet
'Fixit' Nears? Rebel Finnish Heavyweight About to Start Own Anti-EU Party
The same survey suggested that three quarters of Swedes (76 percent) believe the EU will be negatively affected should Brits vote to leave in June. Over half of the respondents (56 percent) argued that Sweden itself would suffer in the event of Brexit. This reflects the concern over the consequences of losing a close ally and going on the defensive when it comes to voting on European politics. A survey by NGO VoteWatch Europe identified Sweden and Denmark as the UK's closes allies, with Stockholm and London voting in synch 89 percent of the time.

"If the British leave, Euroscepticism in Sweden will grow. I'm worried we'll end up in a Swexit debate," political commentator and Moderate Party politician Ulrica Schenström told news outlet The Local in April.

A poll, conducted by pollster TNS Sifo on behalf of Swedish broadcasting network SVT, also revealed Swedes' growing disenchantment with the EU. In April, 39 percent of the Swedes thought the EU was beneficial, whereas 21 percent argued it was bad for the country. In contrast, 59 percent of the respondents accepted Swedish membership.

© Wikipedia / Magne Kveseth/ norden.org
Brexit's Side-Effects: Emergent Island Microstate in Scandinavia
In 1994 and 2003, Sweden held referendums on its membership in the EU and the Eurozone, which led to it embracing the European Union but rejecting the common currency by a narrow margin. For many, it is high time a third referendum is held, this time on an exit from the EU.

"We do not want to be subordinate to a union. We are a free people. But this does not mean that we cannot cooperate and trade with other countries," Bodil Eriksdotter of the EU-skeptical movement 'No to EU' told Swedish broadcasting network SVT.

So far, the majority of Swedes have remained loyal to the EU, figures from Statistics Sweden show. However, the level of support fluctuates greatly in different parts of the country. In Stockholm, where 6 out of 10 are for the EU, support is strongest, while in northern Sweden, four out ten favor the EU.