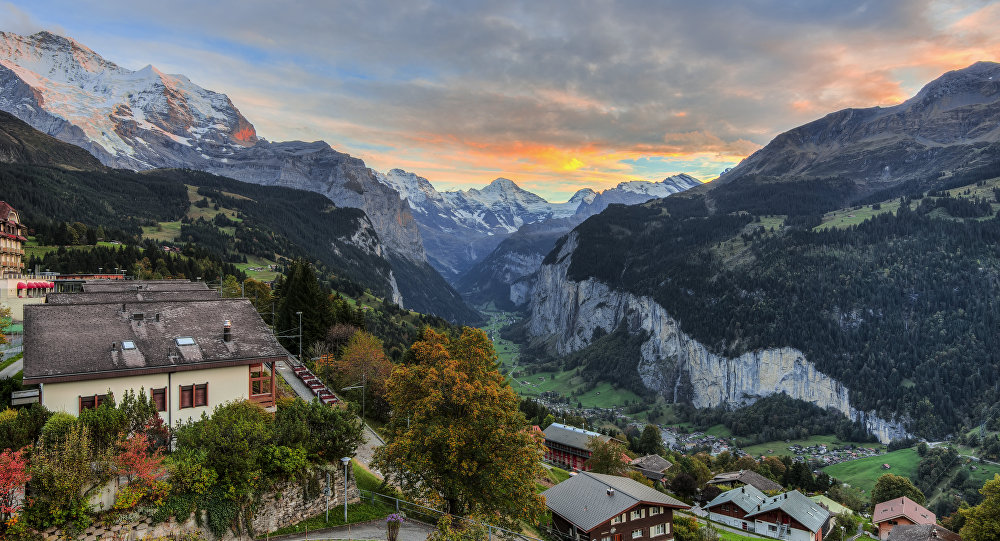 Residents of the Swiss village Oberwil-Lieli in the canton of Aargau have refused to accept ten refugees who were supposed to get temporary housing in the area and are even ready to pay 262,000 euros as compensation.

© REUTERS / Alkis Konstantinidis
Sympathy Card: EU Gov'ts Do More Harm Than Good, Call Migrants Refugees
The village has already made headlines in a number of global media outlets such as Daily Mail, Australia Network and even India TV only because its residents made a democratic decision not to accept refugees. Instead, the village — 300 inhabitants of which are millionaires — is ready to pay a huge fine of 290,000 francs, or 262,000 euros.

Mayor of the village, Andreas Glarner, is a member of the Swiss National Council. He is representative of the Swiss People's Party and adheres to rigid positions on migration policy.

"We think that the local assistance [in the countries where refugees come from] would be much more effective. What's important is that in this case no one would have to pay smugglers to get into a dangerous boat, and no one would have any problem with returning home, when peace is restored. And every franc invested at the local level would have a much greater value. So it is a kind of a protest against the totally inappropriate migration policy of the Swiss government," the official told Sputnik.

© AP Photo / Kerstin Joensson
Austrian Proposal to Keep Refugees on Islands Abolition of Political Asylum Right - Official
According to Clarner, the open-door policy of German Chancellor Angela Merkel is one of the reasons why so many refugees decide to take the dangerous path to Europe.

"In principle, each state that unconditionally accepts these and other refugees is responsible for the fact that new refugees take a boat and drown in the Mediterranean Sea. It is necessary to pay attention to the assistance at the local level to prevent this disaster," the politician stated.

At the same time, Martin Uebelhart, member of the civil movement for refugees in the village, is convinced that many local residents do not agree with Glarner's position. Commenting on the recent referendum, Uebelhart said he was disappointed with the results, but stressed that the village was divided.

"It was, of course, a big disappointment for us, but the decision was made with a narrow majority of just 54 votes from a total of 1,100 votes. The result could have been different. The village is divided and this can be seen clearly. The decision will be in force this year, but next year it should be made again. So we don't give up," Uebelhart said in an interview with Sputnik.

The activist sharply criticized Glarner's position, saying that many organizations already provide assistance in the war-torn regions but people are still forced to leave their homes.

"They leave their homeland, it is a fact. And it is part of the humane tradition — to help in such cases and unite efforts. The problem is, if we don't take these ten, they will have to be taken by other municipalities. We believe that it is contrary to the idea of a community of solidarity, which Switzerland actually is," Uebelhart said.

Why Claims of Russia's Role in EU Refugee Crisis Are Groundless