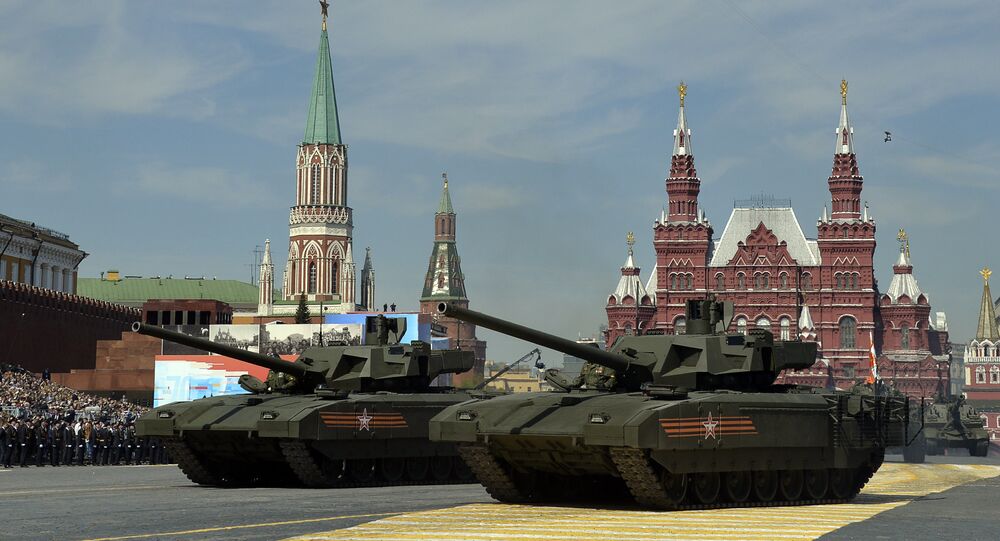 Apparently impressed by Russia’s all-new T-14 Armata tank, which was showcased during last year’s Victory Day parade in Moscow, many Western countries are looking for ways to upgrade, sometimes even radically, their existing tank fleets.

© Photo : Russian Defense Ministry
Not by T-14 Alone: New Machine Due to Join Russia's Armata Family
Britain’s BAE Systems has teamed up with several leading arms makers in a bid to extend the service life of the country’s 227 Challenger 2 main battle tanks.

The effort will focus to improve the tank’s infrared imagers, the commander’s sight, the fire control system and onboard electronics, Pavel Aksenov wrote for BBC Russian Service.

Germany's Krauss-Maffei Wegmann, the builder of the Leopard 2 tank, and France’s Nexter are mulling a joint venture to develop a new tank to replace the Leopard-2 and Leclerc tanks.

Not to be outdone, Italy is going to unveil the prototype of its new Centauro II wheeled tank at Eurosatory-2016 expo in Paris.

In January, Poland announced plans to modernize its 128 Leopard-2 tanks, and France said it would upgrade 200 Leclercs.

Ukraine too now has plans to develop a tank all its own.

Many experts attribute most of these recent tank modernization programs to the regional armed conflicts in the Middle East and Ukraine.

Andrei Frolov, editor-in-chief of Arms Exports magazine, said that the regional conflicts of the past few years had changed the attitude towards tanks.

“During all these conflicts, from Syria and Yemen to Ukraine, tanks proved themselves as a formidable means of fire support. Despite some heavy losses, including from antitank missiles, I think it would be premature to say that tanks are now a thing of the past,” he said.

The emergence of the T-14 Armata tanks during the May 9, 2015 Victory Day parade on Red Square produces a very strong impression in military experts everywhere.

With its unmanned turret, the crew seated inside an armored capsule in the front of the hull and an electronic fire control and communications system, the Armata stands out from the classic tank designs of the post WWII-era.