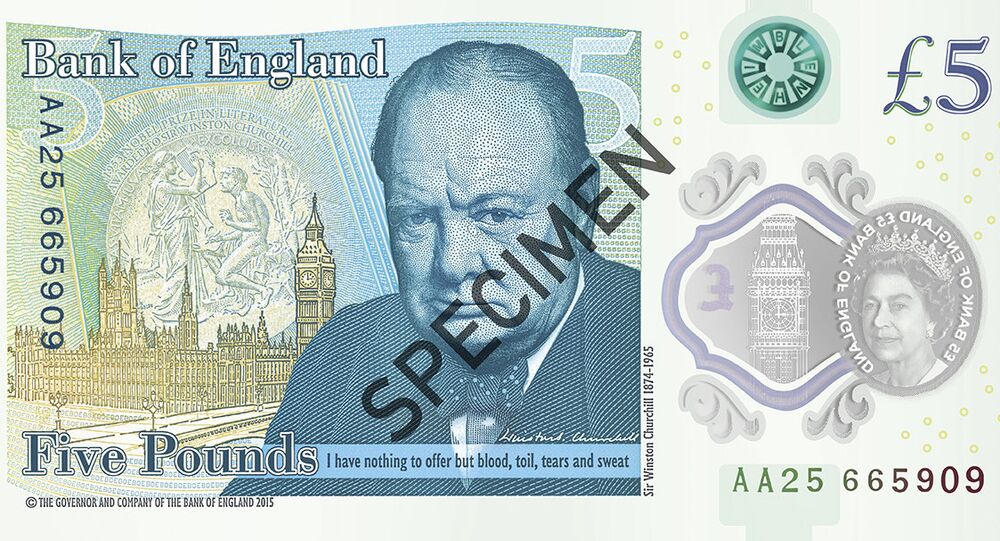 The Bank of England (BoE) has unveiled its new untearable £5 ($US7,3) note, featuring the former Prime Minister Sir Winston Churchill.

For over 300 years The Bank of England has been issuing banknotes and now, for the first time, the note will be made of a plastic material called polymer, which makes it untearable and safer.

It will also feature the former Prime Minister, Sir Winston Churchill and will be issued on September 13, 2016.

This maybe the first banknote to be made of polymer, but it certainly won't be the last. The £10 note and the £20 note will also be made of the same material, making it safer, stronger and more long-lasting.

The introduction of polymer banknotes, according to the Bank of England, allows for a new generation of security features which make it even harder to counterfeit. The note is also resistant to dirt and moisture and so remains in much better condition for longer. The strength of the polymer material means that "The New Fiver" is expected to last at least 2.5 times longer — around 5 years — even after being folded into wallets and scrunched up in pockets.

"The New Fiver will commemorate the achievements of the only Prime Minister to win the Nobel Prize for literature and one of the greatest statesmen of all time — Sir Winston Churchill. As he himself said, 'a nation that forgets its past has no future'," said Mark Carney, Bank of England Governor.

"Our banknotes are repositories of the United Kingdom's collective memory and like Churchill; our new polymer notes will stand the test of time. The New Fiver, the first of the Bank's polymer notes, is cleaner, safer and stronger. It incorporates advanced security features making the notes even harder to counterfeit. The polymer is also harder wearing, as well as resistant to dirt and moisture, so we expect it to last for at least 2.5 times longer."

Ben Crosland, Senior Manager of the Banknote Education Team explained the process that goes into making the new note.

"It takes a long time from the first stage to designing what the note will look like, which can start with choosing characters to adding different features that you want to put on the banknote. So once you have a design, you think of a material," Crosland told Sputnik.

"We were convinced of putting it on polymer, which is a flexible plastic material, as it's safer and stronger. Once you have all your materials lined up and your security features, then you make it. We sourced the polymer from Innovia Security. We then use a company named De La Rue that helps print our notes. At this point you reapply the foil and the shiny bits that you see on the banknotes, so on the £5 we have Big Ben and that is applied on the note along with the hologram," Crosland said.

The durability of the £5 note has also been increased, making it untearable. Crosland explains that the reason behind this was to try and make the note less prone to detrition.

"The current banknotes that we have out there are made of cotton and paper tears and can become tatty. It also absorbs moisture which makes them deteriorate. But with the polymer it repeals the dirt and the moisture and because it's made of plastic its more durable," Ben Crosland told Sputnik.

The new note, featuring the former Prime Minister Sir Winston Churchill, a popular leader during the Second World War, has also made the release of the £5 note an instant hit.

"The choice to have Sir Winston Churchill was made by previous governor, Lord Mervyn King. We have though, in recent years, opted for a different process. So for the £20 note you can see the character selection was done by the public, who nominated someone as long as they fell within the specified parameters. So it had to be a public artist and they had to have passed away. The Governor then made the ultimate decision. The £20 note is due to be released in 2020 and the £10 note will be launched next summer, featuring the writer, Jane Austin," Crosland told Sputnik.

Calling at Down Street: Churchill's Former Tube Station Bunker to Be Opened

Under the Hammer: Churchill's Blood For Sale - Not His Sweat and Tears

Minted Women: What Does a Girl Have to Do to Get on a Banknote