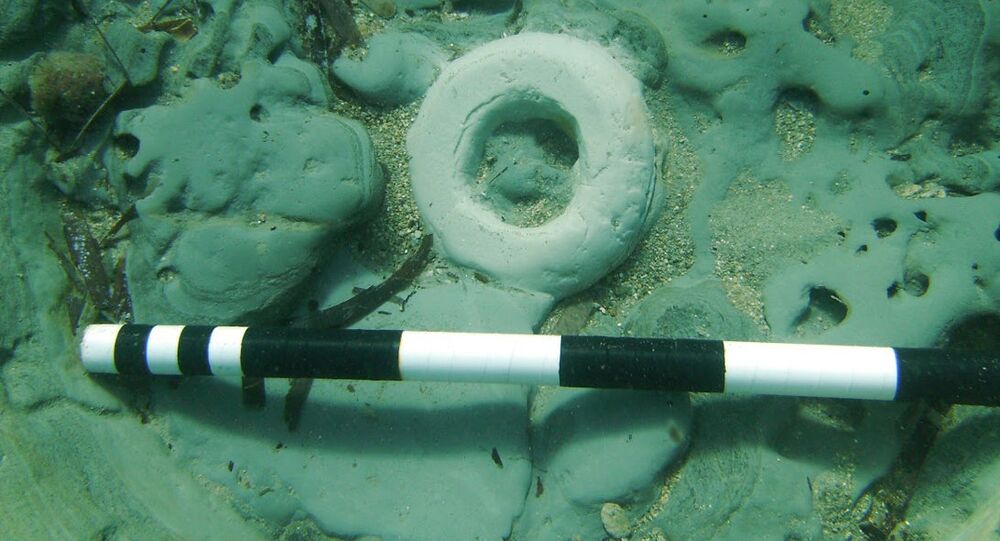 Scientists have discovered a "beautiful" ancient site in Greece in shallow waters off the island of Zakynthos, created by - no, not humans - but rather by microbes and methane.

"Snorkelers discovered what look like building remains off the Greek island of Zakynthos, so they had archaeologists come and look at it," Julian Andrews, a professor of environmental science at the University of East Anglia (UAE) told Sputnik.

"But they weren't convinced it was the remains of an ancient site — which is when a colleague of mine in Athens called me."

Archaeologists studied the site with Professor Michael Stamatakis from the University of Athens (UoA), but weren't convinced it was an ancient city or sea port.

​"The structures under the water resembled the bases of columns — leading to the initial confusion that it could be the remains of an ancient Greek site," Professor Andrews told Sputnik.

© Photo : University of East Anglia
A diver inspects what was thought to be an underwater ‘lost city’ in the waters of the Greek island Zakynthos.

A scientific research team was then set up comprised of UoA and UEA staff, who investigated in minute detail the mineral content and texture of the underwater formation in minute detail.

"We have instrumentations here at the UAE that allow us to look at the composition of the rocks and determine if methane is involved," Professor Andrews told Sputnik.

"And once we understand methane is involved in a series of reactions. driven by microbes living in the sediment — we know that with a particular bacterium they break down the carbon using the sulfate from the seawater as an oxidant.

"This produces an alkalinity which then allows the calcium carbon to precipitate, which allows the structures to form," Professor Andrews told Sputnik.

© Photo : University of East Anglia
"There were what superficially looked like circular column bases, and paved floors."

The site was created by a natural geological phenomenon that took place in the Pliocene era around five million years ago.

"It's a very beautiful place to visit; the structures are amazing to see," Professor Andrews told Sputnik.

"The structures act like a reef, fish can be protected and spawn — so it's good for fish populations and good for snorkling, which is popular, and good for tourism in Greece."

​The findings from the geological site have been published in journal, Marine and Petroleum Geology.

Could You Be the Owner of 1 Mln Euros of Sunken Treasure?