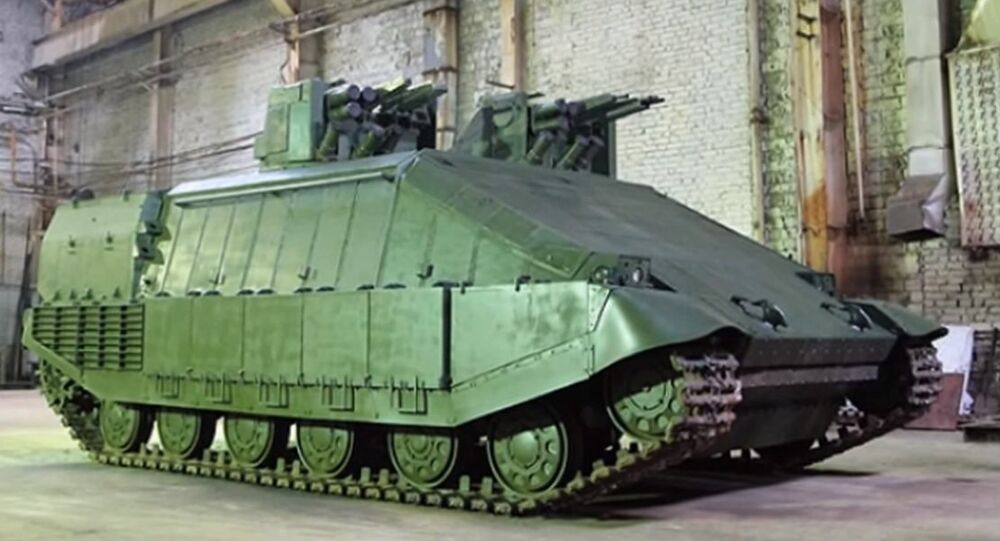 Ukrainian engineers have been tasked by the Ministry of Defense to modernize the Soviet T-64 tank into something comparable to Russia's fourth generation Armata tank, reported defense industry journalist Sergey Zgurets.

© Photo : Youtube/Rheinmetall Defence
Hardware of the Future: Brand New German Tank Showcases Capabilities (VIDEO)
Ukrainian engineers are working on a new tank for the Ukrainian army that could be ready for action by the end of the year, journalist Sergey Zgurets revealed on Thursday.

"The "Azov" engineering group is working on a few projects. They are the modernization of the T-64 tank into a "T-Rex," the development of infantry fighting vehicles and the "Azovets" combat vehicle. Azovets is really a prototype, and aspects (of the vehicle) will be implemented in other projects including infantry fighting vehicles," said Zgurets in an interview with Ukrainian news portal Apostrophe.

Zgurets, editor of Ukraine's Defense Express magazine, said that T-Rex is the most promising of the projects, based on the Soviet T-64 battle tank, which was produced from the mid-1960s until 1987.

"It (T-Rex) will be ready much faster than the armed drones that the government is talking about. I know how things are progressing – the documentation is almost ready, and talks are ongoing with the Ministry of Defense. This is just one of the projects to modernize the T-64 tank, and I think the work will be completed by the end of the year if all goes to plan."

"I think the T-Rex is the best option. It will have an unmanned turret, significantly enhanced protection and a new system of controlling gunfire, similar to the Oplot tank, which has an uncertain future."

Host photo agency
Armata-Based Heavy Infantry Fighting Vehicle to Be Equipped With Drone
"The main problem is ensuring that our units are protecting during night warfare. The Bulat tank only partially fulfils this function," the journalist explained.

Zgurets first revealed the T-Rex project in April, when he even went so far as to compare the prototype to Russia's next-generation Armata tank, which was unveiled in 2015 and uses the Armata Universal Combat Platform.

"This is a fourth or 4+ generation tank," wrote Zgurets, reported Lenta.ru.

"In terms of features it is even comparable to the most modern armored combat vehicles, including the widely advertised "Armata."

US Prompts Ukraine to Launch Probe Into Human Rights Abuses