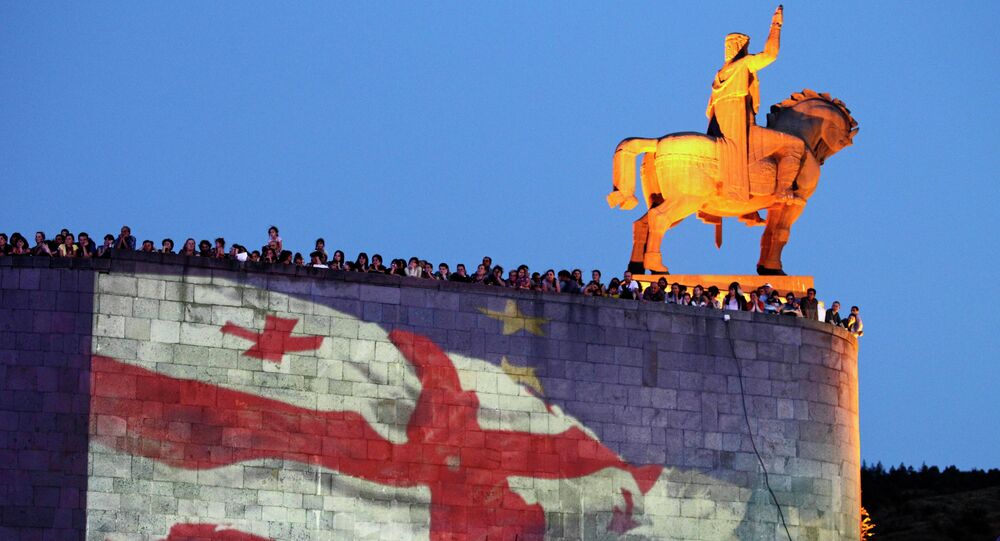 Brussels has decided to put the brake on promises of visa liberalization for Georgia, citing immigration fears. Official Tbilisi has not lost hope, telling Georgians not to expect any miracles, but analysts suggest that the EU's sluggishness in delivering on its promises has given a trump card to supporters of rapprochement with Russia.

The European Union has officially postponed a decision on visa-free travel with Georgia, Turkey, Ukraine and Kosovo also told to expect more delays, Reuters reported Wednesday, citing EU delegation sources. Visa liberalization was discussed by the Committee of Permanent Representatives, which consists of the heads and deputy heads of mission of the EU member states, in Brussels on Wednesday.

France and Germany were among the countries which favored postponing a deal on visa-free travel for Georgia, despite earlier promises that the Caucasian nation would likely receive the status by the summer. "We don't want to stop the whole process. We just want to be more cautious," an anonymous diplomat told the news agency.

© AP Photo / Georgy Abdaladze
Georgian Membership in EU, NATO 'Not Immediate Issue'
Berlin in particular is cautious about Tbilisi; officials are saying that a large portion of organized crime in Germany is linked to Georgian gangs.

The visa-free arrangement would allow Georgians easier access to Europe's Schengen area, consisting of most EU members plus several non-EU states, for up to 90 days, but not the right to work.

Late last year, the European Commission indicated in its reports on Georgia and Ukraine that the two post-Soviet states had generally met Brussels' requirements on visa liberalization, giving them a positive assessment.

Last month, meanwhile, EU representative Johannes Hahn expressed hopes that the citizens of Georgia, Ukraine and the Serbian breakaway region of Kosovo would be able to travel to Europe without visas by this year.

Days later, the European Council effectively suspended plans for a visa-free regime with Tbilisi and Kiev. Dutch Minister of Migration and Council President Klass Dijkhoff explained that while "visa liberalization has great advantages for the EU and third countries…we need an emergency brake for all visa-free countries to make sure that visa liberalization cannot be abused."

© Sputnik / Ramil Sitdikov
EU to Use ‘Emergency Brake’ on Visa-Free Deals for Ukraine, Georgia
Reuters recalled that the opening of Europe's borders to new countries is a hot button issue, given the 1.3 million refugees and migrants which flooded into the continent last year. It's also relevant given the June 23 referendum on the UK's membership in the EU. Furthermore, the news agency recalled that after its July 4-7 session, where majority approval would be required to enact the visa waiver, the European Parliament will next meet only in mid-September, effectively putting the issue on hold again.

Finally, the news agency suggested that for both Georgia and Ukraine, the visa-free agreement is a "carrot" or reward, provided as part of the "geo-political tussle" between Brussels and Moscow over influence in the former Soviet Union.

Commenting on the situation, Russia's Vzglyad newspaper recalled that while Georgian officials have not lost hope of imminent liberalization, some experts believe that if it is delayed again, "it will strengthen feelings of disappointment in European values among the local population."

© REUTERS / David Mdzinarishvili
US-Georgia Noble Partner Military Drills Wrap Up Near Tbilisi
On Thursday, Deputy Foreign Minister Gigi Gigiadze said that the issue of liberalization remains on the agenda of the meeting of the European ministers of justice and the interior scheduled for June 9-10, adding that he hopes a decision will be made then, despite the fact that the EU's permanent representatives have not been able to agree on the issue ahead of the meeting.

At the same time, Vzglyad recalled, Tbilisi has deployed officials to meet with French and German leaders to try to soothe their concerns. Earlier this week, Prime Minister Giorgi Kvirikashvili met with French President Francois Hollande in Bordeaux to discuss the issue, saying that he was pleased with the results of the meeting. Meanwhile, Interior Minister Giorgi Mgebrishvili visited Germany late last month, where he discussed the visa issue with German federal and regional officials.

Nonetheless, Georgia experts are not as optimistic as the country's leaders. Speaking to the newspaper, Soso Tsintsadze, a political and legal expert and professor at the Georgian-American University, recalled that at the moment, "after the recent terrorist attacks, politicians in countries like Belgium or France have been forced to take the views of their citizens into account; their societies do not want new migrants, however large or small the influx will be."

Their position, Tsintsadze suggested, is one of "once burned, twice shy. It's possible that European officials are prepared to give Georgia a visa-free regime, but the people of their countries are afraid."

At the same time, the analyst noted, "in addition to fears over migrants, there are also questions regarding domestic issues," both in Georgia and in other former Soviet states. "Ukraine is a mess in terms of corruption and other issues, in Moldova the communists could return to power. And all of this also affects European decisions," he stressed. "They are afraid of opening this door, since slamming it shut again would be very difficult."

© Flickr / Philippe Le Moine
The Border Issue: Is the Schengen Zone Really Under Threat?
Tsintsadze emphasized that if Georgia's visa waiver is postponed again or forgotten altogether, it "would be another argument in favor of the idea that Georgia should rely only on our own strengths…And of course, it will give a trump card to supporters of normalization with Russia."

For his part, Petre Mamradze, the head of the Georgian Institute of Management Strategy, told Vzglyad that in his view, ordinary Georgians' expectations regarding the lifting of visa requirements aren't very high. "Based on my observations, there are no inflated expectations in Georgian society about whether or not visa requirements are lifted. Everyone understands that they will not be able to work or study in Europe. In other words, little will change."

At the same time, Mamradze noted, if Brussels "takes Georgians for a ride" with the visas, it will be a "sobering factor" for many, "and they will begin to look at Europe more adequately," presumably without the rose-tinted glasses.

© AP Photo / Tolga Bozoglu
Erdogan Unleashes More Threats on Europe as EU-Turkey Deal Falters
Finally, Kirill Koktysh, an associate professor of political theory at the Moscow State Institute of International Relations, is convinced that the question regarding visa liberalization "is not whether it will take place or not, but why and how exactly it won't."

At the moment, Koktysh noted, the EU has found itself, in the case of Turkey specifically, in a situation where the money has been spent, but problems remain. "Therefore, deciding on any new steps regarding openness to the EU would amount to aggravating already unresolved issues."

The migrant problem, he said, is likely to stretch out over the course of at least several years, with the only question being how large it will be. Therefore, "today we do not know how the EU will look tomorrow. For starters, when the situation with migrants stabilizes, we will receive a qualitatively new EU." And only on this basis will it be possible to consider the future of visa-free regimes for neighboring countries.

Why Brussels Ready to Gift Visa-Free Regime to Georgia